And how much might it cost for Philly to pry the speedy wideout away from the Vikings? 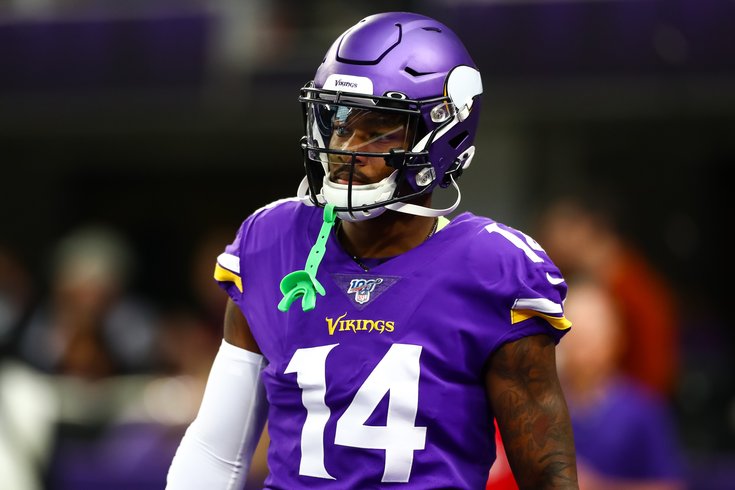 Minnesota Vikings wide receiver Stefon Diggs looks on before the start of a game against the Philadelphia Eagles at U.S. Bank Stadium.

On Tuesday night, something interesting happened on Instagram. Minnesota Vikings wide receiver Stefon Diggs scrubbed his account of any mention of his current team. And given we're in the middle of the slowest period of NFL news, many were quick to pick up the change and begin speculating that his is Diggs' way of suggesting he wants out of Minnesota and letting the 31 other teams know to start getting their trade offers ready for the Vikings.

Interestingly enough, there's a team right here in Philly that could use an upgrade at the wide receiver position. But would a trade for the 26-year-old wideout make sense for the Eagles? If Howie Roseman and Co. are looking to add a wideout in free agency, Diggs, along with Amari Cooper, might be the two best options for the Birds.

On Wednesday morning, ESPN's Adam Schefter joined the 97.5 The Fanatic morning show to discuss the possibility of Diggs being moved this offseason and whether or not the Eagles should be interested.

“I would say Minnesota probably doesn’t want to move him which will drive the price tag up.” - @AdamSchefter on Stefon Diggs

That last part, the part about the price tag, is going to be the biggest sticking point for the Eagles, who already have quite a bit invested in the wide receiver position, despite having little to show for it in 2019, and could look to improve that group in a draft loaded with wide receiver talent. Of course, they could grab a WR in the draft AND acquire one via a trade or in free agency.

Diggs, who is still just 26 and is under contract through the 2023 season, is an immensely talented wideout despite the fact that he never seems to be happy. After a career year in 2018 in which he caught 102 passes for 1,021 yards and nine touchdowns, Diggs caught nearly 40 fewer passes in 2019 under first-year offensive coordinator Kevin Stefanski (now the Browns head coach). But, somehow, he managed to best his yardage total from the previous season with 1,130 receiving yards for an impressive 17.9 yards per reception and six touchdowns, three of which came against the Eagles back in Week 6. In total, Diggs has caught 365 passes for 4,623 yards and 30 touchdowns in five seasons (70 games) with Minnesota.

So, what would it could for the Eagles to land a player of his caliber? Probably a premium draft pick, but when you consider what the Eagles have done at WR in the draft recently, that becomes an easier pill to swallow. Here's more from Dave Zangaro of NBC Sports Philadelphia:

Well, the Vikings are going to start any negotiation with a first-round pick at minimum. They should. All those reasons I listed above are reasons why they should have teams lining up for Diggs. It’ll be interesting to see just how bad things really are between Diggs and the Vikings, though. There was definitely frustration during the 2019 season but he finished out the year. Is it bad enough that it’s an untenable situation? If so, then the Vikings would lose some leverage.

If it’s a second-round pick, this is an easier conversation. The real question is whether or not the Eagles would be willing to give up a first-round pick. I kind of doubt they’d be willing to but you can make a real case for it. It’s easy to say the Eagles should just focus on the draft and take one of the many talented options with the 21st pick but there’s no guarantee they’ll hit. In fact, their history picking receivers, especially in the last decade, shouldn’t instill much confidence. They have drafted four Day 1 or Day 2 receivers since 2010: J.J. Arcega-Whiteside, Nelson Agholor, Jordan Matthews and Josh Huff.

None of them ever became what Diggs is right now. And there’s a good chance any player taken at 21 won’t become what he is either.  [nbcsports.com]

The Eagles' recent run of draft picks aside, why would the Eagles want to give up an asset for a player like Diggs when they can sign someone like Cooper in free agency for nothing? As is the case far too often in life, the answer is money.

While the Eagles would likely have to part ways with a high draft pick to land Diggs, he would probably cost less against the cap than a guy like Cooper, who will likely be looking to beat Diggs recent contract extension in free agency. Back in 2018, Diggs signed a five-year contract extension that will keep him under team control through 2023 at a very reasonable price. Here's a look at his base salary for the next four seasons:

Diggs is currently the 12th most expensive wideout in the NFL with a cap hit of $14.5 million in 2020, according to OverTheCap.com. But as more contracts and extensions get signed this year in free agency (and in the ensuing years while Diggs is still under contract), he's likely to continue to fall further down that list. For comparison purposes, Alshon Jeffery's base salary in 2020 will be $9.91 million, but his cap hit will be considerably higher ($15.45M), making him the sixth most expensive wideout.

That's not a bad price at all for Diggs, especially considering what he has been able to accomplish on the field.

However, the biggest reason the Eagles should be interested in Diggs is quite apparent to anyone who watched the team last season. Their receivers were a dumpster fire in 2019.

DeSean Jackson spent nearly the entire year sidelined with an abdominal injury, although he was spectacular in his one full game for the Eagles. Jeffery was the team's leading wideout, leading the group with 43 catches for 490 yards and four touchdowns. That's it. That was the Eagles most productive Eagles wideout in 2019 — yes, that means Carson Wentz finished the year without any of his wide receivers catching 50 passes or amassing over 500 yards — and this team, in an NFL that is more of a passing league than ever, somehow still won the division. Nelson Agholor had another down year, J.J. Arcega-Whiteside never developed, and Mack Hollins didn't even last the full year before being cut.

By the time they hosted the Seahawks for their wild-card playoff game, former practice squad player and converted quarterback Greg Ward was the Eagles' No. 1 receiver.

The end result was a team in which the three leading pass catchers were the two tight ends, Zach Ertz and Dallas Goedert, and rookie running back Miles Sanders, a guy who entered the season with question marks about his receiving abilities. That's not going to get it done.

Now, as the Eagles prepare for a busy offseason, it appears they'll once again have to retool the wide receiver position. Jackson will be back, but with another injury-plagued year under his belt, the questions about his health aren't going away. Agholor is almost guaranteed to walk in free agency. And the biggest wild card of the offseason might be Jeffery, whose contract is fully guaranteed for 2020. On Wednesday, Jimmy Kempski took a deep look at the Eagles' options when it comes to Jeffery, as he believes the team is looking to move on from the 30-year-old receiver following a season in which he was not only unproductive on the field when he was actually healthy, but was also causing distractions off the field.

So, theoretically, there's a chance that only one of the Eagles top four wide receivers (Jackson, Jeffery, Agholor, Hollins) from the start of last season will be back for 2020. That's Jackson.

Needless to say, the Eagles will need to address the position in the offseason, and if they're willing to pay the price to acquire him — and the contract that comes with it — Diggs could be a legit option for Philly.