Jeffery played in only 10 games this year and had his least-productive season as an Eagle in 2019. 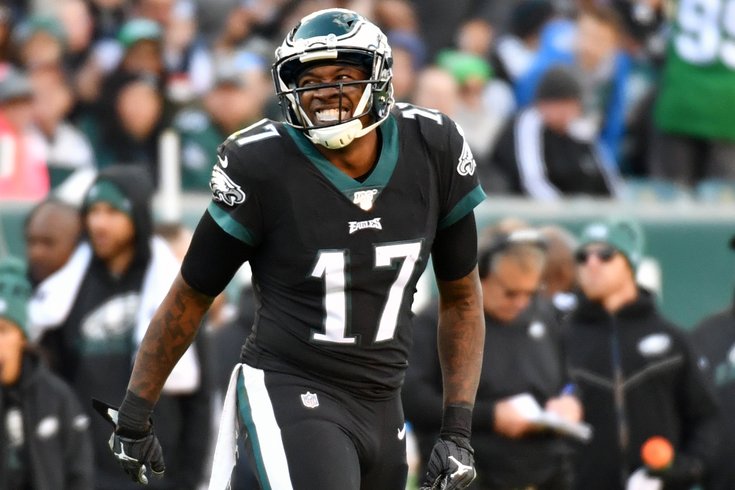 When Howie Roseman stepped to the podium at the NovaCare Complex on Wednesday for his end-of-season press conference, the first question he was asked was an expected one: his assessment of the wide receiver position and explanation for guaranteeing Alshon Jeffery’s contract for the 2020 season.

Before the Eagles even played a snap during the 2019 season, the team guaranteed the 29-year-old Jeffery’s contract for the 2020 campaign, a move which ultimately restructured his deal and provided the team with more cap space.

However, the move did not work out, as Jeffery suited up in only 10 games this season—the fewest since 2015 when he was a member of the Chicago Bears. Jeffery was in and out of the lineup all season due to a calf and hip injury, with his 2019 campaign ultimately ending when he was placed on injured reserve with a foot injury following the Eagles’ 23-17 victory over the New York Giants in Week 14. Jeffery’s injury, which was diagnosed as a Lisfranc fracture, could keep him on the sidelines into training camp and possibly the 2020 regular season.

Jeffery’s third season in Philadelphia was his least productive since coming over from Chicago in 2017, as he finished the year with 43 catches for 490 yards and four touchdowns. To make matters worse, Jeffery has two years left on his contract and is expected to count for $15,446,500 against the Eagles' salary cap in 2020. If the team were to release the former Pro Bowl wideout, the Eagles would incur a dead money cap hit of $26,106,000. If the team was able to trade him, the dead money cap hit would only be $16,196,000.

But Roseman, the Eagles’ executive vice president and general manager, explained the decision to guarantee Jeffery’s contract for 2020 and went far enough as to defend the veteran receiver.

"We had a conversation with Alshon before the season, and he took a pay cut in exchange for guaranteeing," Roseman said on Wednesday. "For us, we were trying to create as much flexibility going forward with our roster to create cap space to improve the football team. I think we forget some of the contributions to our team that Alshon has had: during our Super Bowl year, the injury he played with not missing a game and the contributions in that Super Bowl game, and last year [2018] he had 11 catches during the playoffs, and even this year in his last game he had nine catches for over 130 yards in the Miami game."

"Alshon is a talented player and he loves being an Eagle and he loves this city," Roseman continued. "I think about the moment last year, after the New Orleans game, when he went into that school and put himself out there."

But Jeffery is just one of several wide receivers who will be evaluated this offseason, as the Eagles got little to nothing out of their receivers this year. DeSean Jackson suited up in only three games this season—the fewest of his 12-year career—due to a core muscle injury and subsequently had the least-productive year of his career, catching only nine balls for 159 yards and two touchdowns. Like Jeffery, Jackson has two years left on his contract, but is expected to be ready for offseason workouts after ending the 2019 campaign on injured reserve.

Fifth-year wideout Nelson Agholor played in a career-low 11 games and had his least-productive season since 2016, hauling in only 39 receptions for 363 yards and three touchdowns. Like Jeffery and Jackson, the 26-year-old Agholor also finished the year on injured reserve due to a knee injury. Unlike his two elder statesmen, Agholor is slated to become a free agent this offseason.

Roseman said on Wednesday that the evaluation process had not yet begun.

"I think the first part about it is that we are going to sit down and meet with our coaching staff, with our personnel staff, over the coming days and the coming weeks and we're going to evaluate our football team," Roseman said. "We have not done that yet. Obviously the last couple days have been difficult with end-of-season meetings and talking to people and our players. When we look at who we started the season with and our starting three receivers, obviously they weren't out there in the playoffs. So we have to look at that. We have to look at every position and we have to look to improve at every position and we have to get with Coach and his staff and make sure that we are finding the players and the position requirements that they are looking for, as well."

What doesn’t help Jeffery and Jackson is Roseman’s commitment "to infuse youth in this team."