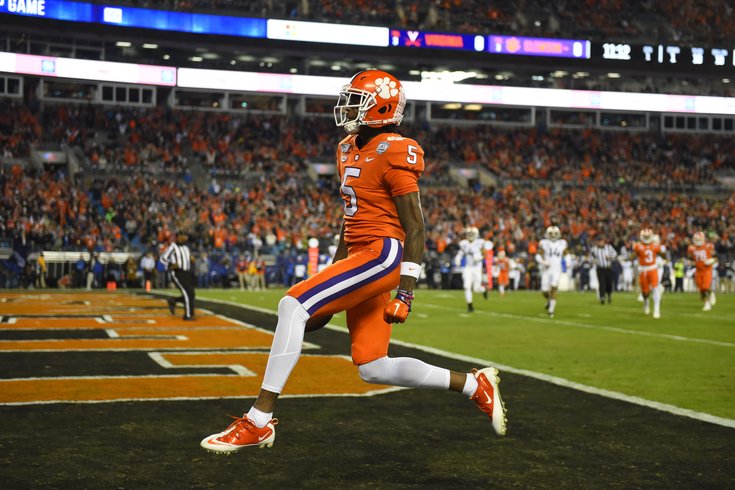 As a reminder, the Eagles are projected to have 10 draft picks this year, with two in the third round, and three in the fourth, depending on how compensatory pick projections go.

Higgins is a tall receiver with a huge catch radius who aggressively attacks 50-50 balls and makes plays with his speed down the field. His numbers:

Note those yards per catch numbers. A highlight reel:

I believe that the perception among Eagles fans is that they must find a "burner" this offseason, and I wouldn't necessarily disagree. While Higgins certainly has speed, he's not your classic burner. More accurately in terms of the Eagles' wide receiver position, in my opinion, the Eagles need everything, since they really don't have anything they can feel good about long-term.

Higgins would be an asset both in the red zone, which the Eagles seem to prioritize, as well as in between the 20's, where the offense plodded along slowly all season after they lost DeSean Jackson.

Gladney appeared at No. 13 on Bruce Feldman's freaks list this past offseason:

The top cover man in the Big 12, Gladney had the lowest passer rating allowed (46.9), according to PFF and had a team-high 13 pass breakups, which placed second in the Big 12. The 185-pound Gladney isn’t just extremely fast — he ran a 4.34 in the 40 this offseason — but he’s insanely strong for his size. According to the Horned Frogs staff, he squats 620 pounds, benches 400 and cleans 400.

Not only is Gladney perhaps a corner who can run down the field with big-league receivers, but his work in the weight room will give him a better chance of staying healthy than most of the corners already on the Eagles' roster. As you see in the video above, Gladney is a willing and able tackler, who also played on special teams for TCU.

I loved Winfield's father as a player when he was still in the league. He was an undersized corner, but tough as hell, and a playmaker. The younger Winfield, who plays safety, is a playmaker too, as he had seven INTs in 2019, fourth in the nation, to go along with two forced fumbles, with some of those plays coming in big moments or big games.

Like his father, Winfield is undersized, which the Eagles don't seem to care much about at safety. I think he fits in the Rodney McLeod role in the Eagles' defense.

Moss is in the same mold as Eagles backs past and present like Jay Ajayi (2017 version) and Jordan Howard, in that he's more of a power guy who finishes his runs. A look:

For a power guy, Moss had a good yards per carry average over his last two season, though there could be concerns about Utah putting a lot of mileage on Moss' odometer the last three seasons. His career numbers:

Moss could be a long-term power complement to the explosive Miles Sanders.

Lawrence had good numbers in 2018, when he had 54 tackles (10 for loss), four sacks, and three batted passes. Had he declared for the NFL Draft, he probably would have gone on Day 2, or early on Day 3 in a loaded D-line draft. Instead, he stayed at LSU for his senior season, got his ankle rolled up on early in the season, and has experienced a down-tick in production as a result.

With one game to play, he only has 25 tackles (five for loss), 2.5 sacks, and three batted passes, though he did save his best game of the season (four tackles, a half sack, and two batted passes) for LSU's huge win over Alabama.

I think he fits Jim Schwartz's scheme as a rotational penetrating DT, but would have concerns with his ability to take on double teams in the run game.

Taylor is a long, lean offensive tackle with good athleticism (he is a former basketball star) who will be competing at the Senior Bowl this year. Here he is against USF:

Of course, the Eagles drafted Andre Dillard, and they just gave Lane Johnson a monster contract extension, so they're set at both starting tackle spots for the foreseeable future. However, with Jason Peters likely moving on this offseason (I mean, right?), Halapoulivaati Vaitai potentially leaving in free agency, and Jordan Mailata not showing any significant progress this past offseason, the Eagles could be in the market for a Day 3 swing tackle.

Taylor's stock could rise in Mobile, but for now we'll project him here.

I was made aware of Jackson by a friend of mine who covers the team, who thinks Jackson reminds him quite a bit of Jalen Mills, in that he's an overconfident corner who is excellent in run support (four FF in 2018), but may have some speed limitations. I don't know what this says about me, but after watching him, I kinda like him.

Assuming Jim Schwartz is still the defensive coordinator this draft season, I'm pretty sure he'll like this guy.

A year ago, a prospect who made sense for the Eagles, because of their prioritizing of coverage skills at the linebacker position, was Wisconsin's T.J. Edwards, who had 10 career INTs, to go along with other impressive numbers.

This year, a linebacker prospect who makes sense for them is Wilson, whose physical measurements, production, and stats look a lot like Edwards':

Here's a little more about him:

Wilson would make sense for the Eagles early on Day 3, or higher if he tests well at the NFL Combine.

To begin, Cohl Cabral is an awesome name that sounds like a bad guy in a kids cartoon, so there's that. He also fits the profile of a versatile offensive lineman that the Eagles look for in the draft. As a sophomore in 2017, Cabral was the starting left tackle. In 2018, he moved to center. In 2019, because of the absence of ASU's left tackle, Cabral had to move back to left tackle.

Cabral's future in the NFL will likely be at center, but he has the length, smarts, and experience to play multiple positions along the offensive line. That kind of player makes sense for the Eagles, who need interior OL depth in the short term, and an eventual replacement for Jason Kelce at center in the long term.

Callaway is a speed receiver whose talents may have been wasted to some degree in Tennessee's offense. His production there wasn't great overall, but his yards per catch average should appeal to the Eagles, especially his 21.2 YPC in 2019.

While the numbers aren't where you'd like them to be, Callaway's talent is still pretty clear, as he made more than his share of spectacular plays:

The Eagles haven't had a threat at punt returner since "Chip Kelly era Darren Sproles." I think Callaway makes sense late on Day 3, as an immediate special teams contributor, and developmental receiver.