Eytan Shander: We owe Wentz, Pederson and other Eagles an apology after this season 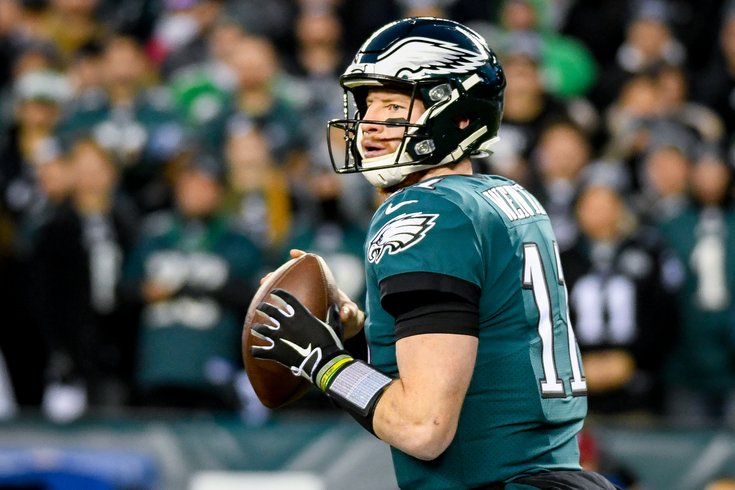 Carson Wentz looks to pass during the Philadelphia Eagles wild-card game against the Seattle Seahawks.

I felt physically ill for Carson Wentz. My stomach turned watching the initial replay of his head hitting the ground. That crumb Jadeveon Clowney and his dirty hit took out our QB. It happened in the worst possible manner, both physically and metaphorically speaking.

That hit not only extinguished Wentz, but also our hopes of seeing another playoff win.

But yelling at that clown, the officials or even the NBC broadcast crew wasn’t bringing him back. No human being claiming to own a soul would not feel awful for Wentz, especially as he watched his team play in the postseason while on the sideline for the third straight year. That’s why we look at the entire body of work this year and begin our “Eagles apology tour” with No. 11.

I apologize to Carson for thinking the Miami game was the culmination of a disappointing season. We — as believers in you — thought the ball security issues might be too much to defend, mainly when it’s costing your team wins, or the lack of receiving options might grind this offense to a halt. But all you did was clean it up and play your best football when it mattered the most, helping lead your team to four straight “playoff” type wins.

This was the year you proved the most to us, the year you silenced critics moving forward. At least it was supposed to be.

Despite playing all 16 games for a second year in the league, we still have idiots coming out to troll him.

Respectfully disagree. Not saying he’s soft but some dudes aren’t built for the NFL. Until Wentz actually plays a full season it’s a more than fair question. https://t.co/krUYZGqu6C

Either Danny has no internet access or he’s trolling for his radio show, one that’s judged on the amount of phone calls you take. He’s not injury prone! The regular season alone proved that — and this is a head injury on a dirty hit, not something he had any chance of avoiding. I apologize on behalf of those who won’t, Carson. You played your ass off and helped lead a bunch of hungry practice squad players to the playoffs.

But we are just getting started with this tour.

Find me a team — during a three-year stretch — that suffered as many injuries as the Philadelphia Eagles AND STILL found a way to make the playoffs each year. I tried to find one on my radio show with Harry Mayes on Monday, but we couldn’t even come up with a college team. Yet there were people calling for this man’s job during the middle of the season.

Here is where I have to offer the disclaimer: It’s OK to yell and scream at Doug after a loss without calling for his job. This man has earned that right in Philadelphia. Nobody has done more to keep a team together than Doug Pederson has in a long time. This was some New England Patriots-level overachieving with their talent on offense. Pederson should be given a medal for winning this division, regardless of the level of competition. Three straight seasons making the playoffs? Stop calling for his job. We all hated how we felt after the Miami loss, and if you wanted him out, you’re first up to apologize.

Let's move to the defense, which played exceptionally well down the stretch and through their playoff loss. People seem to use the “Well they were way healthier than the offense” argument as some slanderous attack on Jim Schwartz. Try flipping that on it's head and applying that same sentence with a positive light. A healthy defense with Schwartz at the helm allowed this team to take some chances. It helped the offense overcome any learning curve, creating a bubble of security for Wentz and his crew of practice squad misfits. All Jim Schwartz has done is provide a Top 3 home defense since arriving here.

It's insane to continue to call for this man’s job. Stop bringing up one performance in the Super Bowl as some crutch to fire Schwartz. They aren’t going to hold every team to 17 points – like they did to Seattle twice – but they did so in the game that mattered most, allowing a 40-year old backup a slim chance at winning that game. The Eagles should most definitely keep Schwartz, even if a dumpster fire comes calling.

Schwartz has earned the right to stay here without having his job questioned. And therefore, he’s owed an apology.

You Hate to See It

Lost with all the Eagles misery this weekend was Sean Payton exiting stage left. This man went out of his way to complain all last summer until he helped pass some ambiguous pass interference rule change. Well, in some bizarre twist of fate, the Saints season was ended on another shady play — and after all that, they didn’t even review it!

I’d like to see Payton – and the rest of this Rules Committee – take initiative and apply the same review technology to any hits to the head. Simply put, if we can review a WR pushing off 40 yards down the field, we can certainly have a ref review a hit to the head. No need to even stop the game, have someone in the booth or NYC review it while play is going on. If they deem Clowney’s hit targeting with his helmet, they bounce Clowney out of the game.

Tuesday marks the start of the Jeopardy! Greatest of All Time (GOAT) Tournament, where one man will be crowned the greatest Jeopardy! contestant of all-time. No questions asked. There can be only one.

Before it was announced this thing was pre-taped – forcing oddsmakers to pull all bets – we did get some good odds on the trio. The global market had the favorite James Holzhauer at +110, Ken Jennings at +115, and long shot Brad Rutter at +280. Those lines moved to see Rutter jump ahead of Jennings, and Holzhauer move to -200 before they were pulled.

Playing along at home, take Holzhauer While Rutter will finish second – despite actually being the best overall player – Holzhauer has mastered the art of timing out the button. It’s the difference of him hitting his daily doubles and losing in the first round. It’s chalk but that chalk is winning.

Finally, I want to personally thank Joe Krause and JAKIB Media Partners for making this column a reality. JAKIB Media is one of the leaders in providing top independent radio programming, and I’m so excited to introduce them to PhillyVoice.com’s 3.5 million monthly unique visitors. There are some tremendous opportunities to work with both myself and JAKIB Media through this amazing platform. Please join me in thanking Mr. Joe Krause @JAKIBMedia. Please email me for any interest in working with us.