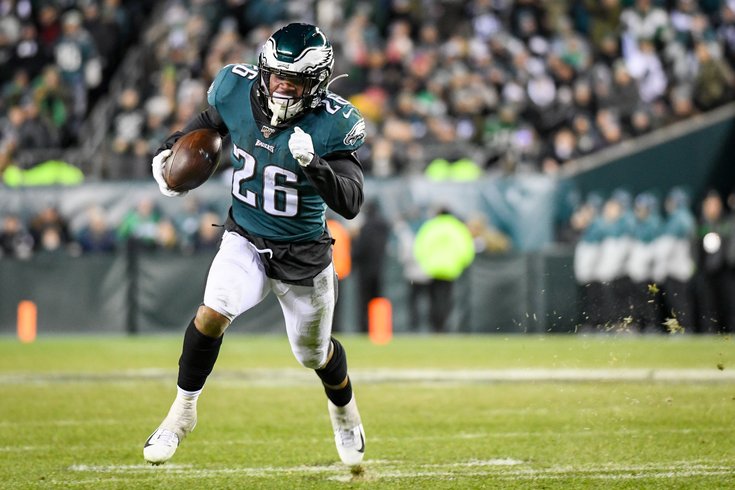 The Eagles' season came to an unceremonious end on Sunday when the lost to the Seahawks, 17-9, at the Linc. On Monday, the players returned to the NovaCare Complex for one last time this season to clear out their lockers and offer some final thoughts on the year that was.

And after a wild season that saw the Eagles go from a roster full of Pro-Bowl potential to a bunch of practice squad guys giving their all to try to pull off a playoff upset, there's a lot to unpack. We'll have plenty of time to discuss all of that this offseason, but let's first take a look at the news that came out of locker room clean-out day, because there was quite a bit.

From Malcolm Jenkins' contract demands to Miles Sanders' injury — and even what the future will hold for several key players — let's take a look at what was being discussed on the first day of Eagles offseason...

Malik Jackson and Brandon Brooks will be fine for next season.

There are plenty of injured Eagles players we could talk about on here — and we'll get to some of the other ones in a bit — but let's first talk about these two lineman.

Jackson, who was a big free agent acquisition this offseason that was supposed to help take some of the pressure off Fletcher Cox on the offensive line, didn't even make it through the season opener after suffering a dreaded Lisfranc fracture (foot) in Week 1. After missing the entire season, Jackson said on Monday that he should be fine by the time he returns for offseason work.

Eagles DT Malik Jackson says he feels like he’ll been healthy anywhere between April and June. Feels confident about being good to go for the 2020 season.

That timeline puts him in good shape to be more than ready for the start of preseason, which is good news for an Eagles team that invested $30 million over three seasons.

Brooks, who tore his Achilles' tendon in last season's playoff loss to the Saints but battled back in time to play in the season opener, was consistently rated as one of the best in the NFL at his position, but the Eagles lost him to a dislocated shoulder in the regular-season finale against the Giants. He is scheduled for surgery on Thursday and, like Jackson, expects to be ready in plenty of time for training camp in July.

Eagles RG Brandon Brooks thinks he’ll be OK for 2020 training camp. He’ll have surgery on his shoulder on Thursday, will rehab in San Diego for a bit, and will be back in Philly in February.

Again, this is good news for the Eagles, who just signed the 30-year-old Brooks to a four-year, $71 million extension earlier this season.

Malcolm Jenkins wants a new contract ... or else.

After skipping some of the Eagles' offseason workouts last year — but not training camp — in search of a better deal, the Eagles veteran safety did not mince words on Monday when asked about his contract status going forward.

#Eagles safety Malcolm Jenkins, who was unhappy with his contract and has only one year left said when asked about next season, “I won’t be back under the same deal.”

As McLane noted, Jenkins will be entering the final year of his four-year, $35 million contract next season, and has been among the top players at his position for years now, all while playing special teams and hardly missing a snap in his time with the Birds, but has not seen his contract adjusted to reflect the current market price for his position. Here's what we wrote about Jenkins last offseason when he skipped OTAs.

Jenkins, 31 [now 32], is one of the best and most versatile players at his position and has two years [now one] left on his deal. But as more and more safeties sign lucrative free agency deals each offseason, Jenkins has seen the value of his current contract decrease dramatically. Heading into the 2019 season, Jenkins ranks ninth in among NFL safeties in average annual salary ($8.75 million) and total guaranteed money ($21 million), according to OverTheCap.com. The total value of his contract ($35 million) also ranks ninth in the league at his position, but it's nowhere close to Landon Collins' $84 million deal with the Giants that makes him the highest-paid safety in the game.

Jenkins ultimately decided not to hold out of training camp after a convo with Jeffery Lurie, but with a contract year looming, that might not be the case this year.

He had a conversation with owner Jeffrey Lurie before the start of the season that made him feel valued, Jenkins said at the time, but to this point there hasn't been any meaningful movement toward a new contract.

"I'm not one to beg," Jenkins said. "I am a very prideful person, so I feel like what I put out there this year, what I put on tape, what I've given to this team is more than enough. I can't do any more. So for me, I feel good about that; that it'll be good enough for me to go into this offseason with certainty that I'll be fine."  [espn.com]

Jenkins has been one of the leaders of this defense since his arrival, and his play in big games, even in Sunday's loss to the Seahawks, proves that he deserves that pay bump. Whether or not he gets one — and, more importantly, whether or not it's in Philly — remains to be seen. But this is definitely one of the storylines worth watching this offseason.

Miles Sanders played through quite a bit of pain against Seattle.

Following the last play of the first half on Sunday, a meaningless run to wind down the clock, the Eagles headed to the locker room. All of them except for one: rookie running back Miles Sanders, who at the time was by far the most explosive player Philly had on offense.

And while he was able to come back in the second half, it was pretty clear that he wasn't 100%, which shouldn't come as any surprise as he was already playing through a sprained ankle he suffered a week earlier against the Giants.

On Monday, Sanders was seen leaving the Eagles locker room on crutches, and with a knee brace on.

Miles Sanders is on crutches, has a knee brace on his left knee. Asked if he needs surgery, he said, “Nah, I’m cool.”

As it turns out, Sanders was playing through more than just a sprained ankle against the Seahawks; he also suffered a left MCL sprain on that final play of the first half, according to Dave Zangaro of NBC Sports Philadelphia.

The 22-year-old suffered an MCL sprain on Sunday, according to league sources, but was still able to finish the game.

Sanders won’t need surgery and is expected to make a full recovery in time for OTAs in the spring to begin his second season.  [nbcsports.com]

That makes his 69 rushing yards on 14 attempts all the more impressive.

It's a tough end to what was an otherwise spectacular rookie campaign from the Penn State product, who rushed for 818 yards and led all rookies with 1,327 scrimmage yards.

The Eagles have a lot of decisions to make this offseason.

Finally, we begin to look forward a little bit, as the Eagles have 14 players set to hit unrestricted free agency this offseason. Those names include Jordan Howard, Jason Peters, Nelson Agholor, Rodney McLeod, Ronald Darby, Jalen Mills, and Timmy Jernigan. And that's only half of them.

After the game on Sunday, Jason Peters said he's hoping to come back for more, but with him blocking 2019 first-round pick Andre Dillard, there's a good chance the Eagles part ways with him this offseason, unless he's willing to come back in a reduced role.

Then there's Jordan Howard, who got off to a great start this season before the longest stinger injury known to man derailed his season (and led to the emergence of Sanders). Howard was on a cheap one-year prove-it deal, and prior to his injury, the 25-year-old running back was certainly doing that. And after finishing his first year with the Birds, Sanders is hoping to return to Philly for another season.

“I hope to be back,” Howard told The Philadelphia Inquirer, but he reportedly added that he’s not sure if that will happen.

Could an injury-shortened season help the Eagles bring back Howard on the cheap? Perhaps, but with Sanders proving he can be the lead back and Boston Scott showing he has what it takes to be an NFL running back, the Birds could opt to look elsewhere for help. Furthermore, it's unlikely Howard is interested in signing a prove-it deal on a team where his role will likely be reduced.

The Eagles also have questions at the skill positions, with Alshon Jeffery, DeSean Jackson and Nelson Agholor all finishing the season on the injured list. Both Jeffery and Jackson have two years left on their contracts, and while Jackson will presumably be ready to go for the Eagles offseason workouts, Jeffery's injury (a Lisfranc fracture) is likely to linger into training camp and possibly longer. And for those hoping to see the Eagles move on from Jeffery, his injury makes what was already an extremely difficult proposition (due to the way his contract is structured) become nearly impossible.

As for the Eagles' third starting wideout to begin the year, Agholor, his time in Philly is likely over after a knee injury shortened his season. He's going to get a second opinion on his knee in Pittsburgh:

Nelson Agholor said still has swelling in his knee, describes it as like being in a car accident. Said he’s heading to Pittsburgh to see specialist. Might need surgery. He’s free agent, but said more concerned about getting healthy. #Eagles

The bet here is that he signs elsewhere in 2020 — and probably comes back and has a monster game against the Eagles.

There are many other free agents to talk about, and we'll get to more of them as the offseason officially gets underway.

Brandon Graham is not an Orlando Scandrick fan.

One day, after his football career is over, Brandon Graham is going to have his own TV show, and it's going to be funny as hell. His postgame interviews with NBC Sports Philadelphia's Derrick Gunn are always a must-see, and he just has an infectious personality.

That being said, I would not want to cross Graham, who just finished one of his best seasons in Eagles green while battling through tendinitis in his knee. And one former player has certainly caught the ire of Graham: Orlando Scandrick, who briefly played cornerback for the Eagles this year before getting cut and going on TV to trash the Birds when they were at one of their lowest points of the season.

Then, on Sunday night following the Eagles loss, Scandrick tweeted the following:

On Monday, Graham, who finished the regular season with 8.5 sacks, brought up Scandrick unprompted.

Eagles DE Brandon Graham brought up Orlando Scandrick, unprompted, saying, “You gotta watch some people that you bring in who are about other things.”

And that's probably Graham putting it nicely. I can't imagine what he was thinking when it was all unfolding live.