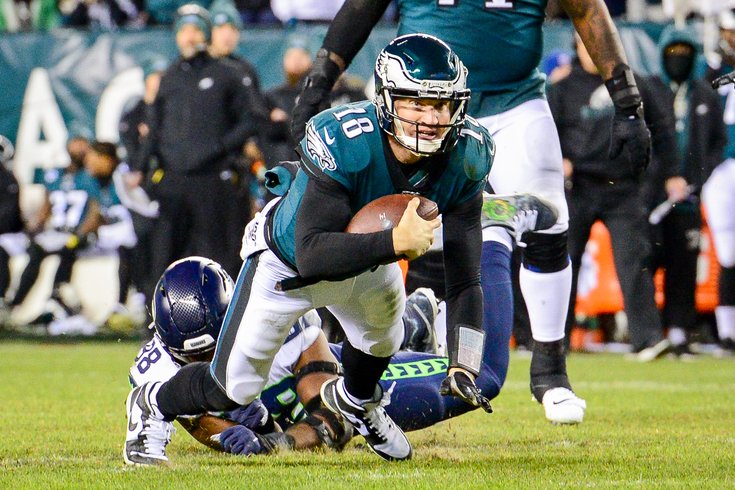 Josh McCown is sacked by Rasheem Green during the Philadelphia Eagles wild-card loss to the Seattle Seahawks.

(And yes, there are better things to get to, but my OCD will not allow me to not finish out this series for the season.)

Analysis: We've already covered this, but Jadeveon Clowney was successful in purposely trying to injure Carson Wentz, and the Eagles' chances of winning this game dropped precipitously after Wentz left with a concussion.

After the game, Peters said that he is still interested in playing football, but I can't imagine the Eagles bringing him back and having Dillard serve as his occasional replacement once again. We'll get to all that in our "stay or go" series, by the way.

Analysis: Sanders had a very costly drop in the fourth quarter, but he is going to be a really good player in the NFL. Jordan Howard didn't play a single snap.

Analysis: The Eagles signed Gibson on Tuesday and he only played two snaps, but he somehow made a bigger impact on the game than any of the Eagles' receivers when he drew a pass interference call. Arcega-Whiteside had a dreadful rookie season, which was capped off by a zero-catch outing against the Seahawks, in which three practice squad guys played more snaps.

Analysis: Ertz played 61 snaps with a lacerated kidney and a broken rib. I think he has proven his toughness. Goedert played all but two snaps a week after playing 100 percent of the snaps.

Analysis: Fletcher Cox had an excellent game, as he was disruptive all night in the middle of the defense. Overall, I'd say that the defensive line was "just good" this season, which isn't good enough when the defense is designed to operate in a way that requires the front four to get pressure without the aid of blitzers.

Analysis: Nigel Bradham played some tough run defense, but he had an opportunity to make a tackle on Russell Wilson in the open field that would have led to a punt in a crucial situation, and he could not get the job done.

Analysis: Jenkins played every single snap both this season, and in 2018. That is incredible in today's NFL. Yes, there may be some decline there, and yes, the Eagles need to get younger, but I don't think they can even consider moving on from him.

Only three cornerbacks played in this game, which is an oddity. Sidney Jones and Rasul Douglas both didn't play a single snap in the regular defense. Of course, they were the Eagles' second- and third-round picks in the 2017 draft.

Quite simply, the corners aren't good enough, and the Eagles need to spend significant resources there this offseason... again.