Doug Pederson says Mike Groh and Carson Walch will be back with Eagles, dodgy on Jim Schwartz 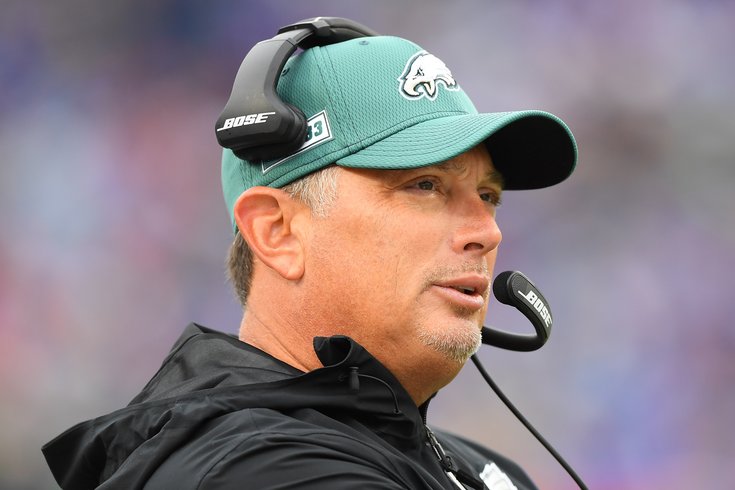 Will Jim Schwartz be back as the Philadelphia Eagles defensive coordinator?

The same, it appears, can't be said for offensive coordinator Mike Groh or assistant Carson Walch, who oversaw the Eagles disappointing receiving corps.

During the Eagles' end-of-season press conference featuring the head coach and general manager Howie Roseman, the duo was asked about the future of the aforementioned trio of coaches. And the exchange(s) that followed were interesting, even if they ultimately didn't provide much clarity.

Relatively early in the 30-plus minute session with the media, Pederson was asked about the futures of Groh and Walch after a down season for the offense, especially the receivers, who entered the season being ranked by some as the top WR corps in the NFL only to finish at the bottom of the NFL. Eagles receivers finished with 1,647 total yards, 78 fewer than Saints wideout Michael Thomas recorded on his own. And the team's leading wide receiver, Alshon Jeffery, finished with just 490 yards. To put that in perspective, that ranks 88th in the NFL this season, three spots behind Eagles rookie RB Miles Sanders.

Still, Pederson gave a ringing endorsement for both.

"I think both of those guys did an outstanding job for me this year," he told reporters when asked to evaluate their performances this year. "There were a lot of things we faced offensively, as you know, through adversity, through injury, through many different facets of trying to get the pieces together. And so my hat goes off to both of those gentleman, because of the gameplans that Mike and I and the offensive staff put together, first of all, and then here toward the end of the season, Carson Walch having a big impact on getting these young players ready to go, to play at a high level.

Pederson was immediately hit with a follow-up question about their statuses for next season.

"Yes, both of those guys will be back," he said.

Sure, we can sit here and debate whether or not that's the right call, and I'm sure we will at some point this offseason. And y\es, the Eagles receivers underachieved, but injuries certainly played a part and there is something to be said about the team was able to get out of a bunch of practice squad guys at the end of the season — but we need to keep moving, because this is where things took an interesting turn.

A few minutes later in the preseason conference, the topic of Schwartz interviewing for the Cleveland job came up, and Roseman again deferred to his coach.

"I love the fact that guys around the league and teams around the league are looking to my staff for possible head coaching candidates — Frank Reich a couple years ago and now Jim," Pederson said. "Jim's obviously been a former head coach and I think he would make a tremendous head coach again and his leadership and what he has brought to me and how I've been able to lean on him through his experiences as a head coach. Jim's done an outstanding job with out defense obviously, the improvement that we saw throughout the course of this season. I'm excited for him and his opportunity and wish him the best."

Sounds like a ringing endorsement. So that obviously means he'll be welcomed back, right?

"He'll be on a plane back here at some point after the interview," Pederson said with a laugh, before being pressed to give a real answer on Schwartz' future should someone else be hired by the Browns.

"Oh, yeah, part of the evaluation process and all that? I would assume yes," Pederson added. "He's currently my DC."

"I mean, yes, we have meetings," Roseman said.

MORE: What they're saying: How should Eagles address what will likely be a very busy offseason?

Either because of how different the answer was in comparison to the other about Groh and Walch, Pederson was asked to clarify a few minutes later about his defensive coordinator's status should he not get hired by Cleveland.

"Yeah, and listen, I'm in the process right now of evaluating and would love to have them all back, obviously," Pederson said. "We know what this league is about, and any time an assistant coach can get a promotion, here or somewhere else, I encourage that. But as I evaluate and look, we're only three days removed from the season so everything's still fresh in my mind, so we're still evaluating and all my coaches are in that evaluation process as well."

But that seems to contradict the previous answer on Groh and Walch he give just a few minutes earlier.

"Listen, I know what I said," Pederson shot back. "And, yes, but at the same time I'm still evaluating the whole process. They are still currently here, and I'm going to evaluate an assemble the best staff moving forward. But currently, yes, they are still here."

So, why the change? Perhaps Pederson jumped the gun by saying Groh and Walch would definitely be back, and in an attempt to backtrack those comments, Pederson put his foot in his mouth and made it sound like Schwartz was on thin ice. Or, maybe he is.

UPDATE [3:43 p.m.] — Or, maybe Pederson just misspoke? According to Pederson and Roseman NFL Network's Ian Rapoport, Pederson was sketchy on Schwartz' future because there's a chance he leaves no matter what the Eagles think of him.

On the #Eagles press conference with Doug Pederson: My understanding is Pederson’s answer on DC Jim Schwartz was because he feels Schwartz is a top candidate for the #Browns head coaching job & deserves it. Philly does want him back and is pleased with the job he’s done.

Of course, that explantation doesn't really fit with the series of events that took place in the press conference, and certainly doesn't explain why Pederson said he was still evaluating Schwartz moments after saying Groh and Walch would definitely be back. But at least it fits with the first answer about Schwartz, the one where Pederson praised him for the work he's done.

I guess we're just supposed to happen everything that happened after?

Anyone who's watched the Eagles defense in recent years knows it has its shortcomings — and fans have certainly made their discontentment known — but despite somewhat limited personnel at certain positions (namely cornerback and linebacker), Schwartz has done a solid job keeping his unit up to the task and giving his offense a chance to win week in and week out.

And the numbers back that up. Here's a breakdown from Dave Zangaro of NBC Sports Philadelphia for those who think the grass would be greener on the other side:

Since Schwartz became the Eagles’ defensive coordinator in 2016, and was given near complete autonomy over that side of the ball, check out where the Eagles rank in several key defensive categories:

During his time here, the Eagles have played six playoff games and have given up 20 or fewer points in five of them. Even including Super Bowl LII, they have given up an average of just 17.0 points per game in those six.  [nbcsports.com]

It's also worth noting that Schwartz still has another year on his contract, but he could theoretically leave the team to take the Browns head coaching job without an issue. However, if another team offers Schwartz a coordinator position that he's inclined to take, the Eagles would need to grant him permission to break his contract and take that job. In that sense, it could be a mutual parting of ways for the two sides. Of course, there's always the chance that Schwartz comes back for the final season of his contract, however he may be less likely do that without any certainty beyond 2020.

No matter how this plays out, it's definitely a storyline worth watching as we begin to shift our focus to the offseason.

MORE: Ranking the Eagles' 2020 offseason needs from most glaring to most stable