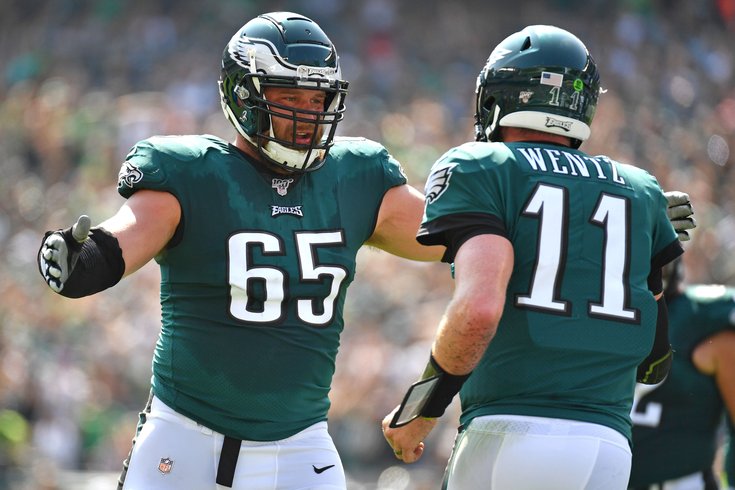 Eagles' offensive lineman Lane Johnson appeared on FS1's "Undisputed" on Thursday morning and praised Carson Wentz, as well as make a bold guarantee about the Birds in 2020.

Lane Johnson, the Philadelphia Eagles' three-time Pro Bowl offensive lineman, appeared on "Undisputed" on Thursday morning and touched on a number of topics – former quarterback Nick Foles, the Eagles' Week 16 win over the Dallas Cowboys and the origin of the dog masks during the Super Bowl run.

But two things stood out the most – Johnson's praise of quarterback Carson Wentz and his guarantee the Eagles two wins against the Cowboys in 2020.

Johnson, 29, has played seven seasons in Philly since entering the league in 2013 as a first-round draft pick. Skip Bayless, who hosts "Undisputed" with Shannon Sharpe, asked the Johnson how much better Wentz is than Cowboys' quarterback Dak Prescott.

After praising Prescott, Johnson showered love on his teammate:

"Carson, I think, answered a lot of questions this year, when you have a lot of those injuries, a lot of your stars out. He comes out there and is playing really consistent. Obviously you like to have him healthy for the playoff game, maybe make another push. But amongst all the criticism that he had this year, I think he did a good job of stepping up, ignoring it, and really just going to work. When I go into the building every day, I see a guy that's there before everybody and really putting in the time."

Bayless then asked Johnson about the PhillyVoice report from last offseason, when more than a half dozen players and sources close to the Eagles were anonymously critically of Wentz's leadership. Johnson said it was a difficult situation for Wentz to have to follow Foles' performance during the Eagles' Super Bowl run.

Later, Johnson made the bold prediction for next season that the Eagles would beat the Cowboys twice. The teams split the two games in 2019, both winning at home.

Johnson's Dallas prediction comes after head coach Doug Pederson guaranteed the Eagles would beat Dallas in Week 7, only for Philly to lay an egg and lose 37-10. So for Lane's sake, hopefully his prediction is correct.

You can watch Johnson's entire appearance on the show here.