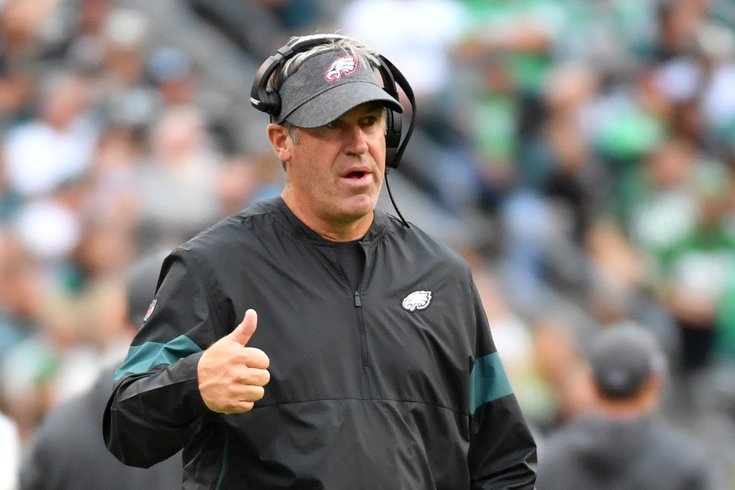 Welp, that didn't take long. It is officially Dallas week here in Philadelphia, and it's already off to a, um, start. A day hadn't even passed since the Eagles' loss in Minnesota, and Doug Pederson has already (maybe unintentionally?) tossed some chum in the water, when he kinda-sorta-maybe guaranteed a victory over the Cowboys on Sunday, while appearing with Angelo Cataldi on 94.1 WIP Monday morning.

"Anytime Dallas losses it helps, because here's the thing—I know the sky is falling outside," Pederson said. "It's falling and I get that and the fans are real. We're going down to Dallas, our guys are gonna be ready to play. And we're gonna win that football game and when we do we're in first place in the NFC East, we control our own destiny, we're right where we need to be. Has it been perfect or beautiful or all of that? No. But all we need to do is try to be 1-0 this week, beat the Dallas Cowboys, we're in first place. Listen, they're reeling too. They're struggling too. They dropped their last three games so this will be an exciting football game."

Of course, when Pederson talked to reporters Monday afternoon, his stance softened a bit.

"I never said 'guarantee,'" Pederson said. "I would never do that.

"I promise you that Jason Garrett is going to say the same thing to his football team. They're going to win the game as well. I'm not going to stand here and go on record and say 'We're going to try to win a game. Or, hopefully we can go win this. It just doesn't show confidence, and I want to show confidence in our players."

So Pederson either guaranteed a win, or he didn't. Personally, I don't think the Eagles or Cowboys need this motivation either way.

This is when you need a guy like LeSean McCoy to call a player on the other team soft and overrated, and leave no doubt.