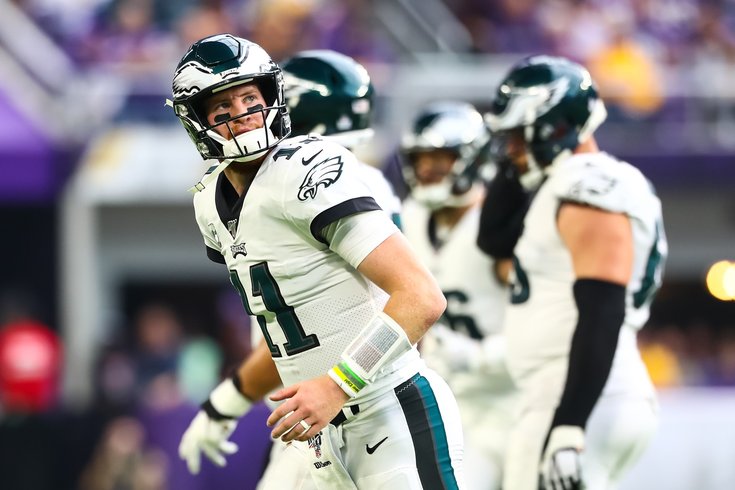 Philadelphia Eagles quarterback Carson Wentz (11) looks on in the second quarter against the Minnesota Vikings at U.S. Bank Stadium.

Unable to dig out of another early hole, the Eagles went down meekly against the Minnesota Vikings, suffering a 38-20 defeat on the road. Philadelphia drops to 3-3, and problems that have popped up all year — poor secondary play, no pass rush, no speed over the top — continue to haunt them.

There is not an easy fix for all that ails them, nor do they have any time to dwell on those problems. Next up is a date with the Dallas Cowboys on the road, a huge midseason game that could either get them back on the right track or leave them behind the eight ball for the foreseeable future.

• With the team in shambles for multiple stretches of the game, it was on Carson Wentz to steady the team and get them pointed in the right direction. Outside of his interception with the game out of reach in the fourth quarter, Wentz did about as much as you could have expected.

The big plays weren't there early, but Wentz kept growing in stature as the game rolled on, and it was the first game this season where it felt to me that he was putting everything together at once. He had a huge gain on the ground on a read-option play in the first half, he hit players (mostly Miles Sanders) down the field for big yards, and as he has shown time and time again, his ability to improvise is up there with anybody in the NFL. His touchdown throw to Alshon Jeffery to open the third quarter was masterful, as Wentz manipulated the play perfectly to hit paydirt.

.@cj_wentz connects with @TheWorldof_AJ for another touchdown and we've cut the lead to 7!#PHIvsMIN | #FlyEaglesFly pic.twitter.com/Sg2rjMIq6w

The passing game has had all sorts of problems, most of them related to personnel and avoidable mistakes. All the while, Wentz keeps coming, and his touch throws have gotten better and better as the season goes on. If not for Jeffery losing his footing on a great Wentz throw down the sideline, the game might have been tied midway through the third quarter, and who knows how things unfold from there.

The bottom line is this — Wentz continues to show how good he can be with even a little help around him. With a little more speed on the field in the form of DeSean Jackson, this offense could really get cooking. He deserved better on Sunday.

• Jake Elliott is really the only other guy who gets a big thumbs up for this game. Good job, buddy.

• With the Eagles finally riding some momentum in the third quarter and on the verge of getting a stop, Andrew Sendejo came in and tried to take Adam Thielen's head off as he was already being brought to the ground. The good news for Thielen, Sendejo, and the Eagles is that he missed because if he had made real contact it would have been a no-doubt penalty. These are the sort of undisciplined plays that have killed this team all year.

• I'm not sure what else we need to see from this Eagles secondary to show they clearly need a talent upgrade if this team wants to compete at the highest levels. Week after week, we cycle through different players who draw the ire of the fanbase for their poor performances. Sidney Jones, Rasul Douglas, Ronald Darby, it doesn't even necessarily matter what the matchup is, the Eagles find a way to get torched.

When you watch different players get burned every week and can credibly say to yourself, "Yeah, it makes sense they would target that guy," it doesn't take a lot of introspection to determine this group isn't good enough. I know the Eagles want to build out from the defensive line first and foremost on defense, but it's not an either/or scenario.

The "talent upgrade" may also end up being on the coaching end, too. While it's possible the Eagles just keep drafting and obtaining players who simply aren't good enough, it seems impossible that they've been this poor at developing cornerbacks in recent history. What they're being coached to do often seems like it doesn't take away any of the potential routes that could be run against them. They're far enough back that they are helpless against a lot of shorter routes, but not far enough back to avoid getting beat over the top, evidently.

It's mind-numbing to watch every week.

• In spite of all that said above about the secondary, it was Philadelphia's run defense that was more disappointing. You expect the Eagles to get killed through the air every week at this point, but they hang around thanks to owning what was previously the best run defense in the league.

Unfortunately, they ran into a Vikings rushing attack that entered the game as one of the league's best, and it wasn't even Dalvin Cook who ended up hurting them. Minnesota got just enough from Alexander Mattison to keep them on their heels, and it made it even more difficult to stop the Vikings all afternoon.

The most frustrating play of the day had to be Minnesota's successful reverse in the third quarter, which looked to be stopped for a huge loss on two separate occasions. But two different Eagles, including Malcolm Jenkins, inexplicably bit on pump fakes from Vikings wideout Stefon Diggs, and he was eventually able to turn that play into a nice Minnesota game. That was the day in a nutshell.

This defensive front simply isn't getting it done. Kirk Cousins was barely touched all day, and no matter what you think of him as a big-game quarterback, he will absolutely kill you like any other semi-competent quarterback if there's never any threat of being hit.

• Piggybacking off of the last two points, we need to discuss why the Eagles are in a situation where they're as talent-strapped as they are right now. Howie Roseman has many strengths, but his draft record is obviously spotty, and you can only have so many classes with major misses before it comes back to bite you on the field.

The Eagles rarely get big contributions from young players, and that is the lifeblood of teams who have reached the point where they have to pay big money to their franchise quarterback. New England has been the NFL's greatest modern dynasty because of their coach/QB combo, but also because they have shown an unmatched ability to reload and retool around that pairing.

Even if they upgrade with a major move in season, they have a lot of work to do to build their talent pipeline. One thing that jumps out every week is how goddamn slow this team is on both sides of the ball, and as the old saying goes, you can't teach that.

• Doug Pederson deserves credit for the team's ability to problem solve on the fly and rebound after tough starts. But they shouldn't have to keep digging themselves out of holes of their own creation, and when the team is so poorly prepared to start the game almost every week, that falls on the coaching staff.

I'm not trying to be funny here, but maybe the Eagles should think about cutting down on the scripted plays to start the game. When the Eagles are free-flowing, playing with tempo, and making decisions on the fly, everything seems to go a lot smoother.

• It seems less than ideal for the Eagles that Nelson Agholor is the only guy with any speed to threaten teams over the top, and yet he may be their worst wideout at tracking deep balls. Every time Wentz goes to him deep, it looks like he has absolutely no sense of where it's at or what he should do.

• I didn't have the proper time to process Philadelphia's fake field goal before halftime, and the more I've thought about, the more confident I am saying it's one of the more baffling calls of Doug Pederson's tenure.

Nothing about the play makes sense. You were far enough back that Jake Elliott had no reasonable chance to throw that for a touchdown. They only had one option to throw to, and it was on an out route to the sideline. If you convert for a first down, you might end up letting the clock run out anyway, and if it doesn't, odds are that you went through all of this just to attempt a shorter field goal. Nothing about this play makes sense.

If you think you need to go for it on fourth down, okay, you can sell me on that. Down two scores on the road, I don't mind being aggressive even though you're getting the ball at halftime. But if you want to go for it, put it in the hands of your franchise quarterback and let him try to make a play. Wentz was one of the few guys showing any competence in the first half, but Pederson was caught between two worlds and the result was a disaster.

Did any of this end up mattering? Of course not. But I care about the process as much as the result, and neither were good here.

• There was absolutely no rhyme or reason to the pass interference calls that were or were not made on Sunday. The flag thrown for PI by Sidney Jones early in the third quarter was an absolute abomination, particularly with how lenient they had been on pass interference most of the afternoon up until that point. The Eagles were fortunate it didn't end up spiraling out of control after that penalty, and it's amazing the officials in the NFL seem to get worse and worse every year.