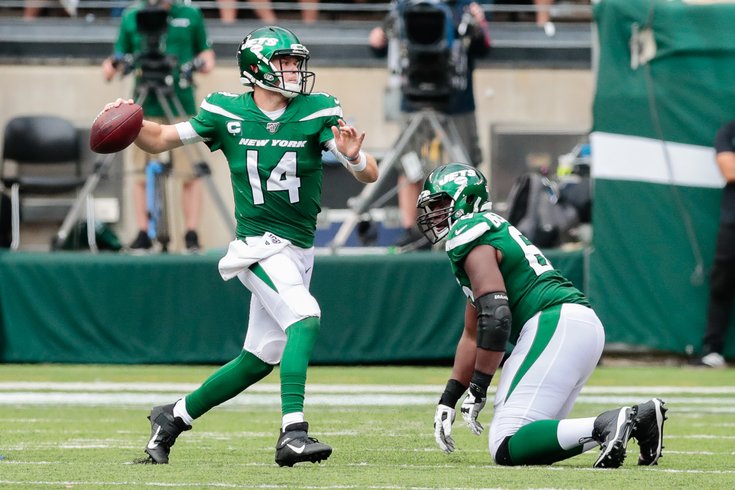 The Eagles will be rooting for Sammy Spleens today.

In past seasons, Philadelphia Eagles fans generally rooted for their own team, and kept an eye on the rest of the NFC East. Ever since they won their first Super Bowl, and now that they are thought of as contenders to represent the NFC in the Super Bowl, it's perhaps worth keeping tabs on the conference, as opposed to just the division.

And so, each week we'll lay out a rooting guide for non-Eagles games on the NFL schedule, and yes, I'm aware that most of the below is obvious. Ideal winning team bolded:

• Cowboys at Jets: This line is somehow only 7. Sam Darnold is back, and the Cowboys could be without both of their starting offensive tackles, so those two things are obviously part of it. But still, the team is very, very bad. Only 7? Vegas thinks the Jets have a fighting chance.

• 49ers at Rams: This is a very interesting game, in terms of who to root for if you're a fan of another team in the NFC. On the one hand, a 49ers win could signal that they are indeed for real, and adding a legitimate contender to the mix is not ideal. On the other hand, the Rams are the reigning NFC champs, so maybe it's best not to overthink it, and just be glad that they are getting stuffed deep down into the standings? I lean toward the latter.

• Lions at Packers: Yes, the Eagles beat the Packers and lost to the Lions, but who would you rather see in the playoffs?

• Panthers at Buccaneers: On the one hand, a Carolina loss would make them even with the Bucs at 3-3. On the other hand, if the Panthers keep piling up wins and somehow make it into the playoffs, they could be an easy opponent, relatively speaking.

• Saints at Jaguars: Obviously, an AFC team beating a 4-1 NFC team is the better outcome.

• Seahawks at Browns: Again, obviously, an AFC team beating a 4-1 NFC team is the better outcome.

• Washington at Dolphins: HUGE game here in terms of 2020 NFL Draft positioning. It's better if Washington wins, and stays clear of the No. 1 overall pick.

• Falcons at Cardinals: The loser of this game is dead. I guess it's just preference of which team you'd prefer be gone. I personally think it's best if the Falcons' season spins out of control. They're in a weird spot in which even if they get into position to take a quarterback highly in the draft, they probably won't, even with Matt Ryan turning 35 next May.

Only interesting to the Eagles in that some of these teams (in italics) could be sellers at the trade deadline: