What they're saying about the Eagles: Thank god for the NFL offseason 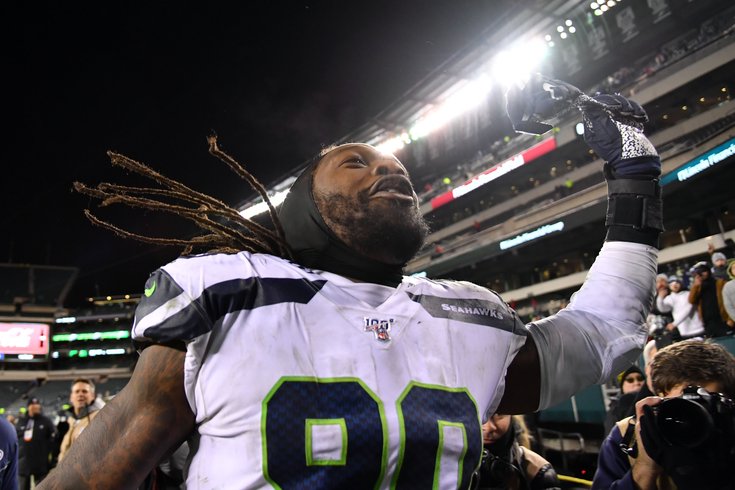 Could Jadeveon Clowney be an option for the Eagles?

The NFL appears to be continuing on as planned which is good news for sports media members like myself, desperate to cover sports and not cancellations.

With Monday slated to begin the "legal tampering" period, and Wednesday the official start of the league year, when free agents can sign contracts with new teams, there could be a busy week ahead for the Eagles, who stand to lose up to 19 players to free agency while signing a good number of new ones.

Here's a look at what news outlets are saying about the Eagles just days from what could be a very eventful week:

First, at The Athletic, their staff writers looked around the NFC East at each team's free agents, needs and strategy heading into next week. Beat writer Zach Berman predicts the Eagles could have eight new starters next season, if not more. Here's more on what he had to say about the Eagles potential plans:

State of the roster: The Eagles are not in rebuilding mode, but they’re expected to reshape their roster more than in any offseason since 2017, when they built a Super Bowl champion. Look for them to focus on getting younger and faster. They have difficult internal decisions to make, such as determining what to do about Alshon Jeffery (there’s a $26 million cap hit if they cut him) and Malcolm Jenkins (he wants a new contract and said he won’t play on his existing deal). The Eagles have 19 players with expiring contracts, none of whom should be considered players they must re-sign. They must upgrade at wide receiver and cornerback. They have holes to fill at linebacker and must figure out what to do at safety. They can improve their pass rush and are unsettled at No. 2 quarterback. The Eagles are letting Peters hit the open market after 11 years with the team and are expected to turn to 2019 first-round pick Andre Dillard. Look for Vaitai to be a coveted free agent elsewhere; he was a key reserve for the Eagles for four years and should find a starting job. Darby and Jalen Mills, their top two cornerbacks for the past three seasons, are set to hit free agency. It’s unlikely both are back. It’s likely that the Eagles have at least eight new starters next season. [The Athletic]

Reuben Frank at NBC Sports Philly went a step further in one of his latest pieces, surmising where each of the team's unrestricted free agents will wind up. The vast majority (like Nelson Agholor, to the Ravens and Jordan Howard, to the Bills) he foresees playing in new cities next season. There are just two players he believes the Eagles will retain:

Josh McCown: My gut instinct is that he comes back to the Eagles as a No. 3 behind Carson Wentz and a Joe Flacco or Case Keenum type on a one-year minimum-deal: RANDOM GUESS: Eagles, 1 year, $1.05 million.

Rodney McLeod: He’s not the best safety on the market, and he does turn 30 this summer, but McLeod is a quietly consistent safety who should do pretty well in free agency. I actually think he re-signs with the Eagles. RANDOM GUESS: Eagles, 3 years, $15.5 million [NBCSP]

Geoffrey Knox | Inside the Iggles

Lets now move away from who they might lose, and take a look at who they might (or might not) gain. At Inside the Iggles, Geoffrey Knox made a list of 10 more prominent free agents the Eagles could theoretically have interest in that they SHOULD NOT sign. One of the first ones of interest is a name many were asking about in Jimmy Kempski's Eagles chat on Friday:

It just feels like Jadeveon Clowney is one of those guys that could be one of the legends if he just worked harder. He’s like the NFL’s version of Rasheed Wallace. He’s put together physically. He has every gift needed to be successful at the professional level, but for whatever reason, he seems to be fine with doing enough to get by.

Clowney is a better run defender than a pass rusher, but none of that matters if he never develops a motor or if he can’t stay healthy. He just seems lazy, and anyone who gives him a long-term deal is in danger of having buyer’s remorse from time to time once he’s in the fold. Often, that team isn’t going to get what they paid for. [insidetheiggles.com]

Jonesing for a fix

The name most Eagles fans have heard or read about as free agency approaches is Byron Jones, the soon-to-be free agent cornerback from the rival Cowboys. The defensive back both makes complete sense for the team, while also making no sense at all (due to his likely high salary demands). Does Les Bowen think the team should back up the Brinks truck for Jones?

Is Jones, who turns 28 in September, worth the $17 million or so a year he is expected to command in free agency? Probably not. That’s the thing with top-echelon free agents, you don’t get bargains. But that doesn’t mean the Eagles shouldn’t sign him.

Jones shuttled back and forth between safety and corner in college and with the Cowboys. He has not been a good NFL safety. He has been a pretty solid NFL corner, especially in his Pro Bowl season of 2018, after Kris Richard joined the Dallas coaching staff. Jones isn’t a great ballhawk, with two career interceptions, but he is very adept at zone coverage, which the Eagles use a lot. And he has been healthy, playing 79 of a possible 80 games. Jones might be kind of a less star-crossed Ronald Darby, another corner drafted in 2015 (in the second round, by Buffalo).

The Eagles have a huge need at wideout and needs also on the defensive line and in the linebacking corps. If they sign Jones, they won’t be getting Stephon Gilmore, but they will be getting a good player who makes it possible for them to avoid devoting a high pick to the corner spot. There might be other corners available in free agency they could plug in and play, but Jones seems like more of a sure thing than any of those. [Philadelphia Inquirer]

And finally, inevitably, we have to look at the XFL, which suspended its inaugural season with the promise of paying its athletes in full for the year. The players who entertained us over these last few weeks to fill the football void in our lives are now all, technically, free agents for NFL teams to kick the tires on. The Eagles currently have just one quarterback under contract for 2020 in Carson Wentz, with both Nate Sudfeld and McCown looking at free agency. Would the Eagles think outside the box and bring in one of the XFL's biggest stars (who happens to be a hometown here)?

The guy throwing it to [wide receiver] Phillips was the former 5-11 Temple star and Walker, 25, was on track to be named the XFL's MVP when things were shut down. A dual-threat who fits into the modern NFL as signal caller who can extend plays and beat you with his arm or legs, the knock on Walker has been his size but that sentiment is changing.

With the Eagles backup QB situation in flux (both Josh McCown and Nate Sudfeld are free agents) and the projected new NFL CBA set to further limit practice sessions from the offseason through training camp and into the regular season, getting QBs who can excel off-schedule will become even more important. Walker is that type of player.  [SI.com]