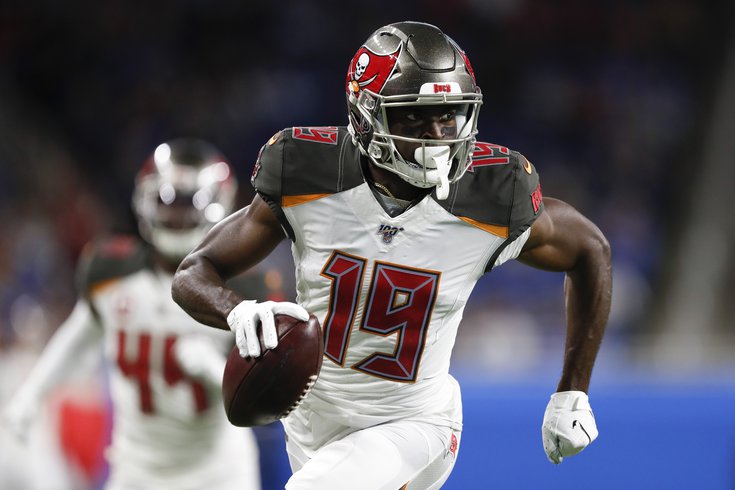 NFL free agency is just six days away (four if you consider the two-day "legal tampering period" the unofficial start of free agency, as I do), you know, assuming a global pandemic doesn't postpone those events, as scheduled.

And so, let's take a look at the Philadelphia Eagles' top 10 free agents (sort of as I see it, sort of as I think the team might see it).

We've written quite a bit about Jones already. We included him as part of the Eagles' offseason plans over their next calendar year. Then we profiled him a little deeper as a free agent target in January. Then we showed the drastic difference in his production vs. the Eagles' current corners. And we've covered him extensively in chats/mailbags/etc.

The Eagles' struggles against big plays in the passing game were often crippling in 2019, as shown in this Twitter thread:

They have to fix that immediately, and in my view, they almost have no choice but to go hard after Jones, who in my view, is clearly the best available free agent cornerback on the market.

He would help the Eagles' often woeful secondary considerably.

There's the cost, obviously, which could get a little out of control, as some are predicting that Jones will get upwards of $18 million per season. So be it. That's the penance for whiffing on Sidney Jones and Rasul Douglas in the draft (and to a lesser degree, Ronald Darby in a trade).

As noted previously, back in 2016, per Brandon Lee Gowton's "Eagles' interest tracker," the Eagles showed a ton of interest in Kwiatkoski. They had him in for one of their 30 allotted pre-draft visits, they held a private workout with him, and they were in attendance at his pro day. That's a whole lot of attention for a Day 3 prospect.

In 2019, under new defensive coordinator Chuck Pagano, Kwiatkoski only appeared in 2 of the first 8 games in the regular defense, playing just 45 snaps. After Danny Travathan got hurt, Kwiatkoski became a regular, starting 7 of the Bears' last 8 games. In those 8 games, he had 58 tackles (6 for loss), 2 sacks, and an INT, while continuing to play special teams.

If the Eagles believe that Kwiatkoski showed enough as a starter in the back half of 2019, then they could view him as an economic alternative to some of the more costly options at linebacker in free agency. As we should all know by now, it is vary rare for the Eagles to invest premium resources into the linebacker position, though obviously, they'll need to find a starter after moving on from Nigel Bradham.

Has anyone noted that the Eagles need more speed at the wide receiver position? Well, at his pro day in 2015, Perriman ran a blistering 4.24. So that's pretty fast, right?

Interestingly, Perriman had Mack Hollins-like numbers during the first 9 games of the season, but he exploded during the last 5, with most of his damage done after Mike Evans went down.

Perriman is still only 26 years old, and can grow with Carson Wentz. Additionally, his presence (along with DeSean Jackson's) would allow the Eagles to take the best wide receivers available in a loaded 2020 NFL Draft, rather than having to focus on adding a speed guy.

Littleton went undrafted in 2016. He initially contributed on special teams for the Rams, and worked his way up to become an impact starter. His last two seasons, in which he has started all 16 games:

His 259 tackles rank sixth among linebackers:

And oh by the way, he also has five blocked punts.

As noted above, the Eagles don't prioritize the linebacker position, but this is a player who fits in so many ways and can make a big impact. He will be expensive.

First, we should note that the Eagles have had previous interest in Anderson:

Mort just said on ESPN that the Eagles targeted the Jets’ Robby Anderson before they went after Golden Tate. Anderson makes sense — He would have fit the field-stretching speed receiver they lack.

Anderson is big play threat with 4.34 speed who has consistently averaged around 15 yards per catch over his four-year career with the Jets.

Those are pretty good numbers, when you consider the Jets' instability at quarterback over that time frame. Since 2016, only seven receivers have 200+ catches and 14.5 or more yards per catch. They are Julio Jones, Mike Evans, T.Y. Hilton, Tyreek Hill, Brandin Cooks, Marvin Jones, and Anderson. What might Anderson's numbers have been with a stable quarterback situation?

Of course, Anderson will be expensive. The best comparison for on-field production is Sammy Watkins, who signed as a free agent with the Chiefs in 2018 for three years, $48 million, or $16 million per season. Here were Watkins' career numbers at the time vs. Anderson's last four years:

Of course, Watkins had the cache of being the fourth overall pick in the 2014, while Anderson went undrafted in 2016. Still, the bet here is that Anderson's deal on the open market in a weak wide receiver free agent group won't be that far off from Watkins'.

Like Perriman above, the acquisition of Anderson would allow the Eagles to not have to feel like they must find a speed receiver in the draft, though the feeling here is that the Eagles are more likely to spend mega-dollars at corner than they are at receiver.

For some, that immediately makes him untouchable, which I understand fully. However. if you're a gambling type, if Ward can stay healthy, he's an excellent fit.

While it was easy to see how bad the corners were all season long in the video above in the Byron Jones section, the exercise of putting video of all of those plays in one place really shined a light on the number of times that Rodney McLeod was at least partly culpable.

That has to change in 2020, especially if Jim Schwartz wants to continue to play a large number of single-high looks.

Ward is only 5'11, which isn't a selling point, of course, but a lack of height does not seem to bother Schwartz, seeing as McLeod (5'10) was a high-priced Eagles acquisition four years ago. His height also doesn't affect his style of play, as Ward will lay the wood when given the opportunity. He also has NFL cornerback experience in his background, which is almost a Schwartz prerequisite.

Waynes is probably only an option if the Eagles fail to land Byron Jones. I believe that by the time that such a miss were to occur, it would be too late to pivot to the No. 2 cornerback, James Bradberry, who could be other teams' No. 1 CB priority.

Waynes has not become the star corner the Vikings hoped he would be, however, he is still a competent starting cornerback, and arguably the Vikings' best corner in 2019, with Xavier Rhodes' play falling off dramatically. He went 11th overall because he ran a 4.31 40 at the 2015 NFL Combine.

Obviously, he would instantaneously become the Eagles' fastest corner, if they were to bring him in, taking that title away from Ronald Darby, who the Eagles are likely to move on from this offseason. Unlike Darby, however, Waynes can/will tackle.

Over five seasons, Waynes' "meh" numbers include 247 tackles, 7 career INTs, and 2 forced fumbles. However, he has been durable (6 career games missed), and he can actually run with the league's faster receivers, which is more than what can be said for the Eagles' current corners.

Robinson was suspended four times during his college career at Florida, but he has seemingly kept out of trouble in his first four years in the NFL. Back in 2016, the Eagles brought in Robinson for a pre-draft visit, but the Chiefs snagged him in the fourth round of that draft. Of course, the Eagles had a limited number of early picks in that draft, as a result of trading up to grab Carson Wentz.

Playing in an offense with Travis Kelce, Tyreek Hill, Sammy Watkins, and Mecole Hardman, Robinson has not had many starting opportunities, but he still managed to carve out a role as yet another playmaker for Patrick Mahomes. While Robinson only ran a 4.59 at the 2016 Combine, he was thought of as a prospect with good speed.

The Eagles reportedly have interest in Robinson, according to Jeff McLane of The Inquirer, but he shouldn't be viewed as anything more than a depth piece.

After Davis was lost for the season with a torn labrum after playing just one game in 2019, the Steelers traded their 2020 first round pick for Minkah Fitzpatrick, almost assuredly ending Davis' tenure in Pittsburgh. In 2020, the Steelers' starting safeties will be Fitzpatrick and 2018 first-round pick Terrell Edmunds.

In three years in the NFL, Davis has played in 48 games, starting 41. His numbers:

As you can see, in his three healthy seasons, he had a decent number of tackles, and INTs/PBUs.

Davis was a second-round pick of the the Steelers' in 2016, and he has very good athletic measurables. He also brings cornerback experience in his background, which, again, Schwartz. He played outside cornerback in college at Maryland, though he was probably miscast there.

In a pretty good free agent safety class and coming off a season cut short due to injury, Davis shouldn't command big-time money, and would be a younger upgrade over Rodney McLeod.

Timmy Jernigan-style. (Though to be clear, I think this would be very disappointing.)