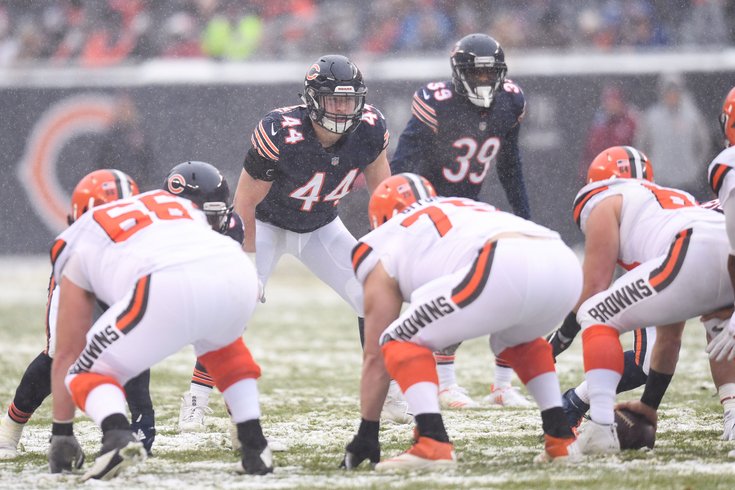 As we laid out in our "stay or go" series, the Philadelphia Eagles are heading into an offseason where they could see some prominent players move on from the team.

One thing that has very clearly been missing in the Eagles' offense the last two seasons has been speed (duh), and Perriman has plenty of that. At his pro day in 2015, Perriman ran a blistering 4.24. His spider chart:

Because of his speed, Perriman was drafted in the first round by the Baltimore Ravens. In his rookie season, Perriman did not appear in any games, and was placed on injured reserve mid-way through the season. Over the next two seasons, Perriman caught just 43 passes for 573 yards and 3 TDs.

The Ravens released him prior to the 2018 season, and he was scooped up by the Cleveland Browns, where he finally began to show some life as an NFL receiver. In 10 games (2 starts) with the Browns, Perriman had 16 catches for 340 yards (21.3 YPC) and 2 TDs.

He agreed to terms on a new deal with the Browns during the 2019 offseason, but then he and the Browns agreed to back out of that deal after the team traded for Odell Beckham Jr. He signed with the Buccaneers, and improved on his 2018 numbers in 2019, when he caught 36 passes for 635 yards (17.9 YPC), and 6 TDs in 14 games.

Interestingly, Perriman had Mack Hollins-like numbers during the first 9 games of the season, but he exploded during the last 5, with most of his damage done after Mike Evans went down.

Here he is cooking the Lions' secondary late in the season:

The ability is there, and the Eagles obviously need a deep threat. Perriman is still only 26 years old, and can grow with Carson Wentz, as opposed to a one-year old guy rental. It's also worth noting that he would likely start in Philadelphia, whereas he'll be no higher than the No. 3 receiver in Tampa, behind Mike Evans and Chris Godwin.

With the Cowboys seemingly having higher priorities in retaining scheduled free agents quarterback Dak Prescott and wide receiver Amari Cooper, Jones is likely going to be able to test the open market in free agency, and if he does, as is expected, he'll be the top cornerback available. As such, he's going to be very expensive. We'll get to that in a minute, but first, what is Jones as a player?

Jones is probably best known for having the longest recorded broad jump in history. To be clear, that's not just in the NFL. That's ever, as in, in the history of the planet Earth. Here it was, back in the 2015 NFL Combine:

Yes, he is explosive. Below is his spider chart. As you can see, the man has good size, and he is one of the most athletic players in the NFL.

He's also versatile. Jones played his rookie season at corner, both on the outside, and in the slot. In his second year, he unwisely got moved to safety, where his talents were not maximized, in my view. He remained at safety for two years, mostly playing more of a free safety role in 2016, and adding more box responsibilities in 2017.

In 2018, his fourth year in the NFL, Jones moved back to corner, and he has played there the last two seasons. The experience of having played every position in the secondary should be viewed as a positive, as he'll have a good understanding of what everyone on the back end should be doing, even in a new scheme. He made his first Pro Bowl in his first year back at corner in 2018, as well as earning a second-team All-Pro nod.

As a corner, Jones has the speed and agility to match up with fast receivers, and at 6'1, the size to cover bigger guys like Mike Evans. He is a complete, solid, durable corner, but he has not made many splash plays. His career numbers:

As you can see, in five seasons, Jones has just 2 career INTs, and 3 forced fumbles. He has no interceptions in the three seasons he played cornerback. It's hard to only have 2 picks in 79 games. Over that significant length of time, there's bound to be some freebies along the way.

So what will Jones cost?

Jones has a chance to beat the $15 million that Washington flushed down the toilet on Josh Norman. Of course, the Eagles have swung hard and missed in free agency themselves on corners in the past. They signed Byron Maxwell to a six-year deal in 2015 for $63 million. That one was on Chip Kelly, though Howie Roseman was responsible for Nnamdi Asomugha's 5-year deal worth $60 million in 2011.

Ultimately, the Eagles almost have to spend on a corner in free agency. To be determined if a bidding war for Jones gets too out of control. There are certainly other options, like Chris Harris, Trae Waynes, Jimmy Smith, Logan Ryan, Bradley Roby, Eli Apple, and others.

Back in 2016, per Brandon Lee Gowton's "Eagles' interest tracker," the Eagles had Kwiatkoski in for one of their 30 allotted pre-draft visits, they held a private workout with him, and they were in attendance at his pro day. That's a whole lot of attention for a Day 3 prospect.

The year 2016 is particularly relevant for pre-draft interest because it was the year that Roseman came back into power, pre-Joe Douglas. In other words, Howie himself seemed to like Kwiatkoski, who has blossomed into a nice role player for the Bears over the last four years.

In 2019, under new defensive coordinator Chuck Pagano, Kwiatkoski only appeared in 2 of the first 8 games in the regular defense, playing just 45 snaps. After Danny Travathan got hurt, Kwiatkoski became a regular, starting 7 of the Bears' last 8 games. In those 8 games, he had 58 tackles (6 for loss), 2 sacks, and an INT, while continuing to play special teams.

• 2019: They signed L.J. Fort, and didn't know what they had in him, releasing him after just 4 games. Fort went on to have a good season for the Ravens.

• 2016: They signed Nigel Bradham to a two-year contract. At the time, the Eagles still had Jordan Hicks and Mychal Kendricks, so Bradham was viewed at the time as more of a role player than he is now.

Kwiatkoski is an aggressive, high-motor linebacker, who tackles well, blitzes, and is OK-ish in coverage, but just has average athleticism.

He would make sense as this year's role-playing-first-day-of-free-agency linebacker / core special teamer.