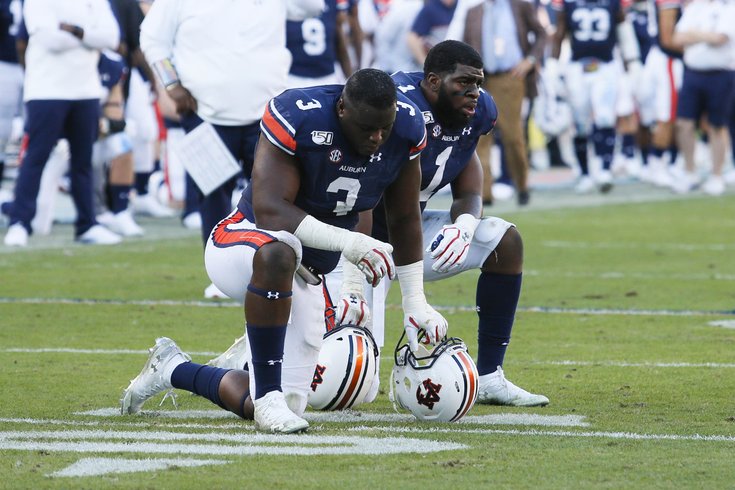 The Senior Bowl game kicks off today at 2:30 p.m. EST, and if you find yourself watching that, here are some players who could make sense for the Philadelphia Eagles in the 2020 NFL Draft that we missed during the regular college football season.

The quarterbacks the Eagles have had in camp or on their roster the last couple of years:

The Eagles clearly have "a type" that they like at quarterback, and Montez fits it at 6'4, 240, with a strong arm:

If the Eagles bring back Nate Sudfeld and also think of him as their No. 2 quarterback heading into 2020, then it would make sense for them to draft a late round developmental guy, like Montez, and try to correct some of his accuracy and pocket concerns.

I hadn't done much homework on Jefferson during the season, but he was highly impressive as a route runner down in Mobile this week. Here's a sampling. The second route in this video is awesome:

Van Jefferson’s route pacing is on a different level. When he’s facing off-coverage, he’s delaying his stem in order to accelerate before the break - gets the CB ready to open up and run while assuring Jefferson isn’t on top of the CB before his snapdown. pic.twitter.com/DbZoSYlivd

And hey, his dad, as it turns out, is Shawn Jefferson, who played for 13 years in the NFL, and has been a wide receivers coach in the bigs for 12 years. Sooooo, I guess it makes sense that his kid can run routes.

In the Eagles' offense, while I don't think Jefferson is a guy who is going to make a lot of big, explosive plays, he can be a solid No. 2 who Carson Wentz can rely on to get open for first downs. Should the Eagles draft a burner early, Jefferson would make sense on Day 3 if they double-dip.

In that sense, it's easy to see his fit with the Eagles as a potential swing tackle replacement for Halapoulivaati Vaitai. Here he is against UCF this past season. He's the RT, No. 65:

At 6'6, with 35 1/8" arms, he has excellent length for the NFL, and athleticism to go along with it. I think some team will view him as a starter, which means he could go Day 2. If he lasts into Day 3, the Eagles could have interest.

I struggled with profiling Davidson during the season, because I wasn't sure what he would be in the NFL. Now that he is up to 297 pounds, his fit at the next level, at least in terms of the Eagles' scheme, is now obvious. He could be a disruptive, gap-penetrating defensive tackle, with some versatility to play on the edge at times as well.

In 2019, Davidson had 48 tackles (11.5 for loss), and 6.5 sacks. NFL Network's Daniel Jeremiah had him being picked at 29th overall in his initial first round mock draft, and 30th overall on his initial top 50 prospects. On the first day of Senior Bowl practices, Davidson was arguably the best player on the field, though his week was cut short by an injury, and he was in a walking boot on Day 2.

After watching their defensive tackles drop like flies the last two years, the Eagles badly need some young reinforcements at the position, especially with Fletcher Cox turning 30 during the season next year and Malik Jackson both recovering from a serious injury and having just turned 30 in January.

The 2020 defensive tackle class appears to be a very good one, and there's a decent chance that one could slide to the Eagles' pick in Round 2. If that's Davidson, he would be a steal there.

The downside is that Holmes is only 5'10, and thus, not an awesome candidate to play on the outside in the NFL. In that sense, he really only makes sense for the Eagles if they move Avonte Maddox to safety full time, which is certainly a possibility.

The upside is that he has good athleticism, he's sticky in coverage, he competes like hell for the ball in the air, and (Jim Schwartz alert) he plays with swagger. I mean, look at the video preview photo below. He's wagging his finger! Lol.

Holmes also brings special teams ability to the table, both as a returner and on kick/punt coverage.