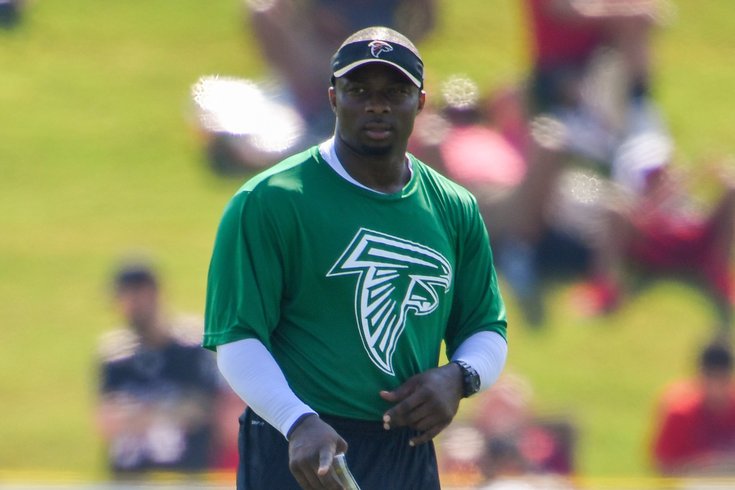 The Philadelphia Eagles could be getting closer to filling two of their assistant coaching vacancies: defensive backs coach and defensive line coach. At least that's the word coming down this Friday as the Senior Bowl wraps up and Pro Bowl weekend gets underway in Orlando.

According to ESPN's Jeremy Fowler, the Eagles have not only interviewed but are also close to naming Marquand Manuel as their new DBs coach to replace Cory Undlin, who was named the defensive coordinator in Detroit earlier this month.

Eagles have interviewed former Falcons defensive coordinator Marquand Manuel for defensive backs coach and a deal could happen as early as today, per source. Manuel was a key member of Atlanta’s defense during Super Bowl run, can help a Philly secondary that needs it.

Of course, this comes a few days after it seemed like DeWayne Walker was the frontrunner for the job, but Fowler adding that the deal could be done today adds a bit of certainty to his report that we haven't seen elsewhere before.

Manuel would bring seven years of coaching experience to Philadelphia to go along with eight seasons of experience playing safety in the NFL. And that coaching background comes with some serious postseason experience as well. Manuel was first hired by the Seahawks in 2012 as an assistant special teams coach before being promoted to a defensive assistant prior to the Seahawks Super Bowl winning season in 2013. A year later, when the Seahawks lost to the Patriots in the Super Bowl, Manuel served as assistant secondary coach.

We'll likely learn more about Manuel in the coming days. If nothing else, he would be an experienced addition to Jim Schwartz' defensive staff.

But that's not the only defensive hire being rumored for the Eagles. So let's dive into this Friday edition of What They Saying, which starts with — you guessed it — more coaching news and rumors...

Adam Caplan | Inside the Birds Podcast

Adam Caplan and Geoff Mosher host the Inside the Birds podcast for 97.3 ESPN in South Jersey, and the former broke a little news on their most recent episode. According to Caplan, the Eagles will be promoting Matt Burke, the former Dolphins assistant who spent last season as a defensive assistant for the Eagles, to defensive line coach. (It's also worth noting that Howie Roseman gave him a particular shoutout in he and Pederson's end-of-season press conference.

Barring a major surprise it’s going to be Matt Burke as the d-line coach, and this is really interesting – it’s going to be Jeremiah Washburn as his assistant. Jeremiah, I checked into this, because it seems like everyone knows this stuff, coaches all around the NFL know this already. So I asked coaches who are here (at the Senior Bowl), ‘hey what can you tell me about this guy?’ I know he’s Jim (Washburn’s) son, but I don’t know anything about him. Super duper smart, and obviously he knows the wide 9 because Burke is a protege of Jim Schwartz, so he knows the wide 9. Burke, I don’t know that he’s ever coached d-line, but he’s a strategist, incredibly strategic, that’s why he’s getting this job because he matches what Jim wants.  [h/t crossingbroad.com]

Speaking of the Eagles assistant coaches and internal hires, the biggest job opening the team has right now is the vacant offensive coordinator position. After missing out on a few candidates, could the Eagles look to make an internal hire, while also making a strategic outside hire to fill that soon-to-be vacated position?

Over at BGN, Matt Harkenreader, who previously wrote that the Eagles should've gotten rid of QB coach Press Taylor when they fired OC Mike Groh and WR coach Carson Walch, seems to have come around a bit on Taylor. He paints a scenario in which promoting Taylor, given the control Pederson would maintain over the offense, may actually make more sense for the Eagles if they bring in a guy like Jim Caldwell to work directly with Carson Wentz as the new QB coach.

We know from Brandon’s post earlier this week that under Doug, the offensive coordinator is Doug’s right-hand man in game planning, scripts the offense’s first 15 plays, and acts as something of a “switchboard operator” on gameday, taking in critical information from the other assistant coaches and relaying it back to Doug on the sideline. If Press is as sharp and meticulous as reports indicate, and if his only real problem at QB coach was his age, then there is reason to believe he could be successful in this role (especially if he brings back his “vault” to introduce new plays and concepts).

If Press is truly an up-and-comer, making him OC and Caldwell QB coach makes sense

Caldwell, meanwhile, would work directly with Carson as the “wise elder” that he needs to stay on his game. Putting him at quarterbacks coach would also give Wentz more exposure to him than if Caldwell were the offensive coordinator. And considering how Doug likes to get everyone involved in game planning, Caldwell would still have a voice for his ideas there, the same way John DeFilippo did in 2016 and 2017 (and presumably Press Taylor since then). If you buy in even a little bit that Press is an up-and-comer in this league who just needs to be put in the right position to succeed, this coaching hierarchy actually makes a lot of sense.  [bleedinggreennation.com]

Brandon Brooks' season may have come to an abrupt end (again) but the Eagles right guard was given a pretty prestigious award by Pro Football Focus, who named Brooks the best offensive lineman in football.

Brooks has been a perennially underrated player throughout his NFL career, whether it was playing in Houston or Philadelphia. Aside from a rookie season in which he played just 173 snaps, he has earned overall PFF grades of at least 74.0 every season since. Four of those six seasons before this one saw him top 80.0 overall, but this year he took his game to another level, earning an overall grade of 92.9. For years we have been making the case that he deserves Pro Bowl, and then All-Pro, recognition, and now he deserves to be acknowledged as the best offensive lineman in the game.

What makes it even more remarkable is that Brooks suffered a torn Achilles at the tail end of the 2018 season. So, a year in which you would have forgiven him for performing some way short of his best play actually saw him push his game to completely new heights.  [pff.com]

They also named the Eagles entire offensive line as the best collective unit in the NFL this past season.

Tell us how you really feel

Speaking of Eagles offensive linemen, Lane Johnson is down at the Pro Bowl in Orlando after being named as an alternate. And he was not shy about the fact that his initial snub bugged him, to say the least.

“I’m not going to lie. I was pretty pissed when I wasn’t here,” Johnson said Wednesday after the NFC’s practice.

He wasn’t going to be modest about his season, either.

“I think it was probably my best season to date — even better than a few years ago,” Johnson said, making the comparison to 2017, when he earned a spot during the earlier voting stages. “I played stronger. I was the best version of myself this year. The longer you play and your body is half-ass healthy … the game becomes easier.”  [theathletic.com]

Former Eagles coach Andy Reid is heading back to the Super Bowl with the Chiefs, and Big Red was on WIP on Thursday with Jon Marks and (Reid's former player) Ike Reese. Here's a sampling of what read had to say, but you can check out the full interview, here.

On playing in the Super Bowl:

"You think you are going to play a game, but it's bigger than that. You gotta make sure everybody is on the same page and you come out of the tunnel at the right time. You get to that spot at the right time. It's a lot about the show, when the players and coaches are ready to play this game. That's what you're doing, but you have to be able to manage that a little bit. But you learn those things by experiencing them."  [94WIP.com]

On watching the Eagles win the Super Bowl:

"I was so proud of Doug (Pederson) and the job that he did and then the organization and Jeffrey (Lurie) and Howie (Roseman), and all of the hard work that went into that year for them. And then the players, some of those guys were my guys when I was there. Just for them to have that opportunity. And then how about the city? The city, they're so passionate about football in Philadelphia. The city got to enjoy that, that parade with the players embracing everybody, it was really a nice thing."  [94WIP.com]

"You know him, you know how organized he is. He is brilliant offensively and he's a good person. He's gonna handle things the right way. There's some unique things that you deal with the Eagles and in Philadelphia itself, and the passion of the people, and you gotta be wired the right way for that. I think, and I still believe this, Doug is the right guy for that job and to handle all of those things. You can see by how his team played this year, with the injuries they had, how they competed and having an opportunity to get themselves into the playoffs. It's a real tribute to him and the way his staff and the organization supported him."  [94WIP.com]