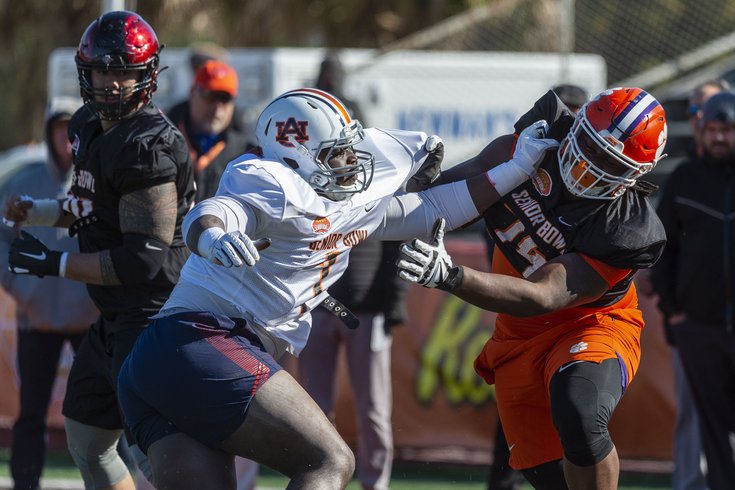 Auburn DT Marlon Davidson dominated on the first day of practice at the Senior Bowl.

The Senior Bowl is here once again and, as always, it kicked off in the morning of Day 1 with the weigh-in, which, as we mentioned in our press box food spread update, is the most disturbing event of the calendar year, in which 100-plus prospects get measured on a stage in front of a few hundred scouts, front office personnel, and media, who critique their bodies.

Back in the day, the Senior Bowl used to really shame the players who agreed to compete and then changed their mind. Nowadays they are a little more discrete about those players, noting that some of them are missing due to injury. Here are the players that got specific mentions at the start of the weigh-in.

Accepted invites, backed out, “mostly due to injury”

We profiled a slew of these players during the season, so I was hoping to get a chance to watch some of them in person, but it's not to be. Of particular interest to me among the players above were Moss, Edwards, Hunt, Lemieux, Kareem, Dye, Gladney, and Arnette. Bummer.

Burrow made the obvious decision to decline, and I don't fault Brown, a potential top 10 pick, for skipping as well. I'm not sure Diggs has carved out a spot in the first round where he should be skipping this event. He could be wasting an opportunity to solidify a first-round spot.

Attended, but were flagged for injury, and will not compete:

I really wanted to get a good look at Aiyuk, who we profiled in November, and is beginning to get some first-round buzz. Davis is also an intriguing safety prospect with impressive athleticism.

• The star of the day, in my opinion, was Auburn defensive lineman Marlon Davidson. At the weigh-in, Davidson was 297 pounds, which was up from his listed weight during the season of 278. Davidson played all over the line at Auburn, but as he transitions to the NFL, it is now clear that he will be an interior defensive lineman. Davidson dominated in one-on-ones, winning both with speed and power.

With his added weight, Davidson would be an excellent fit as a penetrating one-gap defensive tackle in the Eagles' scheme. If he continues to play the rest of the week like he did on Tuesday, he could be a first-round pick.

• A player who sort of went the other way on the scale at weigh-ins was North Carolina DE Jason Strowbridge. He was listed all season at 285 pounds, but weighed in at 267. He is now definitively a defensive end. He had a great first day, showing a variety of speed and power pass rush moves. Strowbridge was a guy who wasn't on my radar. I have some catching up to do there.

• One last defensive lineman who looked the part was South Carolina DT Javon Kinlaw, who is arguably the best practice-participating prospect overall heading into this week. In reps that I saw, nobody could block him in one-on-ones.

Obviously, the Eagles' two biggest needs heading into this offseason are at wide receiver and cornerback. However, the Eagles also badly need help at defensive tackle, and there is a good chance that they will spend an early-round pick on one in what is a good interior D-line draft.

• I came to Mobile looking forward to watching the wide receivers on hand here, and so far, I have been underwhelmed. As we noted in our Senior Bowl preview, the receivers projected to go Round 1 (or early in Round 2) are underclassmen, and won't be competing in Mobile. That group includes guys like Jerry Jeudy and Henry Ruggs of Alabama, CeeDee Lamb of Oklahoma, Tee Higgins of Clemson, Justin Jefferson of LSU, and Leviska Shenault of Colorado.

The Eagles better get a wide receiver early, because there is a significant drop in talent from those guys to the seniors competing here. In my view, waiting to select one at some point later in the draft because it is deep and talented would be a bad strategy. Get one early, and if there's another one you like later, then great, get another one.

• One receiver who has had impressive moments so far is Ohio State's K.J. Hill, who was uncoverable in one-on-ones, though in fairness, he's not getting open in the NFL running this kind route that takes nearly four seconds to develop:

I mean, that looks impressive and all, but the quarterback can't throw the ball after he's already sacked. Still, he did have a good day getting separation.

• The other receiver I liked today was James Proche, who was SMU's all-time leader in receptions, yards, and TDs. Both he and Hill are slot receiver prospects at the next level, and I'm somewhat conflicted on the Eagles' need at that spot.

On the one hand, the Eagles are very likely transitioning to running a two-tight end offense as their base set, with Zach Ertz and the emergence of Dallas Goedert. Of course, that means that they won't be in 11 personnel as much, making their slot receiver position less important. Do you simply trust Greg Ward in that role going forward, or do you spend a resource on slot receiver?

Personally, I think the Eagles' offense can be deadly if they can get to a point where they're mixing run and pass in both 11 and 12 personnel, as they can keep opposing defenses stressed and off balance. If I were the Eagles, my preference would be to have a slot receiver who can make plays, as opposed to a player who can just make the plays he's supposed to make, if that makes any sense.

• A few cornerbacks caught my eye on the first day of practices. Notre Dame's Troy Pride has obvious explosiveness. He stuck with receivers deep down the field with ease. I fully expect him to run a fast 40 time. The concern with Pride is that his ball skills need improving. It's a lot easier to learn how to locate and make plays on the football than it is to shave 0.1 seconds off of your 40 time.

I also think that Jim Schwartz will like what UCLA's Darnay Holmes showed on Day 1. He got beaten early a couple of times, but never stopped challenging wide receivers throughout the day, and played with confidence and swagger.

• One of the other deeper positions in the 2020 NFL Draft is at running back. The back that I thought had the best performance on Day 1 was UCLA's Joshua Kelley, who ran really good routes, caught the football well, and showed some wiggle in the open field.

The following are the players the Eagles showed interest in after practice:

As you can see, there are a lot of defensive linemen on that list. That could mean that the Eagles are seriously looking at defensive linemen, or that it was simply a few scouts that were there whose job it is to speak with defensive lineman. Or maybe it's both. ¯\_(ツ)_/¯