Carson Wentz is an obvious keeper, but what about Josh McCown and Nate Sudfeld? 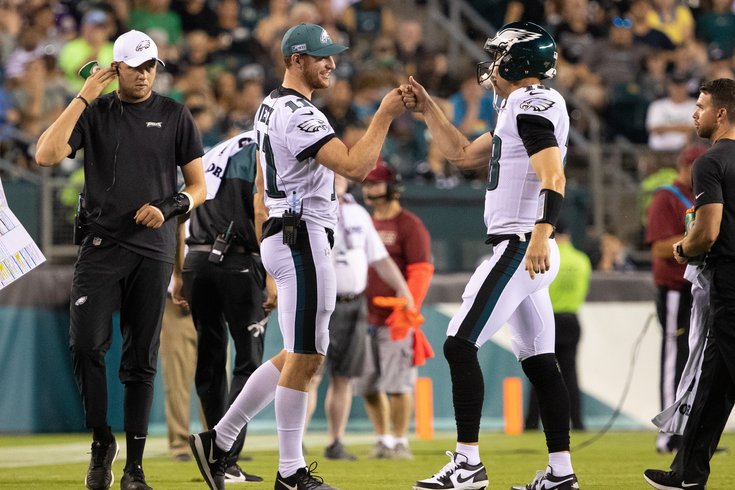 We'll start with the quarterbacks.

In the playoffs, of course, Wentz tried to turn a busted screen play into positive yardage, and was concussed on a dirty Jadeveon Clowney cheap shot. Wentz will be back in 2020, ideally with some wide receivers who can help him.

#JimmyVerdict: I think Wentz just might have a future with the Eagles.

McCown brought a lot of intangibles to the table as a 17-year veteran backing up Wentz, and helping some of the young wide receivers who were added to the roster during the season get up to speed in the offense. McCown could very well have an NFL coaching career in his future.

It is to be determined if McCown will retire, like he did last offseason, before the Eagles coaxed him out of retirement.

"I appreciate everything that Josh McCown did, and brought to this team, this organization," Doug Pederson said of McCown on Wednesday. "His mentoring with Carson I think was second to none, obviously. Sometimes you have relationships where, the coach-player relationship is different than the player-to-player relationship, and I think he and Carson really had a tremendous relationship all season, and really helped him perform at a high level."

After the Eagles' loss to the Seahawks in the wildcard round, McCown became emotional thinking back on the season and his career. It felt a lot like retirement No. 2 is on the horizon, but you never know.

#JimmyVerdict: The Eagles would likely have interest in bringing McCown back as a player if he wants to go one more year, given his positive influence on Wentz, but my bet is that McCown is going to move onto retirement.

Looking back at the preseason, the Eagles looked like they were heading into 2019 with Sudfeld as the No. 2. However, it seemed at times that they weren't 100 percent sold on Sudfeld's readiness as the team's primary backup quarterback, despite what they said publicly. When Sudfeld injured his wrist during a preseason game — coupled with both Cody Kessler and Clayton Thorson looking woefully inept — that finally convinced the Eagles to coax McCown out of retirement to be the No. 2.

"Nate, it was unfortunate, obviously, the injury that happened at the end of camp," Pederson said. "I felt like Nate was kinda poised and ready to be the No. 2 here for us. We'll see what happens this offseason with him."

Sudfeld never regained the primary backup job, and resumed his role as the No. 3 for the third straight season.

If the Eagles truly think he can be the No. 2 in 2020, then they will try to bring him back, seeing as he has now been in the system for three years. If they don't, then what's the point of trying to retain him at all?

I do think he will return, as the projected No. 2, and the Eagles will have a similar plan as the one they had in 2019, when they attempted to draft a developmental quarterback to be their No. 3, but this time ideally drafting one with talent. Or, depending on how much they like 2019 practice squad guy Kyle Lauletta as a player worth developing, maybe a quarterback won't be in the 2020 draft plans.