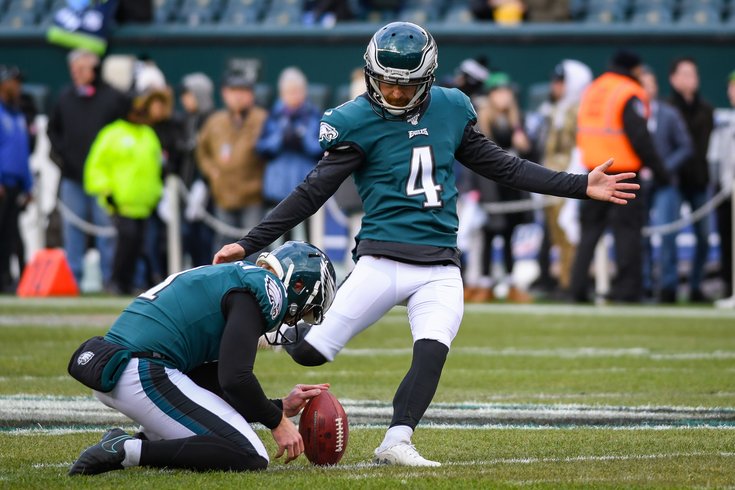 Philadelphia Eagles kicker Jake Elliott warming up before the team's wild-card loss to the Seattle Seahawks.

Today we'll look at the specialists. (All money figures via OverTheCap.)

Through his first three seasons with the Eagles, Jake Elliott has been consistent, hitting roughly 84 percent of his field goal attempts each season:

In 2019, Elliott didn't miss a field goal attempt until Week 13 in Miami, and he would go on to miss four field goals in a four-game stretch. He did go 5/5 to close the season against the Giants Week 17 and the Seahawks in the playoffs.

In November, during his perfect field goal streak, Elliott signed a five-year contract extension worth $19,308,100 in new money. He is only the 13th highest paid kicker in the NFL on an average annual value basis. That was an outstanding deal for the Eagles, given the struggles of other teams around the league that have had trouble finding a reliable kicker.

On the whole, Elliott is right around the middle of the pack in terms of field goal percentage, which is fine for a kicker in a cold weather city who never misses the pressure kicks.

Johnston was ninth in punting average (46.4) and eighth in net average (42.3). He'll be an exclusive rights free agent this offseason, which means he cannot negotiate with other teams. The Eagles can tender him for peanuts, which they will, and he'll remain with the team.

In November, Lovato signed a four-year contract extension worth $4.525 million in new money, and he made the Pro Bowl!

Can't do magic, though. He does keep the tidiest locker in the Eagles' locker room.

MORE: Expect Eagles' coaching search to heat up this week at the Senior Bowl | NFC Hierarchy/Obituary: Packers are dead | Mailbag: How many new starters will the Eagles have in 2020?