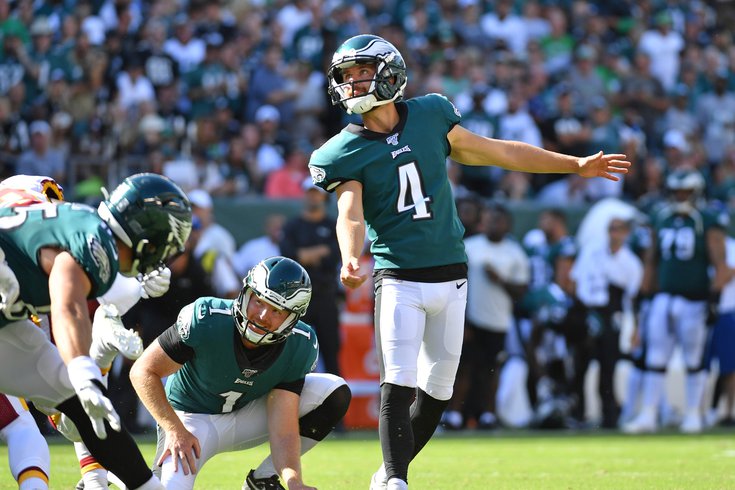 The Philadelphia Eagles announced at roughly 6:00 p.m. the day before Thanksgiving that they signed kicker Jake Elliott to a five-year contract extension. Adam Caplan has the initial money details:

#Eagles K Jake Elliott's 5-year extension is worth over $21m with roughly $10.5m guaranteed, source said. Puts him in top-3 for APY+total guarantees for the position.

Elliott, who was scheduled to be an RFA in March, is 14 for 14 on FG attempts this season.

As Caplan notes, Elliott has not missed any of his 14 field goal attempts this season, though he has missed a couple of PATs. Elliott was playing on an exclusive rights free agent tender in 2019, and he counted for a mere $645,000 on the salary cap. If Elliott's new average per year is indeed $4.2 million, it will be the sixth-highest in the NFL, per OverTheCap.

In his rookie season with the Eagles in 2017, Elliott made 26 of 31 field goals, including a 61-yarder to beat the Giants at the end of regulation in Week 3. It was something of an oddball season as a kicker, as he was money on the long kicks, but was shaky on the short ones. In 2018, Elliott was once again 26 of 31, but his misses were more normal, as they were generally of the long kick variety. A look at his first three seasons in the league:

In his three seasons in the NFL, Elliott is 66 of 76 overall which is a 86.8 percent clip. That's good for fifth all-time among kickers with at least 50 field goal attempts.

Where Elliott has stood out in his Eagles' career so far, however, is that he has ice water in his veins in clutch situations. In the Eagles' Super Bowl season of 2017 alone, he did the following:

• He made the aforementioned game-winning 61-yard field goal against the Giants.

On kickoffs, Elliott can reliably it through the back of the end zone when asked, and is also good at hitting popups that land just shy of the goal line.

Elliott is still only 24 years old, and it made sense to lock him up long-term, given the struggles of other teams around the league that have had trouble finding a reliable kicker.