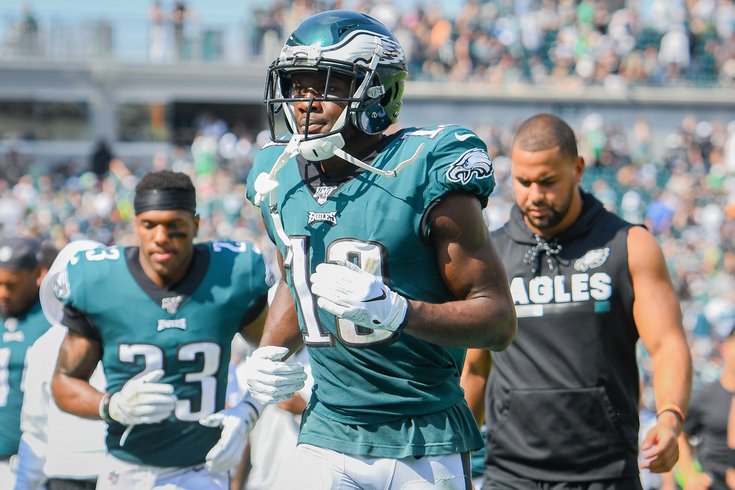 Question from Bebin: How many new starters will the Eagles have to start the season in 2020? 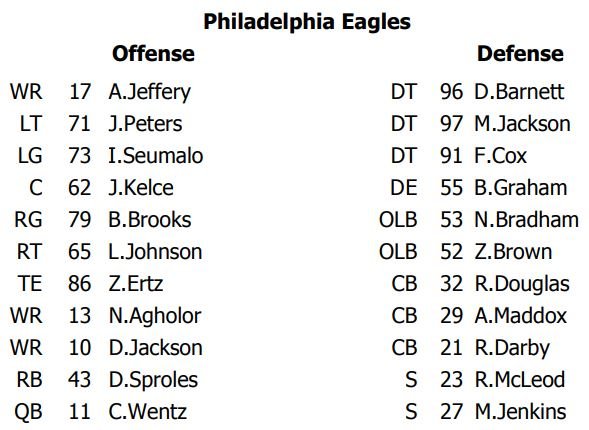 Only two projected defensive starters, Jalen Mills and Kamu Grugier-Hill, didn't start. Offensively, Jordan Howard was the "real" starter, but I guess Darren Sproles was on the field to start the season for some reason.

Let's substitute those guys in, and project the Week 1 starters in 2020. Offense first, with new projected starters bolded:

That was easy. The defense is much more difficult to project. Here's how I see it:

Conservatively, I would say that they'll have at least seven new starters to begin the season in 2020, but probably more.

Question from greenwithenvy: The situation with Malcolm Jenkins kind of reminds me of how the end of Brian Dawkins' career played out in Philly. Dawkins, who also was "old and declining," signed with the Broncos and went on to make another couple of Pro Bowls if I remember correctly. Do you see a parallel?

I see parallels in that both guys played the same position, and meant a lot to the team both in terms of ability and intangibles. However their situations are different.

In Dawkins' case, he was a free agent. The Eagles wanted to keep him, but he got away.

In Jenkins' case, he is under contract in 2020. He can't get away. If he is unhappy, all he can really do is just, you know, not play. Of course, the Eagles could trade him, release him, etc., but Jenkins can't just go sign with another team like Dawkins did.

I do think that there is a lesson to remember about Dawkins, however. From the time Dawkins left in 2009 until the year the Eagles signed Jenkins in 2014, the following players started at least one game for the Eagles at safety:

Some of those names will bring back painful memories for Eagles fans. Good safeties aren't easy to find, and if you move on from Jenkins, there's a chance that it will be a while until you find another one.

Question from Pragmatic: WR, CB, DT, DE. Would every other position as the first pick be a shock?

Yes, unless Jason Kelce retires, and it doesn't seem like that's happening this offseason.

Question from Hinkie: I do see a few mocks giving the Eagles Leviska Shenault. Your thoughts?

I love him as a player, but don’t trust his injury history, and I think he’s going to fall. There’s a good chance of Shenault making people looking dumb, either because some team drafted him too early and he couldn't stay healthy, or because a lot of teams passed on him and he ended up being great.

Question from Buck: You've mentioned taking a QB in the draft to groom but had none listed on your Eagles-only mock. Which of the mid/late round guys interest you?

The following quarterbacks aren’t necessarily an endorsement from me, but rather who I think would interest the Eagles, mainly because they have the prerequisite size and arm strength that the Eagles seem to prioritize.

Question from Andrew: Do you think the Eagles might just get rid of Bradham, do nothing significant at linebacker, and supplement at safety instead, going with Gerry and a 3-safety look as their primary "base" defense. (Mixing in Edwards and/or Riley and/or this year's LJ Fort as well.)

I don’t see them going the route you describe, but it doesn’t sound crazy to me. In that scenario, I think that you would have already come to an agreement with Malcolm Jenkins, who would sort of serve as a linebacker.

Question from Carson Wentz: Why haven't the Eagles banned Josina Anderson from all team facilities?

You can’t just go banning people for reporting things you don’t like. That would be a retaliatory measure, and a suppression of an open and free press. They’ve done it before though.

Question from CS: Please tell me the press box food spread series continues to the Senior Bowl, Owners Meetings, and the Combine. I don't know what it says about me that I would look forward to reading that article, but I would.

Ha, OK, I can do that. They do serve food at each of those events. I can tell you already how they will rank:

The Owner’s Meetings spread is sight to behold. I'm surprised nobody else has ever documented it, actually. The world really should know.