But how much does it matter if they don't drastically improve their personnel? 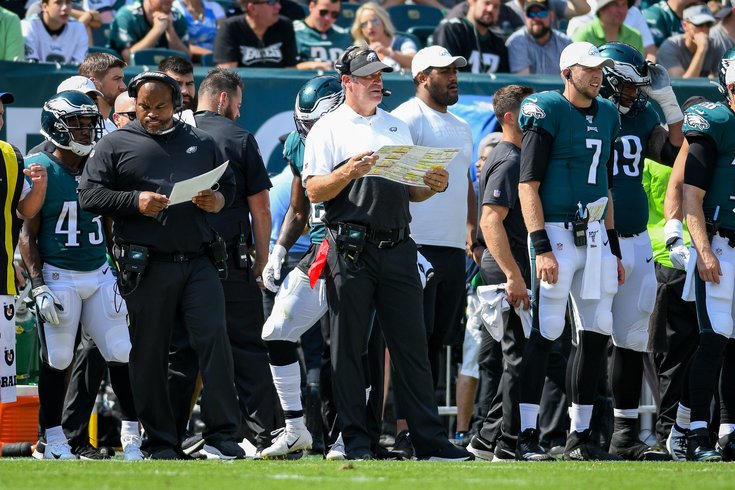 Just under two weeks since parting ways with offensive coordinator Mike Groh, the search for his potential replacement doesn't seem to have a whole lot of momentum, but that could change this week as Doug Pederson and the Eagles head to Mobile, Alabama for the annual Senior Bowl.

On Monday, news came out that the Birds' most-recent interviewee for their vacant OC position, USC coordinator Graham Harrell, won't be joining Pederson's staff in Philly and will instead return to Souther Cal for another year.

SOURCES: #USC OC Graham Harrell, who was a candidate to be the offensive coordinator of the #Eagles, is expected to remain with the Trojans, sources tell me & @AntonioCMorales.

This news comes on the heals of Ravens QB coach James Urban, who reportedly interviewed with the Eagles, turning down Philly to remain in Baltimore, and LSU offensive coordinator Joe Brady taking the same position on Matt Rhule's newly-constructed staff in Carolina. Other names that have been floated out there, like former Eagles QB coach (and Vikings and Jags OC) John DeFilippo are also off the board after taking a job elsewhere.

So, why are the Eagles seemingly having such a tough time replacing Groh? Well, one of the first and most obvious reasons is that the Eagles' job isn't actually all that coveted among coordinators, largely because Pederson calls the plays in Philly. Not only does that cut off some of the autonomy the top assistants would likely prefer, but it also hurts their chances at earning a promotion to a head coaching job. Because, let's be honest, pretty much every OC in the league has plans on being a head coach some day.

At least in the case of Harrell, however, it appears the play-calling duties weren't the dealbreaker, as it was previously reported that the 34-year-old would be willing to take a backseat. Perhaps, given this nugget from Antonio Morales of The Athletic, maybe his decision to return to USC had more to do with the Air Raid scheme in which he so thoroughly believes.

Pederson calls plays for the Eagles, but a source intimated that wouldn’t be an issue for Harrell should he be offered the job.

There is also a question of fit. Harrell runs a very simple offense, one that is short on words. He’s spoken about his time in the NFL before and how unnecessarily complicated some play calls were back in his playing days with the Green Bay Packers.

Harrell’s time in the NFL, he said, strengthened his beliefs about the Air Raid and why he believes it’s the right offense to run. At USC, he coordinated a quarterback-friendly offense, and it showed.  [theathletic.com]

Of course, there's always the possibility that Harrell interviewed, the Eagles decided he wasn't the right fit, and Harrell simply returned to USC without any other choice. No matter how it played out, however, the Eagles will now need to turn their attention elsewhere — it was reported over the weekend that they are expected to request an interview with Chiefs QB coach Mike Kafka — and this week is a great week to do that, as the football world descends on Mobile.

And according to Jeff McLane of the Inquirer, there are likely more names on the Eagles' offensive coordinator wish list — we just don't know who they are yet — who could become known as the week goes on.

Important to note that the #Eagles haven’t had an open process in their OC search. Harrell is just one of the names I was able to unearth. Could be more movement with Doug Pederson in Mobile for Senior Bowl practices this week. https://t.co/HZGcg2PZxe

That's good news for Eagles fans who are anxiously waiting for the Eagles to fill their four current coaching vacancies — offensive coordinator, wide receivers coach, defensive backs coach and defensive line coach — following a season in which the team was able to claw its way to a playoff berth but ultimately fell short of the goals set at the beginning of the season.

But what if the search for all these new coaches, specifically the pending offensive hires, are just a smokescreen to help the Eagles cover up what the real problem was in 2019: the personnel. And while Pederson has said that the decisions to make these coaching changes were his own, that's what he has to say publicly. Behind the scenes, however, there's the chance that a much different scenario played out, one in which owner Jeffrey Lurie forced his head coach's hand because he believed that a fresh set of eyes was necessary.

As John McMullen wrote for 973espn.com, it was unlikely that Pederson would've made any changes on his own because he's too loyal to his own guys, but Lurie felt the team needed "new eyes" from the outside, hence the lack of news regarding a guy like Duce Staley and the recent interviews with Urban and Harrell. If that's the case, it sure seems like the Eagles are scapegoating their assistants by showing them the door.

And given the state of their current roster, one that Howie Roseman admitted himself could have (and should have) been better, perhaps shiny coaches aren't the thing that will suddenly have the Eagles playing deep into the playoffs again. Maybe, as McMullen points out, that will require better personnel on the field.

All the white noise -- and the new hires -- shouldn't obscure the real issue here, though. A Super Bowl-winning coach has earned the right to pick his assistants, especially when the ring was followed to by two more postseason appearances despite significant attrition coupled with poor personnel decisions.

The definition of a scapegoat is a person who is blamed for the wrongdoings, mistakes, or faults of others, especially for reasons of expediency.

The Eagles' coaching staff-shakeup is a sleight of hand trick, a public-facing entity hoping its customers focus on the shiny quarter instead of the substance.

A broken leg doesn't need a Band-Aid and in this case, if the injured limb is ultimately repaired, it will be the result of better personnel decisions not Plan C at The Senior Bowl.  [973espn.com]

Unfortunately, it's too late to debate whether or not overhauling the coaching staff was the right call, because there's nothing that can be done at this point. The only thing the Eagles can do now is to make sure they hire the right replacements, whether internal or external, and try to do a better job at the draft and in free agency than they did a year ago. And if they don't nail that second part, the first part won't matter all that much.