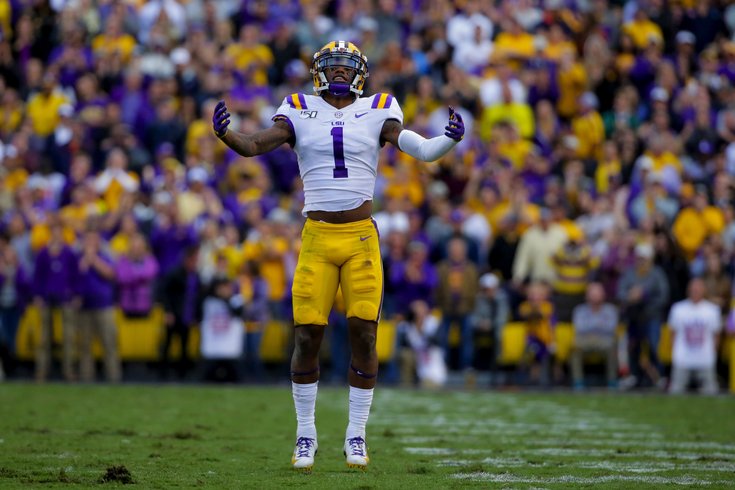 If there's a player competing at the 2020 Senior Bowl who could interest the Eagles in the first round, my bet would be on LSU CB Kristian Fulton.

NFL coaches, front office guys, scouts, and media will overtake the city of Mobile, Alabama this week, as the Senior Bowl week of practices will kick off on Tuesday, and run through Thursday, with the game being played on Saturday.

PhillyVoice will be there, and here's who we'll be watching:

The 2020 NFL Draft is going to be loaded with wide receiver talent, both at the top of the draft, and throughout.

The receivers projected to go Round 1 (or early in Round 2) are underclassmen, and won't be competing at the Senior Bowl. That group includes guys like Jerry Jeudy and Henry Ruggs of Alabama, CeeDee Lamb of Oklahoma, Tee Higgins of Clemson, Justin Jefferson of LSU, and Leviska Shenault of Colorado.

As we pointed out in our "stay or go" series, the Eagles don't have any wide receivers that they can feel good about, long-term, and while a burner is perhaps of highest importance, the Birds will be shopping for receivers in all shapes, sizes, and skill sets. Here are the receivers competing at the Senior Bowl, sorted by overall prospect ranking, via thedraftnetwork.com:

I agree that the top receiver among the Senior Bowl crop, at least heading in, is Aiyuk, who we profiled back in November. He could be a second-round pick, whereas the rest of these guys are likely to be selected anywhere from rounds 3-7, and some perhaps not at all.

The cornerbacks (again, duh), and safeties

The corners aren't as interesting as the receivers from top to bottom, but there is a player who has been mocked to the Eagles in the first round in LSU's Kristian Fulton, who will be among the highest-rated players in Mobile, though it appears that he won't participate in practices or the game.

In addition to the corners (specifically outside corners who can actually run a little, ideally), the Eagles will likely be doing their homework on safeties as well, seeing as Rodney McLeod is a free agent, and Malcolm Jenkins has said that he isn't playing for the Eagles in 2020 on his current contract.

Here is how TDN ranks the defensive backs competing at the Senior Bowl:

Unfortunately, in addition to Fulton, a number of senior corners are not competing at the Senior Bowl this year. They are TCU's Jeff Gladney, Alabama's Trevon Diggs, Virginia's Bryce Hall, and Ohio State's Damon Arnette, all of whom are logical Eagles targets.

The Eagles need to start developing some youth in the trenches on the defensive side of the ball, as they have not been able to stay healthy at DT. The Senior Bowl is loaded this year with disruptive defensive tackles who could interest the Eagles. The four most noteworthy, in my opinion:

• Javon Kinlaw, South Carolina (6'6, 305): Chiseled monster with very good strength and athleticism, who will likely be a first-round pick. If there's a player I could see the Eagles eschewing a wide receiver or cornerback for at 21, Kinlaw is a guy who would make sense.

• Neville Gallimore, Oklahoma (6'2, 302): Underwhelming college production, but he's an absurdly athletic freak of nature who some believe will go Round 1.

• Raekwon Davis, Alabama (6'7, 312): Davis has a similar body type as Kinlaw, and is high-energy, high-character player who was perhaps hurt by staying in school. After a highly productive 2017 season, his numbers plummeted, which is odd. He'll still easily go in the the first two rounds, barring any surprises.

The defensive ends are always worth paying attention to, obviously, because the Eagles draft so many of them. In fact, they've selected a DE in each of their last 8 drafts. The edge rushers that I'll be watching:

• Kenny Willekes, Michigan State (6'4, 260): His name popped up all season long while I looked for players to profile for my Grocery Shopping series, but I never profiled him. He's a hustle guy who plays sound assignment football, but doesn't bring much in the way of explosiveness, though he does have good production (18 sacks the last two years). He does make sense as a rotational guy who makes opposing tackles work hard when the starters come out.

The Eagles are going to need more linebacker depth this offseason, and they tend to prioritize LBs with some coverage chops. In my opinion, the following two off-ball linebackers fit the mold of what the Eagles look for:

• Kyle Dugger, Lenoir Rhyne (6'2, 220): Comically dominant player at D-II level. He'll work out at safety in Mobile, but I think he's a linebacker in the pros.

If Halapoulivaati Vaitai moves on in free agency as we expect him to do, and the Eagles have concerns about Jordan Mailata, as they should, the Eagles will need to find a swing tackle to develop, and the Senior Bowl is a great place to evaluate mid-round guys who can fill that role.

A short list of the players with LT-RT experience in college, who are likely to be Day 3 picks, who I think make some sense for the Eagles:

Of particular interest are Peart and Taylor, who offer intriguing athleticism.

At some point soon Jason Kelce is going to retire, so the Eagles either need to have a player ready to step in at center when that happens, or have a LG ready to start if they view Isaac Seumalo as the center of the future.

LSU's Lloyd Cushenberry is high-character player with guard and center experience who could step in for Kelce and lead the offensive line whenever Kelce calls it a career. Temple's Matt Hennessy is another center who makes sense.

The belief here is that the Eagles will draft another running back this year, and a tough inside runner would make sense, as Jordan Howard is likely a year-to-year guy even if he re-signs with the team in 2020. The Day 3 running backs who I believe can contribute in that kind of role:

And then another back who really intrigues me is Memphis' Antonio Gibson, who is sort of a running back / wide receiver hybrid.

We'll see if the Eagles try to draft-and-develop a backup quarterback again, like they did in 2019 with Clayton Thorson.

There are a pair of quarterbacks who will get a lot of attention at the Senior Bowl this year, in Oregon's Justin Herbert and Utah State's Jordan Love, but they'll be long gone by the time the Eagles would consider drafting one.

If there's a Day 3 quarterback that I could see the Eagles falling for, it's Colorado's Steven Montez. At 6'5, 230, with a strong arm and leadership qualities, he fits the profile of quarterback the Eagles tend to prefer.