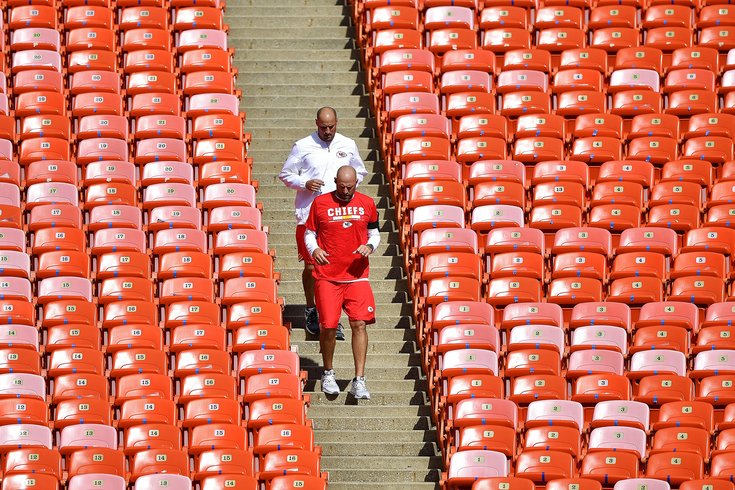 The Eagles were reportedly hoping to interview Chiefs quarterbacks coach Mike Kafka during the bye week between Kansas City's win over the Titans in the AFC Championship and their Super Bowl matchup against the 49ers, but there were also reports that Andy Reid, who apparently thinks a lot of Kafka, could block that interview.

As it turns out, simply the threat of Reid blocking the interview — which he reportedly would've done — was enough for the Eagles to back off and opt to not even bother with the request, according to multiple reports.

#Chiefs QB coach Mike Kafka will stick on Andy Reid’s coaching staff in 2020, sources say. The #Eagles had interest in Kafka as an OC candidate but they’re aware Reid isn’t letting him go. No official request so he technically wasn’t blocked. Possible he gets a new title in KC.

Chiefs QBs coach Mike Kafka won’t interview with the #Eagles for their OC vacancy, NFL sources said. @MikeGarafolo was first to report. Andy Reid has a long history of blocking when he can. There wasn’t a formal request, but the Eagles had interest.

If it feels like potential candidates to replace Mike Groh are dropping like flies, that's because they are. The Eagles have previously interviewed USC offensive coordinator Graham Harrell and Ravens OC James Urban, both of whom turned the Birds down in order to return to their current positions.

One potential reason candidates are hesitant to join Doug Pederson's staff is because they would not be the ones to call the plays. That's the head coach's job in this organization, and it's a power he probably won't be relinquishing any time soon. And because of that, the Eagles' best options might be internal, like Duce Staley, although that would go against the idea of bringing in a fresh voice, something that's been alluded to throughout this process.

So where could the Eagles turn next now that they seemingly have made little to no ground in the hiring process? It's been two weeks since the team fired Groh, along with wide receivers coach Carson Walch, and they don't seem to be any closer to a decision than they were when they made this move. The lone name that has been around since the beginning of the search is former Dolphins assistant (and Lions head coach) Jim Caldwell.

However, as McLane noted on Monday, this has not been an "open process" for the Eagles, and there are likely more names out there that simply haven't been uncovered yet. Either way, with much of the football world crammed into the same handful of hotels in Mobile, Alabama for the Senior Bowl, there's likely to be a few more names trickling out this week.

At least there better be, as the Eagles have four coaching vacancies (OC, WR, DL, DB) that needed to be filled. And time is increasingly not on their side.