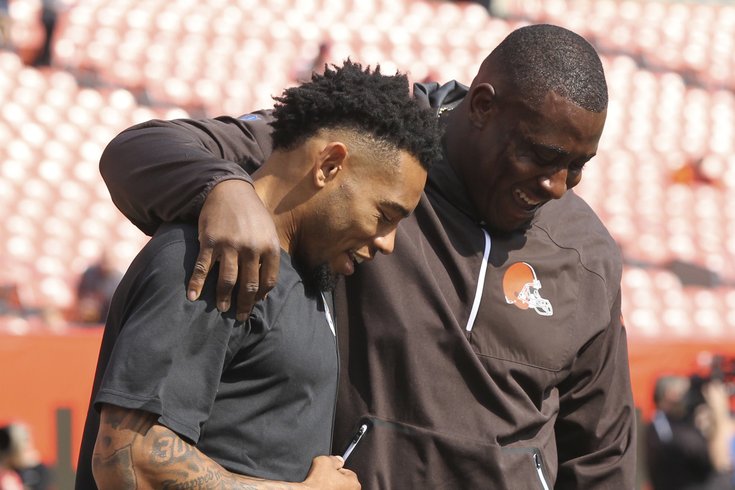 The Eagles could be inching closer to filling one of their vacant assistant coaching positions — they currently have four, including offensive coordinator — as they'll reportedly interview current Browns defensive backs coach DeWayne Walker for the same position in Philadelphia.

#Browns DB coach DeWayne Walker is in Philly today interviewing with the #Eagles. He was “under consideration” to remain with the #Browns. @JasonLaCanfora 1st reported he was expected to interview w/ #Eagles

Former Eagles defensive backs coach Cory Undlin, who had been with the Eagles since 2015 and was actually one of the assistants to stick around from Chip Kelly's time in Philly, left earlier this month to take the defensive coordinator job on Matt Patricia's staff in Detroit.

Walker has been with the Browns since 2017, but the Eagles were granted permission by Cleveland to interview him for the same position because new head coach Kevin Stefanski is still filling out his staff and has not yet decided on whether or not to keep Walker, although according to Cleveland.com, he was being considered as a potential holdover from the previous regime.

So what would Walker bring to Doug Pederson's staff if the Eagles do indeed hire him? Here's a look at his resume, which includes 14 years of NFL coaching experience, courtesy of Reuben Frank of NBC Sports Philadelphia:

If Walker joins the Eagles, he would bring with him a lengthy resume. He has been a defensive backs coach for five different NFL teams (Browns, Jaguars, Redskins, Giants, Patriots), was once the DC at UCLA and the head coach at New Mexico State from 2009-12.

But let’s focus on his NFL coaching career. In his last two stops with the Jaguars and Browns, he’s helped develop first-round picks Jalen Ramsey and Denzel Ward, who have both been Pro Bowlers within their first two seasons. There’s a good chance the Eagles will draft a cornerback pretty high in April and it’ll be important to have a coach ready to develop that talent.  [nbcsports.com]

That seems to be exactly what the Eagles need, especially if they're trying to get younger — and get the most out of those younger players. But, as Frank and others have pointed out, if the Eagles opt to address their cornerback situation with veterans via free agency — like Chris Harris or Byron Jones — Walker has had success with older players as well, including Hall of Famer Ty Law.

Bringing in Walker could also be a boost for cornerbacks like Sidney Jones and Rasul Douglas, who have seemingly fallen out of favor in Philly and rode the bench during their wild-card loss to the Seahawks. Here's more from Mike Kaye of NJ.com, who was one of the first to report on Walker's interview with the Eagles:

If Walker were to join the staff, it could be good news for Rasul Douglas and Sidney Jones. Walker tends to favor defensive backs with size and length. He has coached in several different defensive systems but prefers to use press coverage in zone and man schemes.  [nj.com]

As you can see, Walker checks a lot of boxes for the Eagles — and even has ties to the organization, as he worked with VP of football operations Andrew Berry, a candidate for the Browns GM job, during their time together in Cleveland. Will that be enough to make him the newest member of Doug Pederson's coaching staff? We'll find out soon enough...