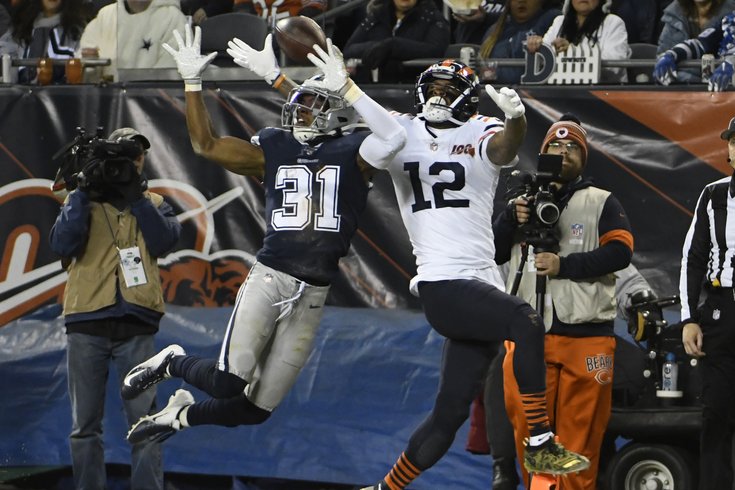 In what may be some of the least surprising news of the NFL offseason, the Philadelphia Eagles are reportedly going to try to improve their secondary by adding some cornerback help in free agency.

At least that's the word from Tony Pauline of ProFootballNetwork.com, who is down in Mobile, Ala. with much of the football world covering the Senior Bowl. But not only does Pauline say the Eagles will be aggressive in their pursuit of a free agent cornerback, but he also gives a pair of names that might be of interest to Philly.

Word here in Mobile is that the Philadelphia Eagles will go hard after a cornerback in free agency. Chris Harris and Byron Jones are two of the names being thrown around, but I expect the Eagles to turn over every rock in free agency in an attempt to fill the position.  [profootballnetwork.com]

The Eagles' reported interest in Harris should not come as a surprise after Howie Roseman and Co. pursued the Broncos cornerback ahead of the NFL trade deadline but ultimately balked at the asking price. Harris, who will turn 31 in June, has appeared in 139 games over his nine seasons in the NFL, all with the Broncos, and has recorded 20 interceptions to go with 86 deflections, six forced fumbles and four touchdown returns. And while his ability to play both on the outside and in the slot could be appealing to the Eagles, his age could be a drawback. With the Eagles actively trying to get younger this season, the 5-foot-10, 199-pound Harris may be on the wrong side of 30 to get the long term deal he is likely looking for in Philly.

When the Eagles had the chance to get him at the deadline, it was likely as a rental. And if Roseman and the Eagles wanted him for the long term and felt confident they could sign him here, maybe they would've been willing to give up a little more. At some point, Roseman, who has already admitted he has a tendency to get attached to his own guys, is going to need to start making hard decisions about the players already in the locker room. And those decisions would be made a lot tougher if the team is going out and signing aging veterans to replace them.

Jones, on the other hand, might be just what the team needs at corner. At 27, Jones is considered one of the top free agent cornerbacks on the market and will cost a bit more than Harris. But the former Cowboy has all the skills the Eagles would want in a corner, even if he doesn't have the numbers to back it up (just two interceptions and 43 deflections in 73 starts). With great size (6-foot-1, 200 pounds) and the ability to shut down the opposition's top receiver, Jones will be highly coveted on the open market.

If Jones is so good, that begs the question — why would the Cowboys let him go in free agency? Here's what Brandon Gowton of Bleeding Green Nation, who also noted that Pauline has been on the money with some Eagles rumors in the past, had to say about that very topic:

But if Jones is so good, why aren’t the Cowboys looking to keep him? Answer: they can’t afford to keep everybody. Dallas gave out a bunch of big money deals last year to the likes of DeMarcus Lawrence, Jaylon Smith, La’el Collins, and Ezekiel Elliott. Now the Cowboys need to pay colossal quarterback money to Dak Prescott in addition to retaining Amari Cooper. And then Dallas has 22 other free agents to consider on top of that.  [bleedinggreennation.com]

So what does all this mean for the Eagles secondary? Well, for starters, big changes are in store no matter how the team plans on addressing it. Starting cornerbacks Ronald Darby and Jalen Mills are both headed for free agency. Rasul Douglas and Sidney Jones, both of whom sat during the Eagles playoff loss to the Seahawks, aren't likely to be promoted to starters given that they couldn't even get on the field against Seattle. If fact, one or both could be traded before next season, especially if the Eagles are as active in the cornerback market as expected. And then there's Avonte Maddox and Cre'Von LeBlanc, who will both likely be back next season, although how big of a role they'll play remains to be seen.

There are a lot of moving parts, for sure, and things are really going to pick up when free agency opens in March. Stay tuned.