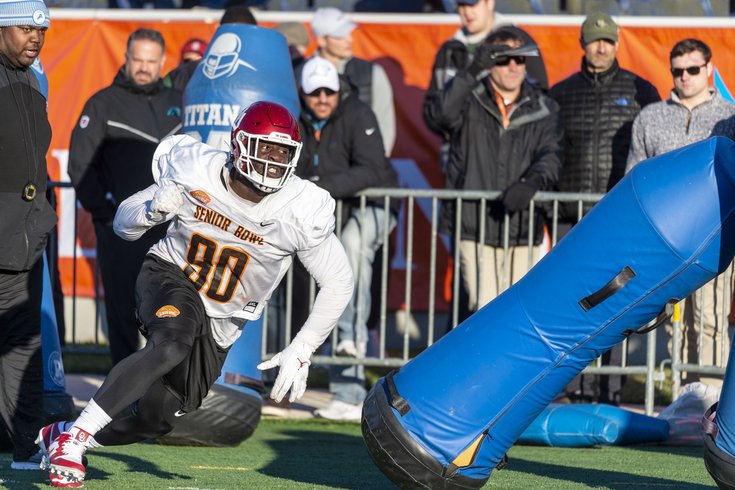 After each practice at the Senior Bowl, players are available on the field to speak both with NFL scouts and media. Teams will speak with hundreds of prospects throughout the draft process, at the Senior Bowl, the NFL Combine, at pro days, individual workouts, and visits to team complexes.

One reason interviewing draft prospects at the @SeniorBowl is important this year: NFL teams were informed recently they’ll have 45 18-minute formal interviews at the combine, rather than 60 15-minute interviews. It’s related to schedule changes that move drills to primetime.

• Steven Montez, Colorado (6'4, 240): He fits the profile of the bigger quarterback with a strong arm that the Eagles have targeted in the Doug Pederson era.

• Bradlee Anae, Utah (6'3, 257): The Eagles like their pass rusher prospects to have good college production, and Anae had 30 sacks over his career at Utah, and 13 sacks in his senior season. He'll probably be a Day 2 pick.

• Trevon Hill, Miami (6'3, 233): Weighed in at 6'3, 233, so he isn't a fit as a DE in the Eagles' scheme. Maybe they view him as a linebacker prospect? I doubt that, as they're more likely to convert safeties to linebacker than edge rushers to linebacker.

• Jason Strowbridge, North Carolina (6'4, 267): Weighed in at 267 pounds, well below his listed weight of 285. He does have some inside-outside pass rush ability, and the Eagles should have legitimate interest.

• Marlon Davidson, Auburn (6'3, 297): Weighed in much heavier than his listed weight at 278. He played inside and outside at Auburn. At 297, he'll be at DT in the NFL, and he'd be a good fit in the Eagles' defense as a penetrating 3-tech. Arguably the best player on the field on Day 1, had a walking boot on his foot Day 2.

• Leki Fotu, Utah (6'5, 337): Massive mountain of a man who did not participate this week because he was flagged for an injury.

• Neville Gallimore, Oklahoma (6'2, 304): Athletic freak of nature who could sneak into the first round with an excellent Combine, more likely a Day 2 guy, in my opinion.

• Benito Jones, Ole Miss (6'1, 321): Short, squatty DT who was highly recruited out of high school. Decent college production, body type reminds me a little too much of Elijah Qualls.

• Josh Metellus, Michigan (5'11, 210): Physical, aggressive player I thought might be a better fit as a linebacker, but his weigh-in results ended that thought. Probably more of a box safety, who can cover tight ends.

We'll update as we see more on-field interviews on the final day of practices (Thursday).