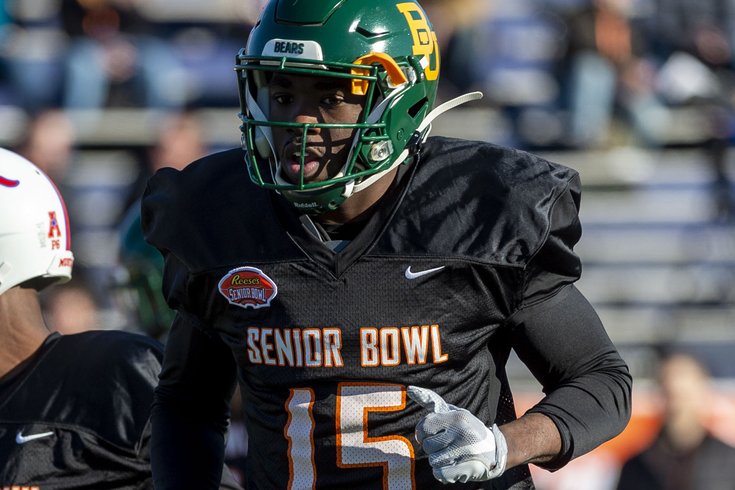 Baylor WR Denzel Mims was an obvious standout on Day 2 at the Senior Bowl.

Day 2 of Senior Bowl practices are in the books, and we have notes. In case you missed our notes from Day 1, you can find them here. Let's just get right to them.

• Just like on Tuesday, the receivers were underwhelming on Wednesday. One receiver who did stand out in a good way was Denzel Mims of Baylor. Here he is using his size to beat speedy Notre Dame CB Troy Pride down the sideline for a TD.

Baylor WR Denzel Mims another clear winner of Senior Bowl 1-on-1’s. Works to stack the CB and uses an arm bar to protect the catchpoint. He’s having an impressive week. pic.twitter.com/DUgPWWIDyW

Mims has good size (6'3, 206), a track background, and he had good production at Baylor over the last three seasons. One perceived area of concern was his route running, but I have not seen that. He has consistently won his 1-on-1's with good routes. I think he's a Day 2 pick. It's be interesting to see what he runs at the Combine.

• One receiver who really struggled on Wednesday was Liberty's Antonio Gandy-Golden, who finished fourth in the nation in 2019 with 1,396 receiving yards. He had an awful Agholor-esque drop deep down the sideline, and he failed to track another deep ball that could have been caught. He was better on Day 1.

• Yesterday we noted SMU's James Proche and Ohio State's K.J. Hill as potential slot receiver targets. We failed to add that they both returned punts in college. If the Eagles theoretically aren't going to put a significant resource into a slot receiver because they're likely to fully transition to a 2-tight end offense, then taking a slot receiver who can also return punts would certainly add value.

• On the tight end front, in our Grocery Shopping series, we did not profile a single tight end all season long, because, well, the Eagles have Zach Ertz and Dallas Goedert, and they're not going to spend a high pick on one. However, if they are truly going to commit to becoming a 2-tight end offense, it would be smart to have a third tight end on the roster who they can feel good about should Ertz or Goedert go down.

While my sense is that they will simply go back to Richard Rodgers and/or Josh Perkins in 2020, this is a strong tight end class, and the Eagles should be open to taking one on Day 3 if the value is there.

One tight end who stood out in passing drills was LSU's Stephen Sullivan, a player I had never heard of, despite casually watching my share of LSU games this year. On the season, he had 12 catches for 130 yards and no TDs. For his career, he had 46 catches for 712 yards (an impressive 15.5 YPC) and 3 TDs. It's understandable why his numbers were down in 2019, playing with LSU's ridiculous receivers, and TE Thaddeus Moss (Randy Moss' son).

Sullivan has a wide receiver background, and it showed, as he got open all day against linebackers and safeties, gliding through the secondary and making smooth catches on the run.

Physically, Sullivan has great size, at 6'6, 245 pounds, 10 3/8" hands, and an 85 1/8" wingspan. By comparison, the player next biggest wingspan among tight ends competing at the Senior Bowl has a 79 1/2" wingspan, which is going a long way to say that Sullivan has a huge catch radius.

I think that a player like him makes a lot of sense as a high upside developmental guy.

• One offensive lineman who makes sense for the Eagles as a Day 3 swing tackle prospect is UConn's Matt Peart. He played LT his first two seasons in college, and moved to RT for his junior and senior seasons, and has also played some guard. He has held his own against a decent group of edge rushers here.

• Yesterday we noted that Notre Dame's Troy Pride showed off impressive speed, sticking with receivers deep down the field, however, we also noted his concerning lack of ball skills, and the potential of being overmatched, size-wise, deep down the field. Many of our commenters pointed out that Pride's "snapshot scouting report" sounds a whole lot like Ronald Darby, which was astute. Pride got beaten by a bigger receiver in Mims despite being able to stay with him (as shown above), and sort of olé'd a running back on the edge in a thud drill.

Another corner who has no such physical concerns is Pitt's Dane Jackson, who has been aggressive throughout the first two days. On Day 1, he made a number of nice plays on the football, and helped himself. On Day 2, he got a little over-aggressively grabby, drawing penalty flags on (by my count) three occasions.

• A safety who came into Mobile with some hype was Kyle Dugger, a big, 6'1, 217-pound athletic specimen from tiny Lenoir-Rhyne, with a fun highlight reel. I thought that he might make sense as a linebacker prospect for the Eagles. Nope. He has shown that he is more than capable as a safety, covering wide receivers. He had a nice INT on Wednesday. Another big, small-school safety who has shown some coverage ability is Southern Illinois' Jeremy Chinn, who goes 6'3, 219. The Eagles don't seem to care much about size on the back end. The guess here is that Dugger and Chinn will go earlier to a team that prioritizes that size than where the Eagles will value them.

• A linebacker that I really like (and had him in the fifth round of my Eagles-only mock draft, version 1.0) is Wyoming's Logan Wilson. Update: He ain't lasting until the fifth round. Wilson has shown very good coverage skills, and looks equally comfortabale against the run.

• The Eagles have talked to a ton of defensive linemen here after practices. Here's a list of players we observed speaking with Eagles' scouts after Wednesday's practices:

To note, one of the personnel folks chatting up the edge rushers is Connor Barwin, so it would seem that part of his role, for now, is focusing on edge rushers, which makes sense.