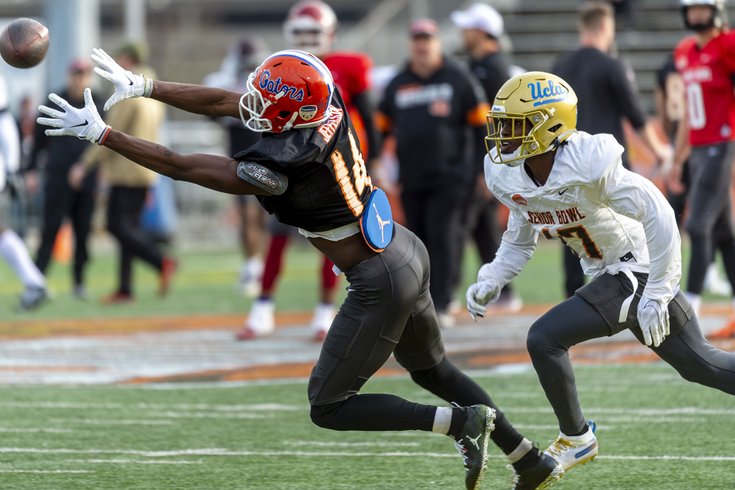 Day 3 of Senior Bowl practices is in the books, and we have notes. In case you missed our notes from Day 1 and Day 2, go check them out. On Day 3, we were moved to South Alabama's campus for an indoor practice, and the view wasn't particularly awesome, so for this version, I'll just name the player at each position that I think is the best fit for the Eagles.

• Steven Montez, Colorado: He's big, and has a strong arm. That's good enough for me in terms of linking the Eagles' interest to him.

We haven't really talked much about the quarterbacks here this week, because the Eagles don't need one, but Oregon's Justin Herbert and Utah State's Jordan Love will probably be the first two players competing at the Senior Bowl selected in the 2020 NFL Draft. From what I saw all week (and again, I was paying attention in the same way that I was paying attention to Carson Wentz back in 2016), I'd rank them like so:

Herbert was named Senior Bowl Practice Player of the Week:

I can see that. I missed the final practice of the week on Thursday, and my understanding is that Herbert lit it up. Herbert and Love both had strong showings at the Senior Bowl, and many believe that they both solidified top 15 selections in the 2020 NFL Draft, which is great for the Eagles.

Why? Well, again, they don't need a quarterback, so the more that go early in the draft, the more players of positional need will have a chance to fall to the Eagles at pick 21. Right now, it looks like four quarterbacks will get picked before 21. They would be Herbert, Love, LSU's Joe Burrow, and Alabama's Tua Tagovailoa.

• Joshua Kelley, UCLA: He hit holes with authority, showed some juice as a runner, and he caught the ball really well. I love his fit in the Eagles' offense.

• Denzel Mims, Baylor: After a really good performance on Day 2 making plays deep down the field, Mims stood out again on Day 3, making play after play in the red zone. Here's a one-handed grab he made in the corner of the end zone:

Denzel Mims really has been special all week, such an explosive players with advanced route-running technique.

He has size, a track background, and he ran way better routes than anticipated. If he has a really good Combine, he could be an early Day 2 pick.

The Eagles would be smart to draft a tight end on Day 3, if they're going to commit to a two-TE offense.

• Matt Peart, UConn: He has left-right tackle versatility, and has also played some guard, so he makes a ton of sense as a possible replacement for Halapoulivaati Vaitai, if Big V leaves in free agency.

• Jason Strowbridge, North Carolina: He has good quickness for his size (6'4, 267), and his strength reminds me a bit of Brandon Graham. He should have some inside-outside versatility in the NFL:

He's going to be a Day 2 pick. I think he'd be great value to the Eagles in Round 3, if he's still there, but still a reasonable pick in Round 2.

• Larrell Murchison, North Carolina State: A little undersized at 6'2, 294, but he has impressive quickness, and can be disruptive in the Eagles' scheme that requires defensive ends to make plays:

Larrell Murchison was one of my top players yesterday. Flashed some very good agility and won several reps with spin moves like this. But also played with leverage and technique against the run. Understood when to drop his near knee to anchor vs double teams. pic.twitter.com/P6ag2nmQpY

Round 4 would be good value.

• Logan Wilson, Wyoming: I've written about him plenty already, so in the interest of not sounding like a broken record, we'll just move on.

• Darnay Holmes, UCLA: He's got swagger, he's aggressive, he'll hit, and he makes plays on the football. Jim Schwartz will love this kid.

Darnay Holmes was a big winner from Day 1, stood out in practice and in interviews.pic.twitter.com/Jg8P647Oha

• Kyle Dugger, Lenoir-Rhyne: I didn't identify any prospects that felt like obvious fits for what the Eagles seem to prioritize in their safeties, so I'll just get a little lazy here and pick a safety that should interest all 32 teams for his blend of size, athleticism, and competitiveness.