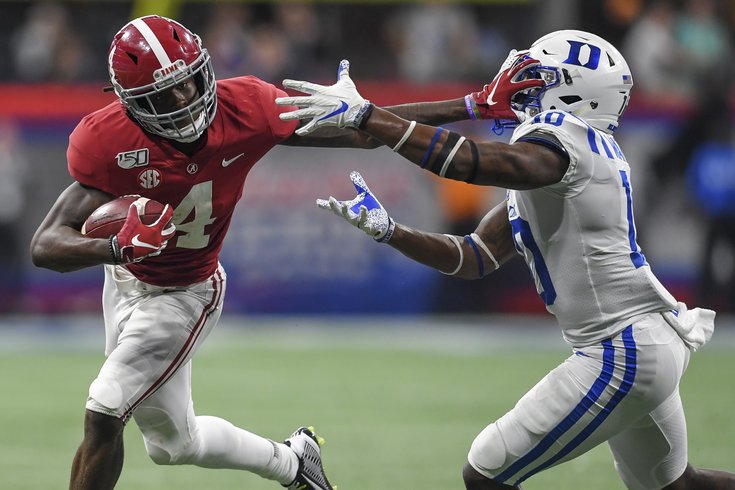 There are a lot of good fantasy team names if you wind up drafting Jerry Jeudy.

Bryant originally enrolled at Clemson, where he succeeded Deshaun Watson as the starting quarterback. At Clemson, he beat six top-25 teams, a Clemson record, and led Clemson to the College Football Playoffs in 2017, before the Tigers lost to Alabama.

In 2018, he started four games, all wins, before he was benched in favor of Trevor Lawrence. In December of 2018, Bryant transferred to Missouri, Clemson won the National Championship, and a petty Dabo Swinney decided that Bryant shouldn't get a championship ring.

In 2019, playing for Missouri as a graduate student, Bryant and his new Tigers team got out to a hot 5-1 start, before their season fell apart when Bryant started racking up an assortment of injuries, that he tried to play through.

Bryant will be an interesting NFL prospect. Some teams will knock him for transferring in-season. Others will admire the toughness he showed playing through his injuries this season.

As a player, Bryant has good size (which the Eagles will like), he can run, and while he doesn't have a cannon for an arm and his elongated release will need a lot of work, he is efficient running RPO concepts, which, of course, the Eagles ran a ton of with Nick Foles during their Super Bowl run. A highlight reel from his 2017 season at Clemson:

The Eagles swung and missed on Clayton Thorson in the fifth round of the 2019 NFL Draft. I think they'll try again in 2020, and Bryant makes sense to me as a late Day 3 developmental prospect.

Before the season began, I wasn't even going to bother profiling Jeudy, on the premise that I felt there was no way in hell he'd be available whenever the Eagles are picking. Aside from a small frame that might make teams worry about his durability at the next level, there really isn't anything not to like. His numbers:

Jeudy has water bug-like quickness in small spaces, and great speed when given some room to run. He's also already an outstanding route runner who often makes opposing defensive backs look ridiculous, and he's a sure-handed receiver who doesn't drop many passes.

A highlight reel (also, note that Tua is really good too):

As we've noted repeatedly, this draft class is absolutely loaded at wide receiver. If the Eagles don't make the playoffs, there's an outside chance the Eagles could land Jeudy. It would require a lot of quarterbacks, offensive linemen, and pass rushers to go early, and for other teams to take some of the other outstanding receiver prospects before him.

Personally, I think it'd be crazy for Jeudy to escape the top 10, but you never know, so for the sake of being thorough at this position, we may as well profile him.

Claypool is a big senior enjoying his most productive season at Notre Dame, though he doesn't have super-impressive stats overall over his career:

At 6'4, and roughly 230 pounds, what is Claypool's fit in the NFL? BGN Radio star Benjamin Solak makes a compelling case for him in a "big slot" role, similar to that of the Giants' Evan Engram or the Packers' Allen Lazard, with room to grow his role from there.

A taste of what he is as a player:

In the Eagles' offense, I see Claypool as a nice fit in something of a souped-up Trey Burton role:

While I don't think the Eagles should be screwing around with specialty players until they get some legitimate speed, I do think Claypool is an intriguing fit if the cost is right, saaaayyyyy, on Day 3.

OK, so Ole Miss and Mississippi State already played Thursday night, but since MSU doesn't have any regular season games left and they probably won't get into a bowl game, this is the last opportunity to profile Williams, and on paper, he's a decent fit for the Eagles.

Williams started at left guard in his sophomore (2017) and junior (2018) seasons, before moving to center his senior (2019) season. Whenever Jason Kelce retires, the Eagles will have to decide whether they insert someone new in at center, or if they move Isaac Seumalo there from left guard. Either way, a player with LG and C experience makes sense.

Williams is more of a rugged gamer than he is a player with impressive measurables from a size or athleticism standpoint. Here he is against pro-level players vs. Alabama last season, playing LG:

I think he's a Day 3 prospect who makes sense as a versatile interior offensive lineman, whether that's as a starter down the line, or depth.

Again, like Williams above, Coleman already played this week. Unfortunately for Coleman, he is probably best known for this bonehead play earlier this season against Kansas:

Kansas with one of the wildest finishes to a football game you'll ever see! pic.twitter.com/YDS4jsh5Yw

Eh, whatever. Coleman has done more good than harm this season, as he has a share of the NCAA lead in interceptions, with 8 of them. Additionally, he's a safety with corner experience in his background (he mostly played in the slot for Texas Tech his first three seasons there), so that will appeal to Jim Schwartz.