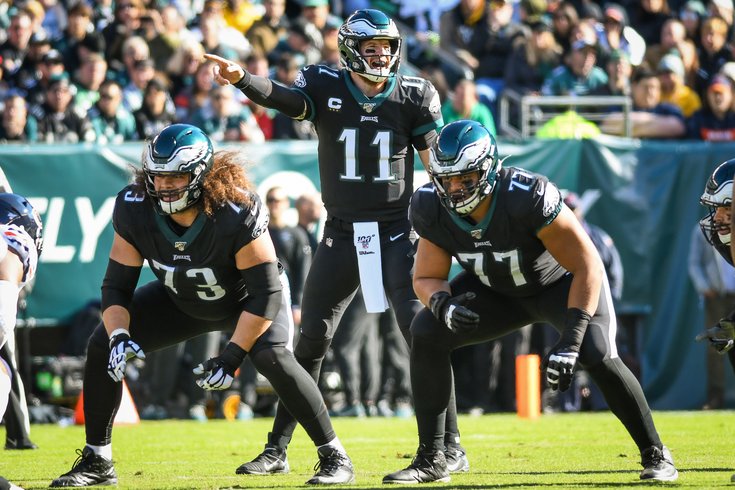 Eagles quarterback Carson Wentz adjusts the play at the line of scrimmage.

After back-to-back losses to the Patriots and Seahawks, two teams with just three combined losses on the season, the Eagles should get a break starting this week as their next three opponents, the Dolphins, Giants and Redskins, have combined for just six wins on the season.

But that's not the only bit of good news for the Birds, who will also be getting some help in the personnel department this week: Brandon Brooks and Lane Johnson are both expected to play against Miami, and Alshon Jeffery and Nelson Agholor are nearing returns as well.

Then there's the stadium, which will likely be taken over by Eagles fans on Sunday, as many people marked this game on their calendar before the season started as their annual road-trip game. Plus, Miami fans aren't the most passionate fans (no offense, it's just a city full of transplants with a ton of better things to do than watch a horrible football team). Expect the atmosphere at Hard Rock Stadium to make it feel like a home game for the Birds.

And finally, there's the pattern. This has been developing all season, and I've yet to mention it in any of my writing because I didn't want to jinx it, but I think it's safe for at least the next two weeks. You ready? The Eagles haven't won or lost more than two straight games this season. In fact, since Week 1, they've alternated two losses and two wins every single week:

Following that pattern, the Eagles will definitely win their next two games:

However, I'm not sure I like what this pattern means for their Week 15 game at Washington, but some things are just out of our control.

Anyway, now that you've seen the pattern, you can't unsee it, so it doesn't really matter what our writers predict, because the universe is telling us with 100% certainty that this is going to be an Eagles win. Still, here's everything you need to know for this weekend's game, including how we see the game playing out.

Defensively, the Dolphins have a decimated secondary, and they can't stop the run. Offensively, they can't run it, and while Ryan Fitzpatrick is at least a professional quarterback, he's not exactly Tom Brady or Russell Wilson.

In my view, when you factor in injuries, the Dolphins are the worst team in the league (yes, even worse than the winless Bengals). They are on pace for a point differential of -266 (!), which would be the third-worst in NFL history. Here is where they rank in some super-basic statistical categories:

How'd they ever win two games? It's a miracle.

When the line for this game was originally released, it was only Eagles (-7.5). Even with how the Eagles have played recently, I couldn't believe it was that low. It has since corrected itself and moved to Eagles (-9.5). I still like it anyway.

The Eagles are going to smash this team. I mean, right? They better.

The Eagles' defense has shown me enough over the last two weeks to probably win this game all by itself. Miami is awful with the football and I am expecting more than one turnover to aid the Birds in this Week 13 'battle."

Offensively the Eagles will get a few key guys back, most notably the right side of their offensive line, and that should help them establish the run game and control the clock Sunday. A decisive victory is sure to boost Philly's playoff hopes.

I could sit here and write a bunch of analysis as to why I think the Eagles are going to take care of business in Miami on Sunday, but what can I really say that isn't abundantly clear if you've watched even a few minutes of Dolphins football this season?

On top of Miami  being absolutely dreadful, the Eagles should be getting back some much-needed help on the offensive side of the ball, and that, combined with the lack of talent from their opponents, should make for a comfortable win for the Birds on Sunday. If that's not the case, then we might have some serious issues in Philly. (But don't worry, the pattern promises a win.)

The Eagles have been bad and annoying to watch, but they sure as hell are better than the Miami Dolphins.

The Eagles are bad, the Dolphins are worse. If St. Joe's Prep wasn't playing on Friday in the state semifinals, I would have put Prep as a minus-6 against the Dolphins — and I don't mean to be disrespectful to Prep. Put it this way, if the Eagles lose to this awful team, their season is over and they know it.