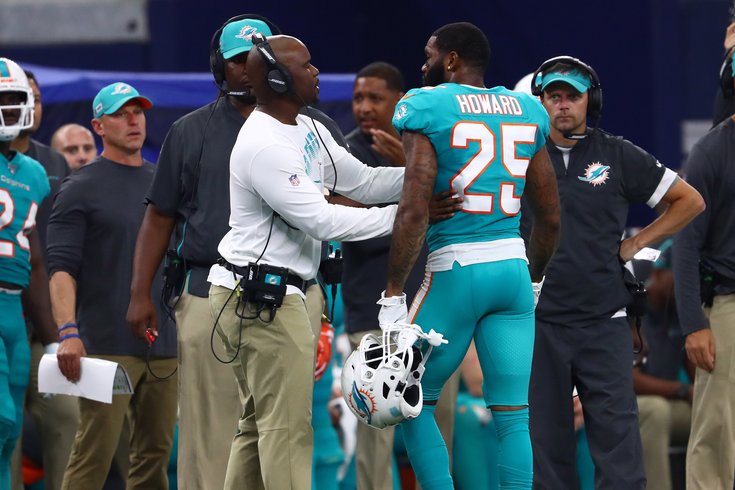 Dolphins stud CB Xavien Howard is one of many Dolphins players that the team either placed on IR or traded away.

As always, the Philadelphia Eagles have more than their share of injuries, but they're not as banged-up as the Miami Dolphins, who have a slew of starters on injured reserve.

Here is the Eagles-Dolphins injury report, with analysis.

• RB Jordan Howard (shoulder): Howard was originally listed as "questionable," but was downgraded to "out" on Saturday. The Eagles have been unwilling to hammer the run in the two games Howard has been out, instead opting for a pass-heavy attack, despite fielding often incompetent receivers.

• TE Zach Ertz (hamstring): Ertz was a surprise addition to the injury report this week. If Ertz can't go, Carson Wentz will be without his only truly reliable pass catcher.

• CB Cre'Von LeBlanc (IR): LeBlanc is out with a Lisfranc injury. He is eligible to return to the active roster at any time, but is not yet ready.

As we noted in our five matchups to watch, the Dolphins' secondary is absolutely decimated by injuries. If the Eagles can't throw on this team, they can't throw on anyone.

• CB Ken Crawley (shoulder): The Dolphins claimed Crawley off of waivers from the Saints, and he has appeared in four of their games, starting two.

• CB Xavien Howard (IR): Howard is a stud cornerback who landed on IR with a knee injury. He tied for the league lead in interceptions in 2018, with 7.

• WR Preston Williams (IR): Williams is an undrafted rookie who had 32 catches for 428 yards and 3 TDs in 8 games before he landed on IR with a torn ACL.

• S Reshad Jones (IR): Jones is a two-time Pro Bowl player who has dealt with shoulder injuries whose season is over. He'll still a decent starting safety, but he'll probably be a cap casualty this offseason.

• CB Aqib Talib (IR): Talib was already on IR when the Dolphins acquired him in a trade from the Rams. He'll be eligible to return Week 15.

• CB Bobby McCain (IR): McCain is a versatile defensive back who played on the outside and in the slot for Miami this season. He's on IR with a shoulder injury.

• CB Cordrea Tankserley (PUP): Tankersley was a third-round pick of the Dolphins who started 11 games as a rookie in 2017. In November of the 2018 season, he tore an ACL, and he remains on PUP as a result of that injury.

• WR Jakeem Grant (IR): Grant is a lightning-fast receiver and returner. As a receiver, he had 19 catches for 164 yards (8.4 YPC) and 0 TDs, before he went on IR earlier this week with an ankle injury. He also had a 101-yard kick return TD against the Bills.

• OG Danny Isidora (IR): The Dolphins traded a seventh-round pick to the Vikings for Isidora just before the start of the season, and he started the first three games for Miami (he wasn't good), before he went on IR with a foot injury. The Dolphins have since started a few different guys at RG, but the latest to play there is Shaq Calhoun, an undrafted rookie. That should be a matchup advantage in favor of the Eagles.

• DE Jonathan Ledbetter (IR): Ledbetter is an undrafted rookie who made the team and started Week 1, making 4 tackles and notching a half sack, before he went on IR with an ankle injury.

It's no secret that the Dolphins were not playing for the 2019 season in any way, as they traded off some assets for future draft picks. Here's a quick list of the notable players they dealt this season.

• LT Laremy Tunsil: Stud LT was dealt to the Texans for a couple of first round picks, and a second-round pick. Julién Davenport, who the team recently activated off of IR, is currently the starting LT for Miami (or at least he was Week 12 against the Browns).

• WR Kenny Stills: Stills was also included in the Tunsil trade. He has a stat line of 27-400-1 with the Texans this season.

• DB Minkah Fitzpatrick: The Dolphins traded Fitzpatrick to the Steelers for a first-round pick. He has a share of the NFL lead in interceptions, with 5.

• RB Kenyan Drake: The Dolphins traded Drake at the deadline to the Cardinals for a conditional sixth-round pick. With Miami this season, Drake had 47 carries for 174 yards (3.7 YPC) and 0 TDs. In three games with the Cardinals, he has 41 carries for 212 yards (5.2 YPC) and 1 TD.