Week 13 NFL picks: Rounding up the experts' predictions for Eagles vs. Dolphins 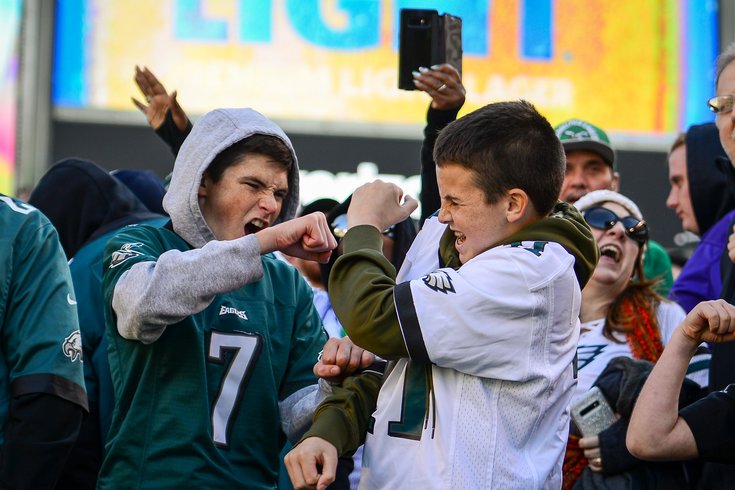 Fans during the Philadelphia Eagles game against the Chicago Bears at Lincoln Financial Field in Philadelphia on November 3, 2019.

While you were busy stuffing your face with various Thanksgiving-related pieces of deliciousness, the Eagles' playoff chances got a huge boost.

With the Cowboys loss to Buffalo Thursday, the Eagles can get a share of the NFC East with a win over the Dolphins this weekend. And if they take care of business over the next five weeks they can complete yet another improbable playoff berth.

We've already given you some matchups to watch and offered our own predictions for Eagles vs. Dolphins — and we'll have a full injury report later this afternoon. Now, as we do every week, it's time to take a look around the nation to see how various experts, both local and national, see Sunday's game playing out. And you will see as you comb through the picks, there is a good mix of that Eagles optimism amid the slew of NFL experts below...

• PhillyVoice staff: All of our writers see a decisive victory in South Florida. Here's a look at what Joe Santoliquito, who thinks it'll be an epic one-point loss, said:

The Eagles are bad, the Dolphins are worse. If St. Joe's Prep wasn't playing on Friday in the state semifinals, I would have put Prep as a minus-6 against the Dolphins — and I don't mean to be disrespectful to Prep. Put it this way, if the Eagles lose to this awful team, their season is over and they know it.

• ESPN staff: It's a clean sweep (get ready for a trend to start), with every ESPN expert picking Philly.

Lost in Carson Wentz's inability to complete open throws to sub-standard receivers in awful conditions over the last two weeks has been the sustained excellence of the Eagles' defense. With the Eagles hopeful they'll get back Lane Johnson, Alshon Jeffery, Nelson Agholor and Brandon Brooks on Sunday, the offense only needs to be competent enough for the defense to do the rest. The conditions will be friendlier in Miami, as will the Dolphins' lines on both sides of the ball. The Cowboys may still rue allowing the Eagles to hang around this NFC East slog as long as they have.

• OddsShark: Oddshark, which always seems to make an odd prediction, is projecting the Eagles to win but not to cover Sunday.

If the Eagles lose this one, they can forget about the playoffs.

The Eagles looked terrible last week against the Seahawks, but a visit to the Dolphins should be just what the doctor ordered.

The Philadelphia Eagles are now officially trying to save their season. And while Philly hasn't been right for much of the year, we all know how well-coached, experienced teams react when their backs are against the wall.

While there are some reasons to be concerned about the state of Philadelphia's offense, the defense has surrendered just 15.3 points per game since Week 8, and the Miami Dolphins' atrocious D could be just what the doctor ordered for Carson Wentz and Co.

Considering that Philly has already won by seven-plus points in Green Bay and Buffalo, all of our experts are willing to lay nine points with the Eagles in Miami.

"At this point, it's fair to question whether Wentz's struggles are being caused by all Philly's injuries at receiver or are just being exacerbated by them," Davenport said. "His turnover-filled clunker against the Seattle Seahawks was a big fat yam of a game (yams are gross…come at me, bro). But the Dolphins can't run the ball a lick, and the defense is awful. Never mind that Miami is back to losing by sizable margins again after showing some fight for a month or so."

Yeah, the Dolphins covered in five consecutive weeks after a historically bad start, but their completely gutted roster has caught up with them again. They enter this game coming off back-to-back three-score losses in which they surrendered a combined 78 points to the Bills and Browns—neither of whom are offensive juggernauts.

Look for Wentz to benefit from the fact that his supporting cast is slowly getting healthier versus a bad team.

• Sheil Kapadia, The Athletic: Sheil Kapadia, the former Eagles beat writer turned national NFL writer, is now making picks against the spread for every game over at The Athletic. This week, he's taking the Eagles even as 9.5 point favorites:

The Eagles lost two consecutive games — to the Patriots and the Seahawks — in which they scored two touchdowns on 26 offensive drives. The good news? They have the easiest remaining schedule in the NFL. They’re 5-6, and Football Outsiders still gives them a 26 percent chance at making the playoffs. The Dolphins currently are in line for the No. 4 overall pick, along with whatever picks the Steelers and Texans end up netting. The Eagles have covered just four times in 11 games, but their best wins (at Green Bay, at Buffalo) have come on the road. I think their defensive line dominates in this one.

• SBNation staff: So apparently SB Nation has a puppy making picks. It picked the Dolphins. Everyone else went Philly for Week 13.

• Bleeding Green Nation staff: Not surprisingly, our friends at BGN all went with green to succeed this week.

• Inquirer.com: Everyone at the Inquirer sees the Eagles winning by a large margin. Here's a less than optimistic prediction from Les Bowen, who predicts a 21-9 Philly victory:

Do I think the Eagles could possibly lose? Sure. The way this offense is playing lately — who knows what injury intrigue or other manner of unforeseen drama can intrude this week? I have to think, though, that Jim Schwartz’s improving defense will be able to take care of business well enough to keep a ridiculous embarrassment from occurring. The offense, I’m less certain about that, especially if Zach Ertz (hamstring) doesn’t play. I think Jay Ajayi would like to have a chance to show the Dolphins something, after they traded him to the Eagles in 2017. I’d like to see him get the chance. And I’d like to see Carson Wentz get the city off his back.

• NJ.com staff: All five NJ.com writers expect the Eagles to win Sunday, but former Birds beat writer Matt Lombardo thinks it will be anything but a breeze, picking them to win by a single point.

Has there been a more tumultuous football season in Philadelphia in recent memory? If Carson Wentz is unable to play this will be much closer than many pundits believe. Heck, the way the Eagles’ wide receiving corps has performed in recent weeks, this game could give the Delaware Valley more than its share of post-Thanksgiving agita.

This is the first of a handful of games that present the Eagles, despite their struggles of late, a solid chance to stay in the NFC East and wild-card races. They draw the hapless Dolphins ahead of games against the equally hapless Giants and Redskins before that big Cowboys game in Week 16. It goes without saying that Philadelphia can't afford to slip in Miami, and it won't.

The Eagles are big favorites here because of the way their defense is playing; certainly not because of their offense and a beat-up Carson Wentz, who is down to his two tight ends as his most reliable weapons. The secondary is improved with healthy bodies, and the pass rush is coming along with some opportune blitzing. The Dolphins will suffer from their lack of pop around Ryan Fitzpatrick, and Philadelphia will go into grind mode to take this on the road.