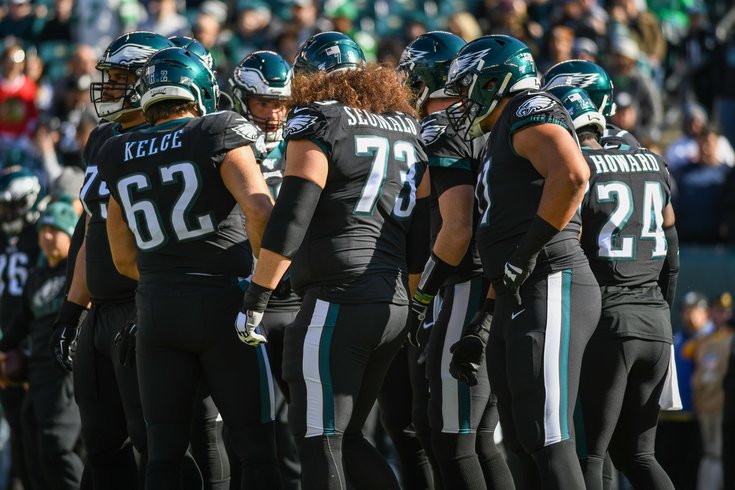 The Philadelphia Eagles offense in the huddle during a recent game.

The Eagles haven't fared too well against the Seahawks in recent years, losing four straight and six of their last seven against Seattle dating back to 2005. Worse yet, they haven't beaten the Seahawks in Philly since 1989, a streak they'll be looking to end on Sunday when they welcome Russell Wilson and Co. into Lincoln Financial Field.

The good news for the Birds is that despite their loss last week, they're still only a game behind Dallas for first place in the NFC East, and the Cowboys have a tough task themselves this weekend with a trip to Foxboro on tap, so a win over the Seahawks could very well move them back into a tie (although Dallas currently holds the tiebreaker).

The bad news is that there's still a chance the Eagles could be without a few key playmakers on offense, as Alshon Jeffery and Jordan Howard remained limited participants at practice on Wednesday, not to mention Nelson Agholor, who didn't practice at all. Lane Johnson didn't suit up this week to practice either as he remains in the concussion protocol, something that could come back to haunt the Eagles against Jadeveon Clowney and the Seattle defensive front.

Despite those injuries — not to mention the fact that Russell Wilson has never lost to the Eagles — Philly opened the week as a three-point favorite at some books. And although that number's come down a bit at most places, the Birds are still somehow favored in this one. Go figure.

Can the Eagles bounce back from their loss to the Patriots with a win over Seattle? Here's everything you need to know for this weekend's game, including how our writers see the game playing out.

Somehow when this line opened, the Eagles were 3.5-point favorites in some places. Heavy action on the Seahawks has since forced a correction on that, as the line has dropped to 1.5 points. And you know what? I still think it's a bargain to take the Seahawks.

I don't know how anyone can look at these two teams and come to the conclusion that the Eagles are better. Certainly, the Eagles have some things going for them, notably their improved pass rush and secondary. But ultimately, I just don't know how you get past the complete lack of competency from the wide receivers, even if Alshon Jeffery returns to the field on Sunday. And oh by the way, if Lane Johnson is unable to play, that's kind of a big deal.

Normally, I like picking teams that I think will win in the trenches, instead of skewing toward skill position players as most do. In my view, the Eagles have a decided advantage along the lines. However, the Seahawks have arguably the best player in football at the moment in Russell Wilson, and I think the Seahawks are far better equipped to make more big plays.

The defensive line has been great and the secondary has taken a big step forward — I actually believe in the defense this week. With the Seahawks coming east and playing early, there should be a distinct home field advantage for the Eagles.

There is a lot contingent — offensively — on the health of the unit hitting the field in Week 12, but I would make the argument that had the Birds had Lane Johnson, Alshon Jeffery and Jordan Howard against the Patriots they would have won. If that trio plays, or even two of the three, I think the offense can put up enough points.

The Seahawks are the better team in this one, especially if the Eagles continue to be without a healthy Alshon Jeffery and Jordan Howard, particularly the latter. We already know about the Eagles' receivers struggles this season as they've been well documented, but the one way the Eagles have been able to offset that has been by throwing a dangerous rushing attack at their opponents and keeping defenses honest. Obviously, Miles Sanders is still a threat, but he has been at his best as a complement to Howard — and we still don't know what to expect from the recently-signed Jay Ajayi. The Birds could struggle on offense again, although it shouldn't be nearly as bad as it was against the Patriots. In other words, this isn't the Legion of Boom Seahawks defense you remember, but with this Eagles offense, you never know.

On the other side, you have an Eagles defense that has certainly looked better in recent weeks, but they'll be facing their toughest test in weeks against this Seattle offense. In addition to Russell Wilson, they'll have to deal with wideouts Tyler Lockett and D.K. Metcalf, and a running back in Chris Carson who is averaging more than 100 total yards per game (85 of them on the ground). They'll need another stellar performance on Sunday if they hope to knock off Seattle. Unfortunately, I just don't see that happening.

Seattle’s only two losses of the season came at the hands of two good 8-2 teams, one of whom (the Baltimore Ravens) has a legitimate MVP candidate at quarterback. In a way, they are actually a reminder of who the Eagles could have been instead of who they are, with guys like Clowney and D.K. Metcalf constantly coming up as marks against Howie Roseman in Eagles conversations this season.

Seattle is coming off of a bye, so it’s unfair to expect a repeat performance for the defense after a great New England game. Ultimately this is going to come down to whether the offense can put up points. Does anyone feel confident they’re capable of doing that? Seattle isn’t a defensive juggernaut by any means and the Eagles should be able to move the ball, but they produce timely turnovers and have a much better offense than Philly to boot.

This team still won’t be completely dead if they lose, but they would need a massive week-to-week turnaround to pull this game out.

This is a little baffling. Entering the week, the Seahawks were a plus-2.5, and, in my opinion, actually a better team right now than the New England Patriots, who were favored to beat the Eagles coming off a horrible loss to Baltimore. The Seahawks are certainly getting better quarterback play in MVP candidate Russell Wilson than what Tom Brady displayed last week. I’m 7-3 this year, and make it 8-3 after Seattle, which is 5-0 on the road, squashes a slow, methodical offense that’s become increasingly tough to watch.

I had predicted this game to be an L from day one and after the offensive performance against the Patriots, I am still sticking with this one not being a win for the Eagles in the battle of the Birds.

With Seattle coming off of the bye, they will be fresh and focused. The Seahawks have put up at least 20 points in their eight wins this season. Even if the defense is able to pull off another game like they did against the Patriots to hold off Russell Wilson, I’m not sure how the Eagles offense with all of the injuries is going to be able to put up enough points offensively to ultimately win the game.