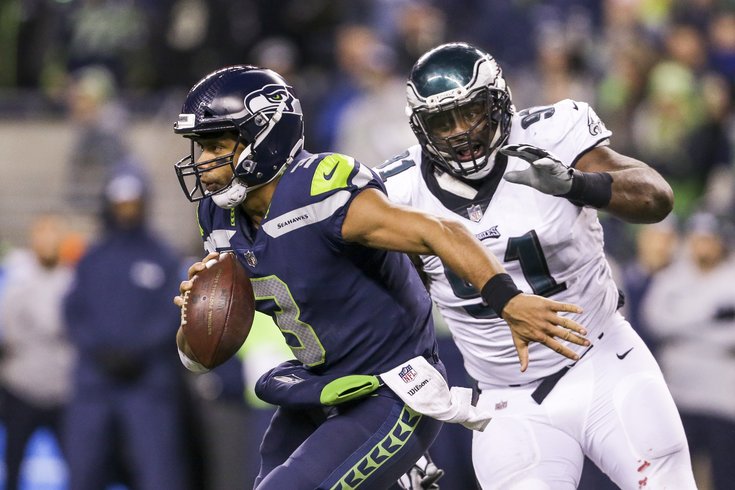 For the gambling degenerates, here are my Week 12 NFL picks. To note, the team logos indicate who I think will win the game, not cover the spread. At the end of the picks, I'll note a few teams that I like based on the spread.

Colts at Texans (-4): Jacoby Brissett is 4-0 over his career against the Texans, with 7 TDs, 0 INTS, and a QB rating of 107.2. He'll have no shortage of confidence heading into this matchup.

Seahawks at Eagles (-1.5): Somehow when this line opened, the Eagles were 3.5-point favorites in some places. Heavy action on the Seahawks has since forced a correction on that, as the line has dropped to 1.5 points. And you know what? I still think it's a bargain to take the Seahawks.

I don't know how anyone can look at these two teams and come to the conclusion that the Eagles are better. Certainly, the Eagles have some things going for them, notably their improved pass rush and secondary. But ultimately, I just don't know how you get past the complete lack of competency from the wide receivers, even if Alshon Jeffery returns to the field on Sunday. And oh by the way, if Lane Johnson is unable to play, that's kind of a big deal.

Normally, I like picking teams that I think will win in the trenches, instead of skewing toward skill position players as most do. In my view, the Eagles have a decided advantage along the lines. However, the Seahawks have arguably the best player in football at the moment in Russell Wilson, and I think the Seahawks are far better equipped to make more big plays.

Buccaneers at Falcons (-4.5): After a 1-7 start, the Falcons have blown out a pair of division rivals (Saints and Panthers) on the road the last two weeks by a combined score of 55-12. They try to go for the NFC South trifecta this week.

I sense a "more harm than good" 2011 Eagles-like late-season head coach job-saving surge from the Falcons.

Broncos at Bills (-4): OK, so the Broncos are 3-7, their season is over, they put Joe Flacco on IR, and they elevated 2016 sixth-round pick Brandon Allen as the starter, instead of Drew Lock? Uh, OK. Lock was a second-round pick of the Broncos in the 2019 NFL Draft (42nd overall), and they don't want to see what he can do?

“I don’t think it’s vitally important. I can remember back in the strike year. Some of you weren’t born then. Then another year—might not have been the strike year and a few years later. Anyway, we played a young quarterback in New Orleans for about three games and he did pretty damn good. Then Bobby Hebert held out the next year. He was part of that class action lawsuit that the players won free agency with, missed a whole season. We took the attitude, the franchise, that we got this guy to play pretty good for three games. Didn’t work out that way. I think with a young guy in limited reps it can be good. You can get a false positive. You can get a false negative. You need a whole body of work to—and that body of work includes offseason and training camp buildup. I’m not putting any limits on him if he does get in there, but I would be reluctant to make final conclusions.”

So, Vic, maybe you just play Lock, start to get a sense of what he is, but maybe also keep it in your mind that it's a small sample size? I'm not sure exactly how keeping him on the bench is helpful in any way.

Anyway, Allen probably gives them a better chance to win in this game, but who cares?

And Jones has only started eight games. The Bears' offense is pathetic, but I like their chances of forcing some turnovers in this matchup.

Steelers (-6.5) at Bengals: Let's go ahead and update the Bengals' chances of winning a game this year, via ESPN's Football Power Index:

Dolphins at Browns (-10.5): If there was any concern that the Dolphins are suddenly a good team after they won two games -- and thus a potential pitfall for the Eagles next week -- please note that they are 10.5-point underdogs to a 4-6 team that is now also missing its best player on defense.

Panthers at Saints (-9.5): The Panthers are done, and Kyle Allen has thrown three TDs vs. nine INTs in his last four games (60.3 QB rating). The Saints should roll this team.

Raiders (-2.5) at Jets: The Jets have scored 34 points in each of their last 2 games! Hang on, let me see who they played. Oh, the Giants and Washington.

Really? My club level seat was only $27. This shirt is $35 pic.twitter.com/ZWVFkowGM1

Washington has another HUGE matchup this week against the 3-6-1 Lions.

Jaguars at Titans (-3): I wish Nick Foles the best, but it's probably better that he got smoked by the Colts last Sunday, or radio call-in morons would have been unbearable all week.

Cowboys at Patri*ts (-6.5): The Cowboys have a game seemingly every year in which they beat some perceived great team, and then everyone talks about them as a Super Bowl frontrunner for a few weeks, until they lose to some other crap team. This will be that big win this year. #Analysis.

Packers at 49ers (-3.5): How many prime time, late-season, playoff-shaping, huge games has Aaron Rodgers played in his career? A lot, probably?

The Niners remind me a little of the 2008 Titans, who started off 10-0, holding their opponents to 13.1 points per game while racking up a lot of sacks, and running it more than they threw it on offense because they didn't have a top-tier quarterback. That team went 3-3 down the stretch and were one-and-done in the playoffs.

As we noted in our hierarchy this week, the rest of the way the Niners will face two former league MVPs in Aaron Rodgers and Matt Ryan, the all-time passing yards leader in Drew Brees, and the No. 1 and No. 2 MVP contenders in 2019 (in whatever order you have them) in Russell Wilson and Lamar Jackson. Every single quarterback on their schedule the rest of the way, with the exception of the 22-year-old Jackson, has played in a Super Bowl.

We'll see if they're frauds over the next month and a half.

Ravens (-3) at Rams: For as bad as they have looked at times this season, the Rams are 6-4, and their backs are against the wall, which makes them dangerous, but the Ravens just look really good at the moment behind the electric Lamar Jackson.