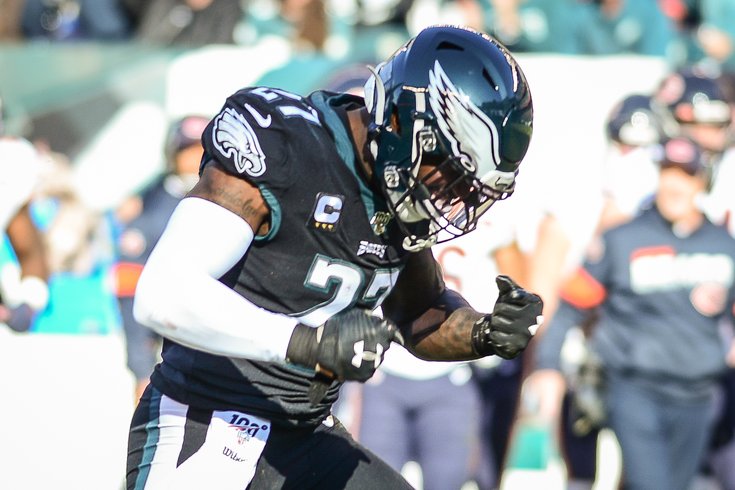 On Sunday afternoon, the Eagles will face off against the Patriots for the first time since beating New England back in February of 2018 to claim the first Super Bowl title in franchise history.

Needless to say, the stakes in this one won't be nearly as high, but that doesn't mean this game isn't huge for the Eagles, who are looking to pick up their third straight win and improve to 6-4 on the season. On the other hand, the Patriots, who are also coming off a bye week, are playing for the first time since suffering their only loss of the season at the hands of the Baltimore Ravens.

Both teams will look quite different than the ones that squared off in Super Bowl LII. Although the coaches remain unchanged, Carson Wentz (and not Nick Foles) will be behind center for the Birds on Sunday, marking the Eagles' franchise quarterback's first game against Patriots. Meanwhile, for Tom Brady, this will be his seventh matchup against the Eagles since 2003, and Wentz will be the sixth different quarterback he's faced. In fact, the last time these teams met in the regular season, it was Sam Bradford at quarterback with Chip Kelly calling the plays — and he actually pulled off the huge upset. Of course, less than a month later, Kelly was fired, and Bradford was traded the following year before the regular season even began.

But enough about the past...

Already without DeSean Jackson, who underwent abdominal surgery last week, the Eagles could also be without Alshon Jeffery (ankle), who missed practice for the second straight day on Thursday. If Jeffery can't play, that would leave the Birds with a wide receiver group composed of Nelson Agholor, recently-acquired Jordan Matthews, J.J. Arcega-Whiteside and Mack Hollins to go up against the Patriots' top-ranked defense. Not ideal.

The Eagles will likely rely on their ground game as well as their talented tight ends to move the ball against New England, but given Bill Belichick's ability to take away what your team is best at, it's nearly impossible to beat the Patriots if you're too one-dimensional. And that likely means the receivers will need to play a role in this game if the Birds hope to come away with the win.

Can the Eagles pull off another upset of the Patriots? Here's everything you need to know for this weekend's game, including how our writers see the game playing out.

When the line for this game first came out, I was very surprised that it was only 3.5 points. Once I dug into the Patri*ts a bit, however, I came away far less impressed than I would have imagined for a team with a +172 point differential. They are obviously very good, but they are decidedly not some kind of juggernaut. There are holes.

The Eagles, in my view, have a significant advantage in the trenches on both sides of the ball, so I don't see this matchup becoming a blowout, like so many of the Patri*ts' other games this season. If the Birds can get their ground game going against the Patri*ts' suspect run defense, they can shorten the game, and help keep it out of the hands of their abysmal receiving corps.

Ultimately, it's going to be difficult for the Eagles to score points, especially if Alshon Jeffery (ankle) is out. Even if Jeffery hasn't been good this season, he at least might draw the assignment of Stephon Gilmore. Without Jeffery, or even if Jeffery plays but isn't 100 percent, the Pats will/should just deploy Gilmore elsewhere, perhaps on Zach Ertz.

I see a low scoring game, with the Patri*ts handing the Eagles a frustrating loss. The guess here is that T*m Brady won't skulk off the field without shaking hands like a crybaby this time, if so.

The Eagles receiving corps really worries me. With Alshon Jeffery yet to practice this week, the trio of Nelson Agholor/Mack Hollins/J.J. Arcega-Whiteside isn’t going to give the Patriots' historically good defense too many fits. They’ll be able to focus in on Zach Ertz and handling the Eagles' potent running game. I don’t have a lot of confidence in Philly scoring many points Sunday. Still, the defense has been better and if the pass rush can give Tom Brady trouble, the Birds can certainly can make it a game. I predict the Patriots sneak out of Philadelphia with a low scoring win.

Sure, the Patriots haven't beaten up on a ton of good teams this year, but are we really sure the Eagles are a good team? Their record suggests they're at least slightly above average, but Philly doesn't have much in terms of quality wins either, and certainly has its fair share of bad losses. It's really hard to get a read on this team, but with them going against a Patriots defense that was holding opponents to just 7.6 points per game prior to their loss to the Ravens, it's really difficult to foresee their already limited offense getting a ton going in this one.

And then there's the Eagles' defense against this Patriots offense. Because, while their defense gets a ton of credit for being first in the league in points allowed, their offense has actually been putting up plenty of points on their own, with them currently second in the league in points scored. Sure, there's no Gronk anymore and Tom Brady is another year older, but that doesn't mean he can't still carve up a secondary. And Mohamed Sanu has now had plenty of time to work his way into that Patriots system.

The Eagles can certainly win this game — don't forget, I was one of the few people to pick them over the Packers — but it will take a near-flawless effort on both sides of the ball. And the Eagles haven't shown that they can play mistake-free football for 60 minutes. Sorry, I just don't see it happening.

I haven’t seen much to suggest the Eagles are anything but a mediocre football team this year. The Eagles might have homefield on their side this week, but they’re up against one of the league’s elite teams, who also happens to be coming off of a bye week of their own after suffering their first loss of the year. If the history of Brady and Belichick is a guide, they will come out ready to rip this week.

Would love to be proven wrong, but I’m not going to do the mental gymnastics it would take to talk myself into this one.

I just can't see how this version of the Eagles beats a pissed-off Tom Brady and Bill Belichick, who are coming off a bye week, their first loss of the season and an Eagles team I'm sure some of them still harbor resentment against for Super Bowl LII. Much has changed since then, for the Eagles, who are struggling to find an identity deep into November. Not much has changed with the Patriots. They're still winning Super Bowls. They still have the best coach (Belichick) and best QB (Brady) to ever play the game. Belichick will focus on taking out Zach Ertz, give Carson Wentz different pre-snap looks and force an offense with little to no speed into mistakes.

Ahh, the big rematch we’ve all been waiting for! Both the Eagles and the Pats are coming off of their byes, so both teams will be fresh. Unfortunately, the team that won Super Bowl LII is not the team that’ll be taking on Tom Brady on Sunday at the Linc. I’m relying on a heavy defensive game from the Eagles to keep the Pats offense off the field. If Alshon doesn’t play, the offense is going to have to flow through Zach Ertz and Dallas Goedert. Mike Groh and Doug Pederson are going to have to come up with something special in Philly (see what I did there?) to stop the Pats from shutting them down. Jordan Matthews and Nelson Agholor are also going to have to execute at a near perfect level to ensure the Birds stay strong in the game. This team can’t afford drops this week. Despite the glaring flaws, I’m feeling a career game from Carson to set the tone for the rest of the season.