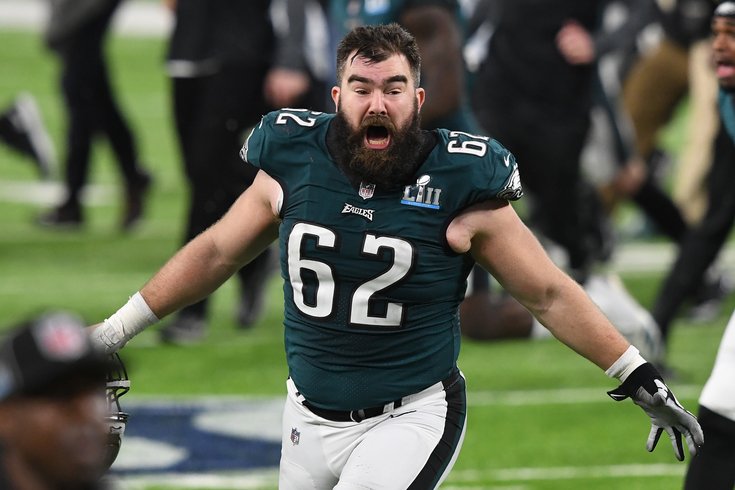 Jason Kelce and the Eagles' offensive line must dominate in the run game, like they did in the Super Bowl.

The Philadelphia Eagles will return from their bye this Sunday to face their conquered Super Bowl foe, the New England Patriots, who are also coming off their bye, and perhaps angry after a bad loss to the Baltimore Ravens.

In addition to whatever cheating measures the Patri*ts have planned for this week, here are five matchups to watch.

1) The Eagles' rushing offense vs. the Patriots' run defense

Taking a look at ESPN's win probability charts, seven of the Patriots' nine games were blowouts, and already basically over by halftime.

As a result, the Pats have only faced 189 rushing attempts this season or, 21.0 per game, the second-fewest in the NFL.

They're 11th in run defense, which sounds better than it is, seeing as teams have abandoned the run against them quickly. In the two games that were actually competitive, the Patriots did not do a good job stopping the run:

The Eagles' run game — or more specifically, the Eagles' run-blocking offensive line — has been spectacular at times this season, opening up gaping holes for Jordan Howard and Miles Sanders to run through. And oh by the way, it was the offensive line that dominated the Patriots in the Super Bowl, largely because they were all in sync, as they've been for the most part this season.

The Eagles will want to employ old school football in this matchup, staying on schedule, and shortening the game by controlling time of possession. I hate to be the "establish the run" guy, but that's their best chance of beating the Pats.

The 2019 Patriots have allowed just three TD passes, and they have 19 interceptions, which is absolutely insane in today's NFL. Of course, they've done that damage against a (mostly) less than awesome group of quarterbacks:

Still, three TDs vs. 19 INTs is incredibly impressive no matter who they've faced.

One thing Carson Wentz has done an excellent job of this season has been ball security, and he hasn't gotten enough credit for it. On the season, he has just 4 INTs and 2 lost fumbles.

A quick look at all four INTs:

1) Wentz evades the unblocked blitzing slot corner, escapes the pocket, and throws while getting hit, hoping his receiver makes a play for him (lol) on 3rd and 8. It winds up being about the same result as an incompletion and a good punt.

2) The Eagles are running a scissor concept here with Ertz and Mack Hollins, and it looks like Wentz tries to hit Ertz deep, but the football suddenly gains an extra three pounds before he throws it. This was an odd throw, and easily Wentz's worst pick of the season.

3) Down three scores with under six minutes to play, Wentz makes a bad decision on a pass he might not normally try to force in without a huge deficit.

4) And then again, facing a three-score deficit in the fourth quarter against Dallas, Wentz makes a bad decision trying to force one in to Jeffery.

So, again, Wentz only has four picks all season, while the Pats have four picks in a single game three times this season. He must continue to keep the turnover sheet clean against a historically opportunistic defense.

3) Someone other than Alshon Jeffery and Zach Ertz vs. the Patriots' pass defense

The Patriots' passing defense game plan shouldn't be too difficult to figure out. Bill Belichick is going to attempt to take away Zach Ertz first and foremost. The guess here is that Ertz will see a lot of double teams, while Belichick will ask Stephon Gilmore, a top 3 NFL corner, to shut down Alshon Jeffery on his own, like he (eventually) did in the Super Bowl, after Jeffery had already done his damage against Eric Rowe.

This would be a good time for Dallas Goedert to step up in the passing game, though it is worth noting that the Patriots have allowed the third-fewest receiving yards to tight ends in the NFL this year. Through nine games, they've allowed just 26 receptions, 288 yards, and two TDs to opposing tight ends.

At some point, the Eagles are going to need Nelson Agholor or Jordan Matthews to at least keep the Patriots' defense honest. We'll see.

4) The Eagles' pass rush vs. the Pats' hobbled offensive line

If we're to pick an area where the Pats are a little vulnerable offensively, it's along their offensive line, where they are missing two starters.

After getting off to a slow start this season, the Eagles' pass rush has been much better, and they should be helped further by the bye week, as nicked up guys like Fletcher Cox and Derek Barnett will have a chance to heal up.

When the Eagles get into obvious passing downs, the Eagles could have as many as four DEs — Barnett, Brandon Graham, Josh Sweat, and hybrid DE/LB Genard Avery — all in the game at the same time, along with Cox.

This game might be an interesting opportunity to stand up Avery in a joker role in the A gaps over Karras, and force the Pats to give extra help there.

In the Super Bowl, before Brandon Graham was able to make the most important defensive play in Eagles history, the Eagles' defense got owned schematically all game by the Patriots. According to Jim Schwartz, a number of the players are different, but the scheme is basically the same.

"Last week we were watching our Super Bowl game, and a lot of their scheme stuff has stayed the same, obviously their quarterback has stayed the same, but there has been significant [roster] turnover," he said. "Edelman wasn't playing in that game even though he's been a long-time member of their team. It's a little bit different when 87 [Gronk] is not out there. That looks a little bit different for them.

"But they have some continuity at the running back position. They have added Sony Michel in there and he fills a good role for them. When it's all said and done, they have been a winning team, and regardless of who has been out there. So that's what the challenge is. The challenge is being able to match-up, being able to tackle, be able to play the run, be able to play the pass and find a way to come out with the win. That's our job this week."

We'll see if Schwartz can cook up something more effective this time around.