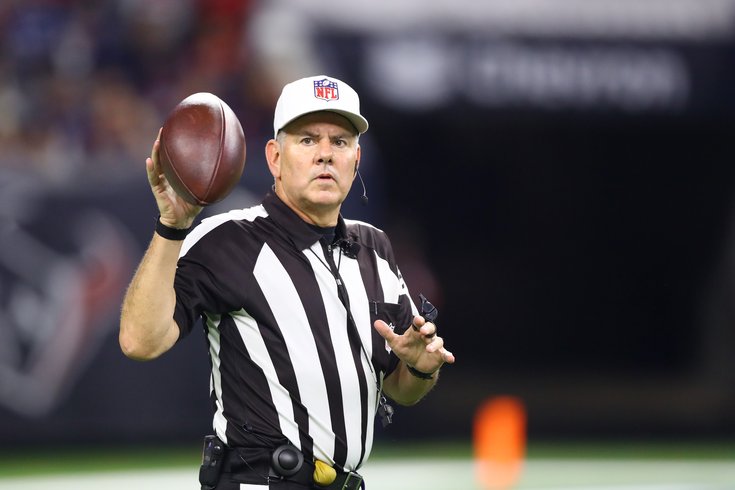 The NFL has assigned the crew of Bill Vinovich, a referee who wears No. 52, to officiate Sunday's game between the Eagles and the Patriots.

The Philadelphia Eagles play a pretty big football game on Sunday, a rematch of the franchise's first-ever Super Bowl win against the New England Patriots. As you might recall, the Eagles' legendarily good Super Bowl victory came in the 52nd edition of the big game.

Because sports fans have long memories, Eagles fans will happily remind you that their team won Super Bowl 52 (also known as LII), and revel in most sports-related mentions of the number 52.

So here's something that, after nine days without Eagles football and with five more to survive, should pique some interest: the NFL has assigned the crew of Bill Vinovich, the referee who wears No. 52, to officiate Sunday's game between the Eagles and the Patriots:

Bill Vinovich has been assigned as referee for Sunday's Patriots-Eagles game. Vinovich, who is No. 52 in your officiating program, worked the Patriots-Dolphins game in Week 2. His crew entered last weekend's games averaging the fewest penalties called per game.

I'm sure that's totally a coincidence!

For reference, the NFL has 17 officiating crews, each featuring seven referees, and it also has three "swing officials", which means there are a total of 122 referees with unique numbers across the league. And this much-ballyhooed game just happens to get a perfect case of numerology.

Will Patriots quarterback Tom Brady suffer flashbacks to his 2018 Super Bowl loss any time he sees Vinovich's number on Sunday? Who's to say? It sure seems like he still has that one game on his mind.

And, for the record, OddsShark places the game's over-under at 46 as of Tuesday afternoon. If I were a betting man, I'd take the over. I'm predicting a final score of 28-24, Eagles, for a nice, round total of 52 points.