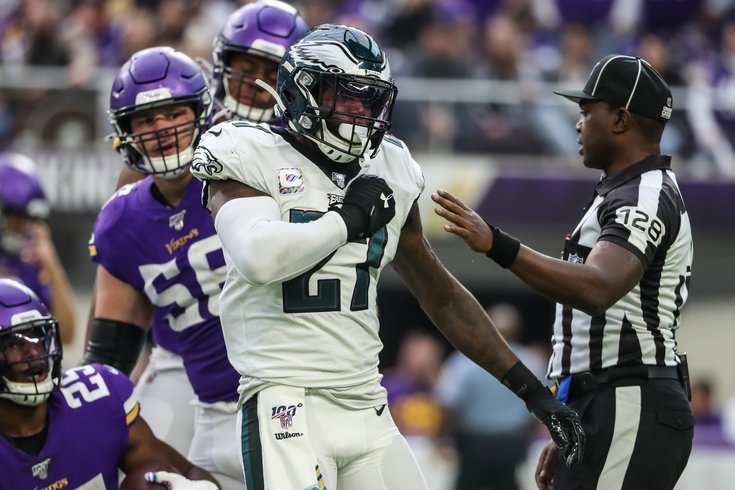 Every Monday this season, we have taken a look at how the Philadelphia Eagles' snaps have been distributed, with analysis, for each individual game. Since the Birds didn't have a game this week, perhaps this is an opportune time to take a look at the season as whole through the team's first nine games.

Analysis: Heading into the start of the season, the Eagles' No. 1 concern, by far, was whether or not Carson Wentz could stay healthy through a 16-game season. With the exception of a weird circumstance in Atlanta which the league radioed to the Eagles bench that Wentz needed to be tested for a concussion -- and a few missed snaps in preservation mode late in blowouts -- Wentz has not come off the field.

Analysis: Let's first start with the positive. It is amazing how quickly Brandon Brooks has come back from a torn Achilles in the divisional round of the playoffs a season ago, and the level at which he is playing. If he continues to play the rest of this season the way he has played through the first nine games, he should be a First-Team All-Pro.

On the negative side, Jason Peters is predictably injured, again. In his place, Andre Dillard has improved each week, and had a very good game Week 9 against the Bears. He should be the starting LT going forward, regardless of Peters' availability.

Doug Pederson was asked about that upcoming decision.

"I think moving forward, something we'll evaluate this week, I've been really impressed with Andre, number one," he said. "Gosh, he had another good game yesterday with these two pass rushers, Khalil [Mack] and Leonard [Floyd], he played well. I do think when JP is healthy and comes back, I still think it's JP's position moving forward."

I don't think Doug actually means that. We'll see when that time comes.

Analysis: There's no reasonable argument on why Darren Sproles should be getting snaps over Miles Sanders, who is a better runner, more explosive, a better receiver, and has been surprisingly good in pass protection.

Jordan Howard was a rare veteran acquisition hit this offseason among a slew of misses. He has proven to be a solid runner and a good team guy.

Meanwhile, we've already beaten Nelson Agholor's struggles to death, and the complete lack of production from Mack Hollins and J.J. Arcega-Whiteside. Jordan Matthews shouldn't be mistaken for an answer to the Eagles' wide receiver problems, but he'll be better than Hollins and Arcega-Whiteside.

Analysis: For a team that has two tight ends each playing 70 percent of the snaps in recent weeks, it seems crazy to me that the Eagles only carry two, and it feels like the Atlanta game won't be the only time that dynamic really hurts them this season.

If Zach Ertz or Dallas Goedert go down at any point in a game going forward, the Eagles are going to have to throw out a substantial part of their playbook.

At defensive tackle, once Malik Jackson went down, it's been an injury-weakened version of Fletcher Cox (though he seems to be getting back to his old self) and a bunch of replacement-level players.

The defensive ends have largely played pretty well, in my view, at least after the first quarter of the season. They're perhaps being a little under-appreciated at the moment. I think what you'll see a bit of down the stretch is that there will be times in which four of the above DEs -- Brandon Graham, Derek Barnett, Josh Sweat, and Avery Genard -- could all be on the field at the same time on obvious passing downs, with Graham playing DT next to Cox, and Genard playing something of a joker role in which he can either blitz, drop into a short zone, or spy the quarterback.

Analysis: Zach Brown and L.J. Fort were both cut during the season. Brown was a starter, and Fort has become a solid contributor in Baltimore.

Meanwhile, Nigel Bradham hasn't been healthy (and also not the same Nigel Bradham from 2017), Nate Gerry has come along a bit but isn't an ideal starter, and Kamu Grugier-Hill has not made the big jump that many of us thought he might.

Analysis: He's not having a Pro Bowl type of season, but there's no questioning Malcolm Jenkins' heart. He hasn't missed a snap since 2017. Rodney McLeod's availability was in question during training camp, but he has played all but one snap this season. Andrew Sendejo was rightfully waived in favor of a 2020 (projected) fourth-round compensatory pick.

As for the cornerbacks, the starters going forward will be Jalen Mills and Ronald Darby, with Avonte Maddox in the slot. Rasul Douglas is back on the bench, though he'd be the first guy back on the field in most injury scenarios. We'll see how Cre'Von LeBlanc fits in if he ever comes off of injured reserve. Sidney Jones has become a healthy scratch, a bad blow for his career.