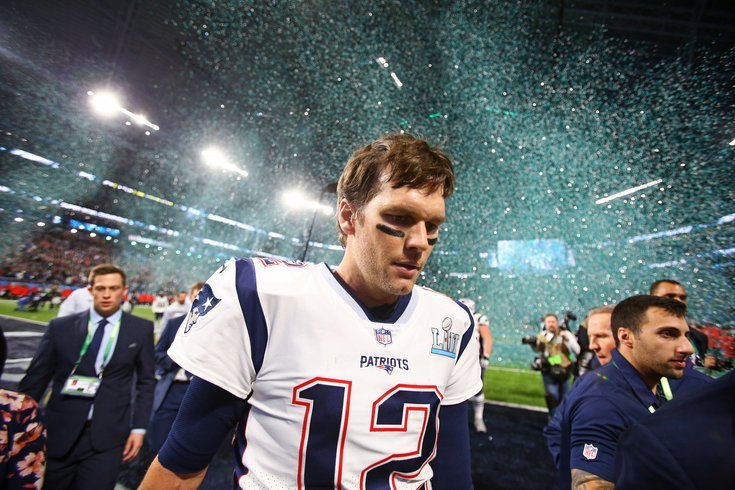 New England Patriots quarterback Tom Brady said the team's loss to the Philadelphia Eagles in Super Bowl LII still eats at him. Brady spoke during a weekly radio appearance on WEEI heading into a rematch this weekend at Lincoln Financial Field.

The Philadelphia Eagles are tied for first place in the NFC East and will return from their bye week with a matchup on Sunday against the 8-1 New England Patriots.

It's the first time these teams will meet in the regular season since the Eagles' 41-33 win in Super Bowl LII. The memories will always be vivid and fresh, but the euphoria is starting to feel a bit distant.

What better way to rekindle those feelings than hearing Patriots quarterback Tom Brady admit he's still tormented by what happened in Minneapolis? Despite winning another Super Bowl last season, Brady said Monday he still hasn't gotten past the loss.

"How long does it take you to get over a loss like that?" WEEI's Greg Hill asked Brady during his weekly radio appearance.

"You assume I'm over it? Come on now," Brady said. "That's a lot of mental scar tissue from that year. That was a tough game. In a lot of ways, we learned from that year, and we came back stronger the next year. We won the Super Bowl in '18. I think everything is a matter of perspective, and when you play in that game and you play great teams, you're not going to win them all."

Barely a month after the Eagles won the Super Bowl, Brady said on his "Tom vs. Time" docu-series that Brandon Graham's strip sack was haunting him. He couldn't get that fumble out of his mind, even as his trick play drop earlier in the game became the subject of endless memes.

On Monday, Brady admitted the Eagles were the rightful winners of that game.

"This is not the Harlem Globetrotters vs. the Washington Generals. This is all about tough competition against the best teams. They deserved it that year, and now a couple years later we get a chance to play the organization again," Brady said. "We've had a lot changes, they've had a lot of changes. It's totally different circumstances. Huge game for us. Big game for them. The better team is going to win."

The Eagles will need a strong second half of the season to make their way into the playoffs. Nothing would propel that run better than a hard-fought home victory over Brady and Bill Belichick, who opened the week as 3.5-point favorites in Philadelphia. And that's just where the Eagles want them to be.