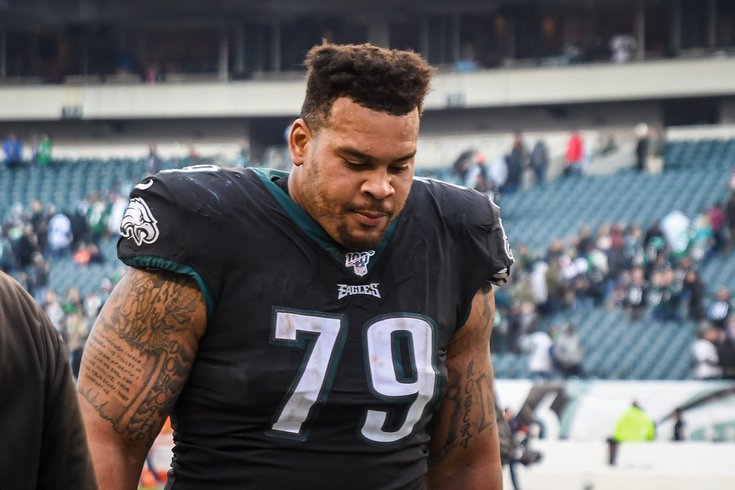 One of the most incredible stories of the Eagles season thus far has been Brandon Brooks, who tore his Achilles last season and has been one of the — if not the — best offensive guards in football this year.

The Eagles decided to pay him like he is. After the team officially announced that Brooks had inked a four-year extension through 2024, Ian Rapoport reported the details:

The #Eagles signed star G Brandon Brooks to a 4-year, $54.2M extension, source said. That makes him the highest paid guard in the league. He gets $30M guaranteed. 💰💰💰

Brooks turned 30 in August but offensive linemen don't exactly age as quickly as skill positions in the NFL. Theoretically Philly has an anchor in the interior of their offensive line signed for the prime of his career. Prior to the extension, Brooks was slated to become a free agent after the 2020 season.

Assuming Jason Kelce does not retire after this year — and assuming that Jason Peters does — the current version of the Eagles offensive line: Lane Johnson-Brooks-Kelce-Isaac Seumalo-Andre Dillard — will be together through at least 2021.

For a team with issues offensively in the passing game, the team is pretty solid at offensive line for the foreseeable future which is one less thing for Howie Roseman and the front office to worry about.

Brooks has not only overcome his Achilles injury, he's also been a beacon of hope for those dealing with mental health as the guard has bravely fought through anxiety issues. He should be a clear choice for comeback player of the year, for the Pro Bowl and to be an All Pro.

#Eagles Brandon Brooks’ 96.6 PFF grade against the Bears is the highest for an offensive lineman since 2015.

He’s the only offensive lineman with an overall grade of 90+ this season (min. 200 snaps)