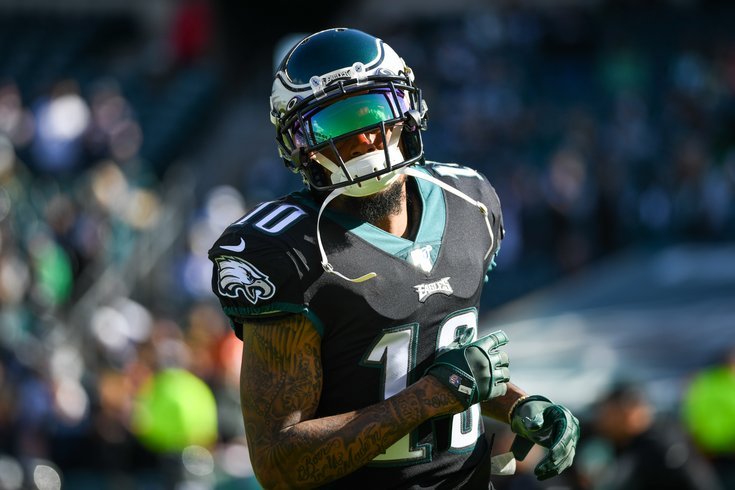 DeSean Jackson has begun rehabilitating the core muscle injury that landed him on the Eagles' injured reserve following surgery.

The specific details of Jackson's injury aren't known, so it's difficult to gauge the intensity of the operation beyond observing that most of us would still be in bed, making occasional heroic trips to the kitchen.

What began as a groin injury soon became an abdominal injury before settling on the "core muscle" description that was used following his early exit from the Bears game.

Whatever the case may be, a video surfaced Tuesday from Jackson's speed trainer, Gary Cablayan, via NBC Sports Philadelphia's John Clark. Jackson is seen doing a light jog, which is actually kind of funny. It's probably the slowest you'll ever see him move.

DeSean Jackson one week after surgery is already lightly jogging 👍🏼

As disappointing as Jackson's injury has been for Eagles fans, it's encouraging to see that he's on the road to recovery and determined to come back with the same blazing speed.

While Jackson is on injured reserve, he technically would be eligible to return if the Eagles were to reach the divisional round of the playoffs. Such a return would seem to be remote. If the Eagles were to make it that far without him, risking his long-term health might be unnecessary, but you can never say never.

Jackson has been training with Cablayan for more than 20 years and credits him with creating the game-breaking speed he's displayed throughout his football career. Earlier this season, Cablayan shared an Instagram video explaining how Jackson's competitive nature is what consistently separates him from other lightning-fast athletes.

Eagles fans were hoping to see Jackson put up highlights all season, but the silver lining is that he's under contract for the next two seasons. Assuming he can recover from this injury, it's not too late for him make another big impact during his second stint in Philadelphia.