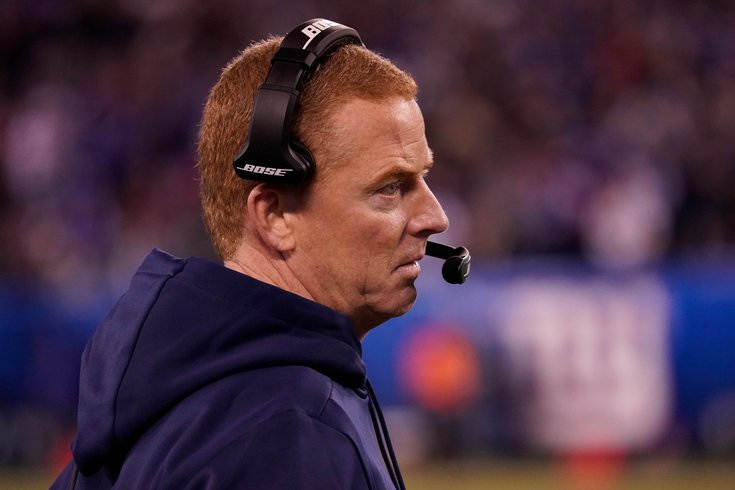 “Tavon, don't return this. We need as much time on the clock as possible. OK now, Dak, after Tavon calls a fair catch, I want you throw it three times to the sideline to the backup TE, and then try a highly improbable Hail Mary. Got it? Alright, go execute.”

Week 10 of the 2019 NFL regular season is in the books, and this is the time of year when teams start dropping from contention like flies. This week, we have a shakeup in the hierarchy, as well as our fifth obituary of the season. That would be the Arizona Cardinals.

Cardinals: At 3-5-1, the Cardinals are done in a loaded NFC West, with almost no chance whatsoever of getting a wildcard. And yet, they're headed in the right direction.

During the 2018 offseason, GM Steve Keim signed Sam Bradford to a one-year deal worth $20 million. A week later, he signed Mike Glennon to a two-year deal worth $8 million. In the 2018 NFL Draft, he traded Arizona's first-, third-, and fifth-round selections (15th, 79th, and 152nd) to the Raiders to take Josh Rosen at 10th overall. And finally, two months after the draft, he plead guilty to an "extreme DUI."

Bradford, Glennon, and Rosen were all gone after one year, and the Cardinals' point differential was 107 points worse than the next closest team in the NFC in 2018. Somehow, Keim kept his job, and was trusted to make the No. 1 overall pick in the 2019 draft.

And finally, he got one right! Kyler Murray looks like the real deal at quarterback, but this is an otherwise terrible roster that needs a ton of work. 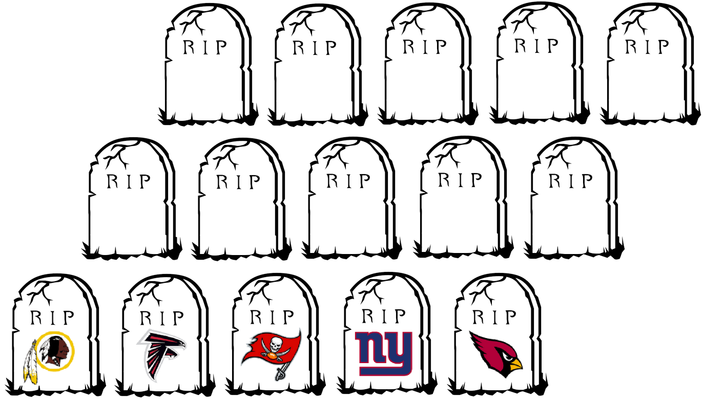 11) Lions (3-5-1): This probably remains an unpopular opinion, but Matthew Stafford is one of the most underrated quarterbacks in the league. Detroit's woeful offense on Sunday with Stafford out is a glimpse of how much worse off that team would be without him.

Anyway, we could have killed off the Lions this week, but we'll wait on that to give them their proper sendoff.

10) Bears (4-5): There's a notion out there that Mitchell Trubisky had a good game because he had 3 TDs and 0 INTs, and the Bears finally won a game. Lol, what? The Bears had 226 total yards and 13 first downs in a game in which their defense forced six punts, two turnovers on downs, and an interception.

9) Panthers (5-4): Ron Rivera got criticized by Troy Aikman during the telecast on Sunday — and subsequently by media thereafter — after Rivera went for two after a TD when the Panthers were down eight (24-16) with about 12 minutes left in the fourth quarter.

The Eagles faced a similar situation a season ago, and Doug Pederson made the same call in that spot. As a refresher, the math on that works as follows:

First, the assumption that you make in this situation is that you need one more TD,, and you need to keep your opponent from scoring again. Duh. You are probably also assuming a 50 percent success rate on the 2-pt conversion, and for the sake of keeping it simple, we'll assume 100 percent success rate on a PAT (though obviously, they are far from guarantees). Here's how the math works:

• 50 percent of the time the Panthers win in regulation if they're able to score again and hold the Packers to no more scores. They would have had the successful two-point attempt, and a PAT on the second TD for the win.

• 25 percent of the time, they miss the first two-point conversion, and get the second, which is basically the same as kicking two PATs.

• 25 percent of the time it goes badly, with a pair of two-point failures.

This concept is well-documented, and in my view, it's really not even a debate. Rivera clearly made the right call, though obviously, it didn't matter since they couldn't score again.

If the media wants to kill Rivera on bad decision making, just get him for punting on 4th and 3 from the Packers' 42 in the first quarter.

8) Rams (5-4): I saw this morning that people were making fun of Sean McVay for pulling Jared Goff on a key 3rd and 2 for BLAKE BORTLES, and then on the ensuing play, he called a fake punt that got intercepted. I "legit lol'd" at the Bortles play.

And then I laughed loudly at the punter's INT:

7) Cowboys (5-4): After the Cowboys' loss on Monday night to the Vikings, Jason Garrett confirmed that he did not want Tavon Austin wasting time on a punt return, via Charean Williams of PFT.

“We didn’t communicate that well enough,” Garrett said Monday. “In that situation, you’ve got a couple of different options. You can go try to block the punt. We decided not to do that. We decided that we thought there would be a good chance that we could get the ball around the 50-yard line. The biggest coaching point for Tavon was make sure you don’t bleed the rest of this time off by spending a lot of time trying to return the ball. So fair catch was a very viable option. The part of it that we didn’t communicate well enough was just simply if you do feel like you have a good return opportunity, take advantage of it. Catch it and go north and south and get as much as you could. We did a poor job as a staff making sure he understood that. Hopefully, we’ll learn from that experience.”

Here's a screen grab of the moment Austin made his catch: 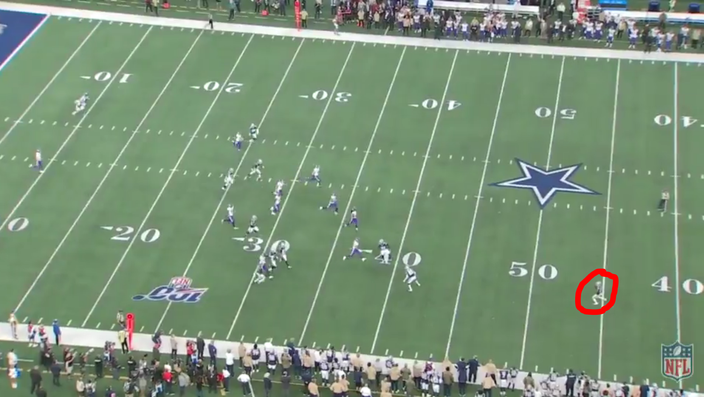 Lol. Of course, after Austin did call the fair catch, Garrett thought that the remaining time left on the clock was better used throwing three sideline passes to the backup tight end for 9 yards, before trying an improbable Hail Mary.

In addition to that disastrous fair catch "miscommunication," Garrett cowardly punted on 4th and 4 from their opponent's 40 yard line in the first half when they were trailing by 14.

Anyway, Garrett's foibles aside, the part of the game that would worry me the most if I were the Cowboys was the Vikings' TD drive in which they just ran it 10 straight times and scored.

6) Eagles (5-4): The Eagles were huge winners during their bye week with the Cowboys' loss and some other good results around the NFC, like the losses by the Rams, Panthers, and Saints.

With the Eagles and Cowboys tied at 5-4 atop the NFC East, let's go ahead and update their side-by-side schedule comparison:

Not only do the Eagles have the advantage of the more favorable schedule (.424 vs. .516), but they also only have one flight left on their schedule, when they make an easy trip to Miami Week 13.

It's all right in front of the Eagles to steal this division after a disappointing first half of the season. The Birds should be getting some players back from injury, and some others already playing through pain should be healing up. There's no excuse not to get it done.

5) Vikings (7-3): The Vikings' Achilles heel over the last half decade or so has been their crappy offensive line, more so than their quarterback situation, in my view.

On Sunday night against the Cowboys, I was very impressed with the way they ran the football, and the way they used the screen game very effectively, particularly up front. Their OL is getting better, and when you combine that with their already very good defense, it's maybe time to start taking the Vikings seriously as Super Bowl contenders.

4) Saints (7-2): After Teddy Bridgewater led the Saints to a 5-0 record with Drew Brees out, the assumption here was that New Orleans could become some kind of juggernaut once Brees returned. That has not happened. The Saints have held the No. 1 spot in our hierarchy for more than a month, but after their really bad loss at home to the Falcons, the Saints are now 2-2 when Brees has started, with a point differential of -11. They don't appear to be any better than the other good teams in the conference.

3) 49ers (8-1): I feel like one of the easiest predictions to make at this moment is that the Niners are going to lose in their first playoff game, no matter where they're seeded. Is there a way to bet on that right now? Please let me know, if so.

2) Packers (8-2): The Packers are in a great position heading into their bye week, as they'll likely get Davante Adams back for a HUGE Week 12 matchup against the 49ers that could have major NFC playoff seeding implications.

And now I'm selfishly realizing that if the Eagles were to make the playoffs, I'll be dreading a very possible cold-ass January trip to Green Bay (though I actually think that'd be good for the Eagles).

1) Seahawks (8-2): Really, you could put the Seahawks or Packers in the top spot here, but Russell Wilson is just so freaking good.