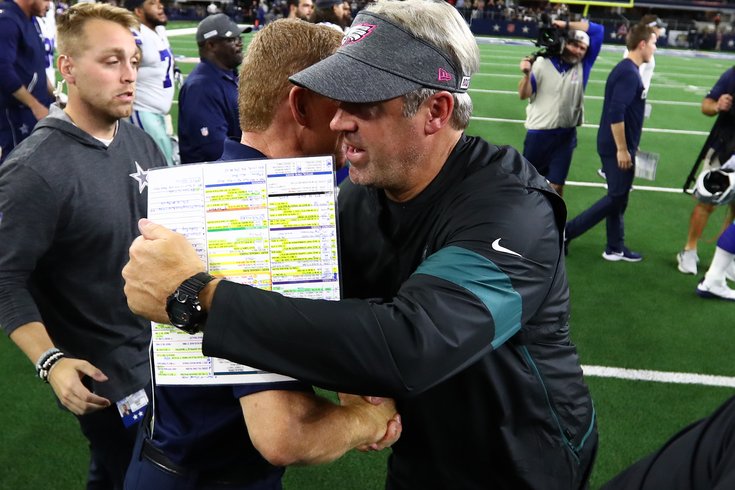 If the Philadelphia Eagles played in any other division in the NFC, their season would already pretty much be over. Luckily for them, they play in the craptastic NFC East, where there are a pair of bottom four teams in Washington and the Giants, as well as the perpetually underachieving Cowboys, who are doing everything in their power to keep the Eagles alive.

As you all saw, the Cowboys were handed an embarrassing loss on national television by the Buffalo Bills, thus bringing their record to 6-6. The owner had tears in his eyes, a player (it turned out to be Michael Bennett) screamed at the team for a while, and it was a Happy Thanksgiving across the Delaware Valley.

The Eagles, should they take care of business against a very bad Miami Dolphins team this Sunday, will once again be tied with the Cowboys atop the NFC East:

Before we get to the tiebreakers, here's what the Eagles' and Cowboys' schedules look like the rest of the season:

Here's how divisional tie-breakers work in the NFL:

Obviously, if the Cowboys beat the Eagles Week 16, they will own a 2-0 record against them this season, and will almost certainly win the division. The only mildly feasible way the Eagles can win the division despite getting swept by Dallas would be if the Eagles won their other four games, and Dallas lost at least two other games.

If the Eagles beat the Cowboys Week 16, that's a split. The next tie-breaker is divisional record, and there's a good chance that both the Eagles and Cowboys will sweep the impotent Giants and Washington team. That means it would go to the third tie-breaker, common opponents.

Here are the Eagles' and Cowboys' common opponents, with their results so far:

Got it? Soooooo, basically, win Week 16 vs. Dallas, as well as the three remaining games against the Giants and Washington, and the Eagles will be the 4 seed, with a home playoff game in the wildcard round.