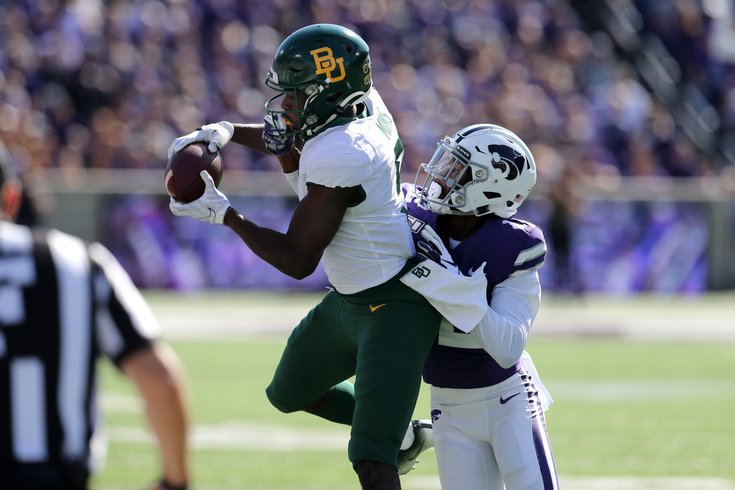 Baylor's Denzel Mims is a big receiver with a background in track.

Mims is a little raw as a route runner, but he has good size, a track background, and good production at Baylor over the last three seasons:

As such, he's going to be of interest. A highlight reel:

Mims will compete at the Senior Bowl, and is expected to fare very well at the NFL Combine. Assuming he does, a late Day 2 / early Day 3 pick would probably be appropriate value.

Humphrey is a redshirt sophomore who is already good enough to enter the NFL Draft and be selected somewhere in the first two rounds, if he does. He doesn't possess Jason Kelce's athleticism (nobody does), but he excels where Kelce struggled earlier in his career -- anchoring in pass protection, and getting movement in the run game with power and leverage.

A closer look at Humphrey:

The Eagles will need a replacement for Kelce whenever he retires, which could be soon, and it will be interesting to see what type of player they prioritize in front of Carson Wentz. I believe Humphrey makes sense as a center who does not often allow the pocket to collapse, and would give Wentz the ability to move around and escape when necessary. I like his value in Round 2, but he could be gone by then.

Lawrence had good numbers in 2018, when he had 54 tackles (10 for loss), 4 sacks, and 3 batted passes. Had he declared for the NFL Draft, he probably would have gone on Day 2, or early on Day 3 in a loaded D-line draft. Instead, he stayed at LSU for his senior season, got his ankle rolled up on early in the season, and has experienced a down-tick in production as a result.

Through 9 games, he only has 19 tackles (4 for loss), 2.5 sacks, and 3 batted passes, though he did save his best game of the season (4 tackles, a half sack, and 2 batted passes) for LSU's huge win over Alabama.

I think he fits Jim Schwartz's scheme as a rotational penetrating DT, but would have concerns with his ability to take on double teams in the run game.

Hightower was a JUCO transfer who is now a senior at Boise, but with only two years of experience at the D1 level. His numbers:

As you can see, Hightower has a good yards per catch average. However, he's also a beanpole at 6'2, 171, so there will be concerns about his ability to beat press coverage at the next level. A highlight reel, where you can see his speed:

Hightower makes sense as a late round developmental speed guy with some added value as a kick returner.

Since 2014, Ohio State has had a defensive back selected in every draft, including 10 draftees overall, and six first-round picks:

Fuller (and a bunch of other Buckeyes) will be next. While he won't scare opposing receivers as an enforcer over the middle, Fuller has great athleticism, and can cover a lot of ground in the deep middle. He can also stick with slot receivers, and has the height to cover tight ends.

I like Fuller in the Eagles' scheme in the Rodney McLeod role.