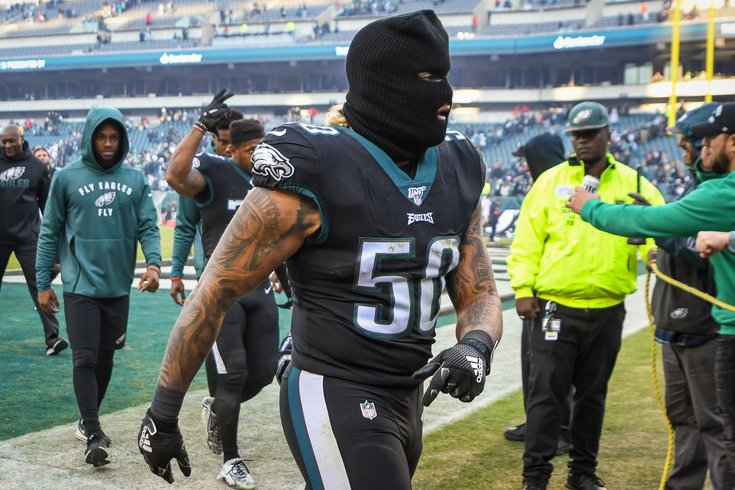 If the Eagles lose to the Giants on Monday night, this is what the players will have to wear out in public moving forward.

The Eagles have lost three straight games, while the Cowboys try to hand their division rivals the NFC East on a silver (and blue) platter. The first two hurt, but weren't entirely unexpected. The third, to the lowly Miami Dolphins, was crushing, and turned the Eagles, at least for a few days, into the laughing stock of the league for allowing Ryan Fitzpatrick and the Miami offense to score touchdowns on five straight drives.

But a loss on Monday night, at home, to the 2-10 Giants — especially in light of what Dallas did on Thursday — would hurt the most. Not only would such a loss keep the Eagles out of a tie for first place in the division; not only would it be their fourth straight loss and drop them to 1-2 in the division; but it would also likely come at the hands of Eli Manning, who is likely to start against the Birds — possibly for the last time in his career? — following an ankle injury to rookie Daniel Jones.

If you thought this city was fired up after the loss to Miami, this would cause an immediate Code Red in Philadelphia. The loss to the Dolphins seemed like rock bottom for this Eagles team, but remember: it can always get worse.

Beyond what a loss would mean to this team's chances at making a playoff run, it would also be a damning indictment of the current state of affairs at the NovaCare Complex — and might even lead to someone getting fired. Hell, that might happen either way by the time this season is finished.

And if the Eagles keep losing, this season will be over before Week 17. Unless, of course, Dallas continues to be just as dysfunctional (maybe more so) than Philly, so...

Anyway, the good news is that our writers seem to be confident the Birds can come out of Monday night's game with a win. The bad news is, that's the same thing we all thought last week. Oh well. Here's everything you need to know for this week's matchup, including how we see the game playing out.

Eli Manning will very likely be starting against the Eagles on Monday Night Football, as he will replace Daniel Jones, who will be sidelined with a mild ankle sprain. Jones thinks he can play through it, and as such, conspiracy theories have arisen on why Manning is replacing him anyway. They range from getting asses in the seats again to see Manning play a few final games, to keeping Jones from playing badly the rest of the season so there will be no calls for the the Giants to draft a quarterback in the first round again in the 2020 NFL Draft.

I don't buy either of those, to be clear, as they don't make much sense to me. How many dorks are buying tickets just to see Eli Manning lose a game in an already lost season? And clearly, the Giants have more than proven that they don't care what their fans think they should do in the draft.

That said, if I may propose a conspiracy theory of my own, it could be that the Giants are trying to lose. 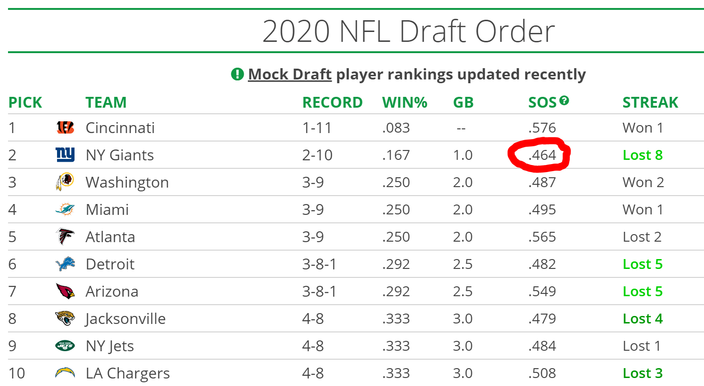 As you can see, there are three teams below them at 3-9, all of whom are more like 2 games back of the Giants because the Giants' strength of schedule, which is the first tiebreaker in draft order, is also super weak. If they win fewer than two games the rest of the way, they pretty much have at least that No. 2 pick wrapped up.

Should they lose out and the Bengals win just one more game, the Giants will have the No. 1 overall pick.

And so, while the Eagles can't be trusted to beat anyone at the moment, I do trust that they should be able to handle this garbage team at home that may or may not be begging the Eagles to beat them. I know this is crazy, but I'll lay the 9.5 points.

I don’t know where to even begin trying to figure out what on God’s green Earth the Eagles are going to look like on Monday night.

One would think the gift of new life from the futile Cowboys losing Thursday would put a little spring in Philly’s step — but they had no such spring in the exact same scenario last week when they lost to the even-more-futile Dolphins.

Against New York, Eli Manning’s return has to give the Eagles a bit of an edge, and perhaps his “rust” could give the Eagles' struggling secondary a chance. I also think the pass rush will be licking its chops with a sitting duck under center in this one. Saquon Barkley has not looked great this year — though I do have some fear he will Monday.

Still, I just can’t pick the Giants. The Eagles will get a share of first place Monday.

I was so close to bucking the trend and being the only one of the group to pick the Giants, but I just can't see the Eagles losing four straight games. Last week's loss in Miami was a classic trap game, and I think if those two teams played 10 more times, the Eagles, as bad as they've looked at certain points this season, would win 10 games. (OK, maybe it would only be eight or nine, but you get my point.) The Eagles overlooked the Dolphins last Sunday, and they paid the price.

This week, under the South Philly lights and facing a division rival, I don't expect the same letdown, especially from the defense. Eli Manning starting instead of Daniel Jones is an interesting wrinkle, but look for the front seven to feast on the slow-footed Manning in his first start since Week 2. They've terrorized him in the past, and with the Giants' current offensive line, that could be the case again in this one.

Speaking of the Giants offensive line, they can't even seem to create enough push to give Saquon Barkley a solid rushing lane, as he's failed to rush for over 83 yards in a game since mid-September. (Of course, his high-ankle sprain earlier in the season played a role in this). If the Eagles can keep him in check on Monday, and force Manning and the Giants to beat them through the air, it should bode well for an Eagles defense that had been playing extremely well in recent weeks before the debacle in Miami.

On the offensive side of the ball, the Eagles will likely still be without Jordan Howard, who still hasn't been cleared for contact after suffering a stinger back in Week 9, and may also be without Nelson Agholor, who played one of his better games of the season last week against Miami. Still, the Eagles should have enough to beat the Giants in this one.

My prediction last week was that not even the Eagles were bad enough to lose to the Dolphins. Whoops. So this week I decided to do a coin flip simulation to determine the winner.

The Giants (heads) came up 3 times, the Eagles (tails) won 7 times. That’s as much thought as I’m willing to commit to predictions with this team right now.

I don’t believe the Eagles, whose season I firmly believe is over, are this good. I just feel the Giants are this bad — right now. If the Eagles are going to stomp on their NFC East neighbors up North, now is the time. Ask yourself who you would like to be a fan of, looking strictly from a futures perspective: The Eagles, with their aging corps and thin skill-position area, or the Giants, who have a young, improving quarterback, a slew of draft choices coming and one of the most dynamic runners in the game? The Eagles get the flailing Giants this time, which proves nothing. Next time may be different.

This is a must-win for the Birds, and after the Dallas loss Thursday night I’m feeling they’re going to come out hot at home against the Giants, especially since it’s looking like they’ll be facing old foe Eli Manning. If the defense can get back in a groove to do what they did against the Seahawks and Patriots, they can shut him down.

MORE: The evolution of this gross Eagles season, week-by-week, in stick figure form