According to ESPN's Chris Mortensen, those potential changes would not include head coach Doug Pederson 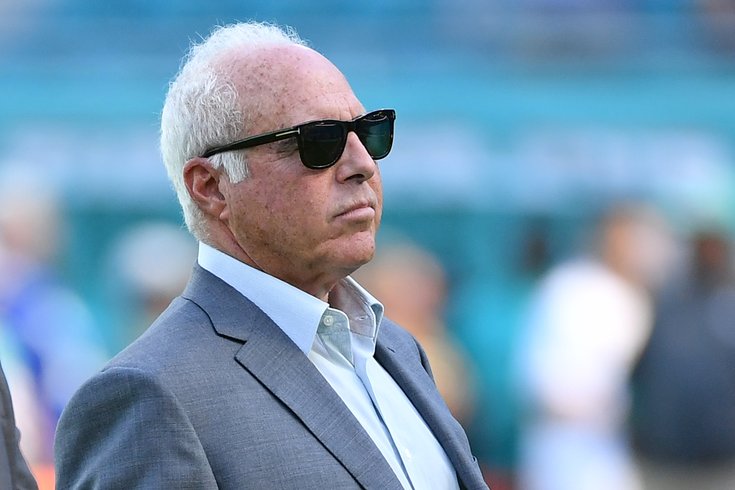 Staring at the television in utter disbelief as the Dolphins celebrated their 37-31 win over the Eagles, there was only one thing in my mind: This is the kind of loss that gets someone fired.

Unfortunately for the Eagles, they somehow (thanks to a horrible NFC East) still control their own destiny in the division and could make the playoffs, so firing someone right now — assuming you still have playoff aspirations — doesn't make a ton of sense.

Head coach Doug Pederson admitted as much on Monday at his weekly day-after press conference. Here's the back and forth with Jeff McLane, who asked Pederson if there would be any shakeups this week in an effort to send a message to his players and the rest of his staff.

Will you make any coaching changes this week to send a message?

Will you make any personnel changes in terms of who is starting?

So you don't think a shakeup is in order?

"I know what you're saying. You're talking about sending a message. No, I don't [think a shakeup is in order]. Everything, it's all self-inflicted. It's all — even the plays they made, our players were in position to make those plays, we just didn't. They executed, we didn't. And so that, to me, doesn't deserve any kind of shakeup... No it doesn't."

If you take the head coach at his word, the Eagles won't be firing anyone this week. Of course, that could change if the team loses at home to the Giants on Monday night, which didn't seem possible before Sunday, but hey, anything is possible now.

While an in-season change could still happen — and would be more likely to happen if/when the Eagles are officially eliminated from playoff contention — there are likely some changes, both on the roster and among the coaching staff, awaiting this team once the season concludes.

According to ESPN's Chris Mortensen, those changes could be "significant" if the Birds don't right the ship and make a playoff run. Here's what Mort said on Monday, courtesy of John Barchard:

"I haven't spoken to Jeffrey Lurie, the Eagles owner, and he hasn't replied to a text either, but I do know his history. Even when Andy Reid was coaching in Philadelphia, he will hold people accountable if you are performing below expectations. Right now, the Eagles are performing below expectations. Barring a run in the playoffs, I would say that there are going to be some significant changes on the Philadelphia staff. I'm not saying Doug Pederson will get fired, but I think there will be some staff changes, significantly..."

For that being such a short quote — it was only a 30-second clip — there's a lot there.

First, there's the fact that Mort hasn't talked to anyone in the organization about this, and is rather basing this off what he knows about Lurie from the past. That's not to say Mort is making this up. He's clearly one of the most plugged-in guys in the NFL and all of this tracks, as significant changes need to be made if this team continues down its current path.

Second, there's the line "barring a run in the playoffs," which makes it sound like the team needs to do more than simply win the NFC LEast. That's encouraging, because it suggests that the Eagles wouldn't be happy just sneaking into the playoffs because their entire division is dreadful. Instead, they'd want to at least make it as far as they did last season, which is the right move based on the talent level of this team and the expectations placed on them heading into the year.

Third, Doug Pederson is safe, which seems fair all things considered. He did just win the Super Bowl two seasons ago. And sure, he may have simply caught lightning in a bottle, but the grace period after delivering a franchise its first-ever Lombardi trophy is typically more than two years.

Finally, what constitutes a "significant change?" With Pederson being safe, that would suggest that at least one (if not both) of the coordinators are on the hot seat. Jim Schwartz has done a solid job at coordinator, although there have been times that have left fans wanting. He however, seems to be in a better place than his offensive counterpart, Mike Groh, who took over for Frank Reich following the Super Bowl and has overseen a massive regression by the Eagles offense. If one of the two is let go after the season, the money would be on Groh.

There's also special teams coordinator Dave Fipp, whose unit was beaten for a touchdown by that Dolphins trick play on Sunday. Other coaches that could be on the hot seat based on how their units have played this year are WR coach Carson Walch and DB coach Corey Undlin. Additionally, given Carson Wentz' struggles at times this year, QB coach Press Taylor could find himself out of a job this winter.

But then there's the other guy. He may not be a coach, but oversees the entire roster and has final say over the players the previously mentioned coaches have to worth with on Sundays. And that's Howie Roseman. In his first year without Joe Douglas by his side, Roseman hasn't been all that impressive, signing older players and bringing back several former Eagles, many of whom haven't worked out this season.

Earlier on Monday, before the Mort report, NBC Sports' Reuben Frank speculated about just this:

This team needs an overhaul. There’s no ignoring it now.

And it doesn’t start with Howie Roseman rolling up his sleeves and figuring out what moves to make. What former Eagles to bring back this time around.

No, it has to start with Jeff Lurie being truly honest with himself and examining whether the personnel department needs a major restructure.

Lurie will never fire Howie. But would he transition him into a role where he focuses on contracts and salary cap while a GM comes in and gains final say over personnel? It’s not unthinkable. It couldn’t hurt at this point.  [nbcsports.com]

It wouldn't be the first time Howie had some powers stripped away and was given a lesser role. And it's no secret that Howie excels at salary cap management and contract negotiation, while his personnel decisions are at times questionable — that's why Douglas was hired in the first place.

It may not be a coaching change, but shaking up the front office like that would certainly be considered a "significant change."