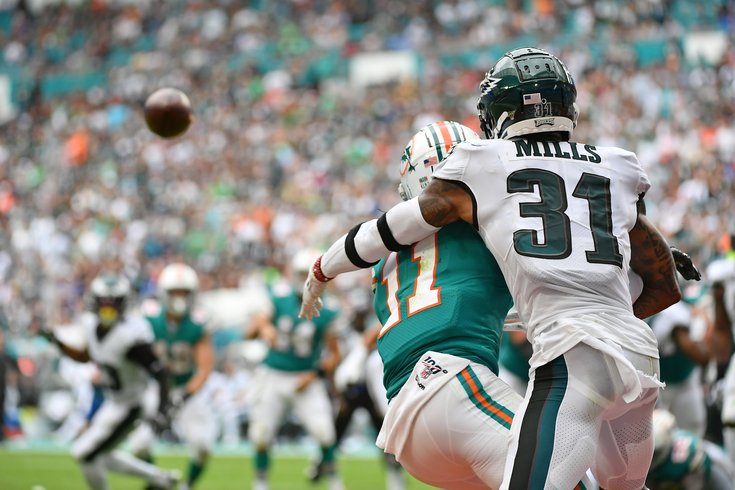 The Eagles' defense committed plenty of mistakes on Sunday.

Remember when the Eagles had dropped back-to-back games to elite NFL teams as they pondered whether their franchise quarterback was good enough?

Those were the good ol' days.

Needing a simple victory over one of the biggest cupcakes in the league, the Eagles had the chance to assume a share of first place in the NFC East in Miami Sunday. It was "just what the doctor ordered," according to pretty much every single NFL expert making their pick this week.

And then, improbably, impossibly, the Eagles lost.

They gave up 409 yards. They committed 10 penalties for 91 yards — many of them costly by way of points or extending life for the Dolphins. They dropped passes and made stupid mistakes. They forgot how to cover and once again got beaten by a trick play. And, in the process, they may have ended their season in embarrassing fashion.

"We are still a good football team," Pederson told the media after the loss. "It's about what we do. We've self-destructed in a couple areas today.

For the second straight season, Ryan Fitzpatrick looked like a Hall-of-Famer against the Birds. DeVante Parker looked like an All-Pro, and the defense looked like it had no idea what it was doing.

Philly allowed the Dolphins to score on five consecutive possessions, if you take out Miami's one-play drive at the end of the first half. They ran the ball only 19 times against a team ranked 31st against the run (while throwing nearly 50 passes).

"This is the NFL. They competed, they competed hard," Pederson said. "I think whats deflating is, we always control what we can control and it's about us and not to do the things we are capable of doing today, the lack of consistency all around, that's the most disappointing thing."

The Eagles, at 5-6 coming into the game off of two losses in a row, were double digit favorites in every sportsbook. All they did was let the rebuilding Dolphins, who traded away several starters on both sides of the ball earlier this season, score the most points for the franchise since 2016.

"Record does not indicate anything about them at all," Pederson said, calling the now 3-9 Dolphins a "good football team."

That can't possibly be true, can it?

Miami entered Sunday ranked in the bottom three of all 32 NFL teams in scoring, total offense, and total defense.

It certainly sounds like "coach speak" at its most brutal.

"For me, my belief in everybody in that locker room doesn't change," Carson Wentz said after a decent, but not spectacular performance. "We fell short today, it's not ideal to come in here and lose a game but I have a lot of faith and a lot of belief, I have seen crazier things."

Perhaps the worst part of all of this is that the season is still very much alive. Even at 5-7, the Eagles trail the 6-6 Cowboys by a single game, and the two play in Week 16 on December 22. If the Eagles can win out, defeating the Giants twice, the Redskins and the Cowboys, they'll be NFC East champs by way of tiebreaker.

"As crazy as this is, I would say it's a long shot, but we are not out of it," Pederson said. "We have four division opponents coming up. The guys have to understand that. That's part of my job, to make sure they understand that."

It's nearly impossible, improbable to take the leap of faith necessary to believe that this football team is capable of making the playoffs, but as we saw Sunday, the impossible, the improbable can happen.

"I have to give them and show them where we are, and what we need to do with these four games," the coach said.