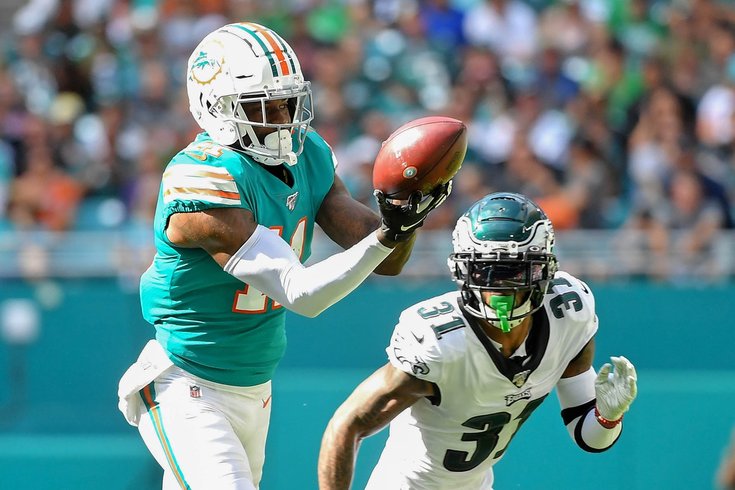 If you were hoping for the Eagles to come out and beat the stuffing out of a terrible Dolphins team, well, you must not have watched most of their games this season. They are slugging it out with one of the league's worst teams, leading 21-14 at halftime.

• I have no idea how the Eagles avoided a pass interference call on the first play of the game, but in a season where they haven't received a ton of breaks, they will gladly take it. Have to capitalize when you have chances, and Ronald Darby did just that.

The offense almost pissed the opportunity away on the very next play, with Zach Ertz falling down on a pass that probably should have gone for a touchdown, giving Miami a golden opportunity to steal a turnover of their own. Fortunately for the Eagles, the Dolphins stink, so hope remained.

And it seems quite fitting that the drive was capped off with a basic swing pass to Miles Sanders, one week after Wentz struggled to hit the rookie on short passes, and Sanders waltzed in to put the Eagles on top.

Not a bad start.

• Jake Elliott has been absolutely money this year. Hard to care too much about the kicker when the team around him has been aggressively mediocre, but he earned his extension.

• Yes, the Dolphins' offensive line is a steaming pile of trash who the Eagles should dominate up front. But they still had to go out and accomplish that mission, and Philly looked great in the trenches from the opening drive, swarming Ryan Fitzpatrick in the pocket from all angles.

It was a group effort for the Eagles. Josh Sweat came up with a big third-down sack, Fletcher Cox was bulldozing the interior, and Derek Barnett got involved in the action as well, which is a nice change of pace from the cavalcade of dumb penalties he took early in the season.

• There have been times where Carson Wentz was at the heart of Philadelphia's offensive issues, but he was mostly good in the first half on Sunday. He was let down by his receivers on multiple occasions, and though he missed a throw or two himself, Wentz threw some of his best balls of the season in the first half. Again, competition isn't exactly stiff this week, but he's doing what needs to be done so far.

(And by the way, I loved that the Eagles actually went to some designed rollouts for Wentz in the first half. Been begging them to do it for weeks, and the offense looked crisp when they did so. See, this stuff really isn't that hard.)

Good half for Nelson Agholor as well, especially in the back of the endzone on Philadelphia's successful two-point conversion. He actually tracked a ball for once in his life, what a change of pace.

• I think Greg Ward acquitted himself well in his first appearance last week and was one of the only guys to do so. But Ward getting on the field in 11 personnel over J.J. Arcega-Whiteside, a second-round pick from this year, is not an especially great sign for the future.

A player who in theory should be a big part of their future is still getting boxed out for playing time by a player who the team left on the practice squad until an emergency scenario emerged. Is it because of a disconnect between what the head coach wants and who the GM is drafting? Is the GM just bad at identifying young talent? Not sure what the issue is.

The good news is he finally got the first touchdown of his pro career to close out the first half, coming through for Wentz after he extended a busted play with his legs. The long national nightmare is over. Let's hope he can keep building on this, because the Eagles need every bit of help they can get at wideout.

• While we're on the topic of bad wide receivers, Mack Hollins is absolutely useless. He's a better fit for the Arena League, in the sense that a league that has gone bankrupt and won't exist anymore is the proper place for him to play.

The Dolphins' kicker has more TD receptions than Mack Hollins and J.J. Arcega-Whiteside.

• Boy, has it been a rough couple of weeks at the office for Ronald Darby, who was slowly starting to work his way back into favor. After getting run over for a decisive Seahawks touchdown last week, Darby's struggle of choice this week is apparently covering DeVante Parker on jump balls.

On the first completion that went for a touchdown, I actually give most of the credit to Fitzpatrick and Parker, who made a great throw and catch to come up with six points. But on the second-quarter connection, which did feature a bit of a push-off from Parker, Darby was never really in a position to make a play in the first place, and it helped the Dolphins extend a drive that looked dead in Miami territory.

The mark of a mediocre/bad team is when it's a different thing going wrong every single week. The secondary regressing big time as other parts of the team step up feels about right for this group.

• Not sure why the intentional grounding rule even exists if you're not going to call it in obvious situations. Miami got away with a blatant one on their first scoring drive, and there's no way they're in a position to score if the officials had just enforced the existing rules.

And hey, I think the officiating crew made the right call to overturn the pass interference call in the second quarter, but they haven't been overturning those plays all season, so I was a bit stunned they finally decided to enforce the rulebook in that respect.

Actually, you know what, there's no reason to make fun of gadget offense and trick plays being utilized against the Eagles, they have shown zero ability to recognize, respond, and react to them. The Dolphins caught them with their pants down on a wild trick play midway through the second quarter, utilizing their punter and kicker of all people to score on fourth down.

This is the best play of the year. pic.twitter.com/AYqcKB9Ayh

Credit to the Dolphins for pulling something out of the bottom of the bag of tricks, but come on, dawg. Not even one guy stays home there? It's the punter threatening to run it in, not goddamn Barry Sanders. Absolutely no discipline. And if they were that unprepared for this play, Doug Pederson also could have called a timeout to avoid disaster.