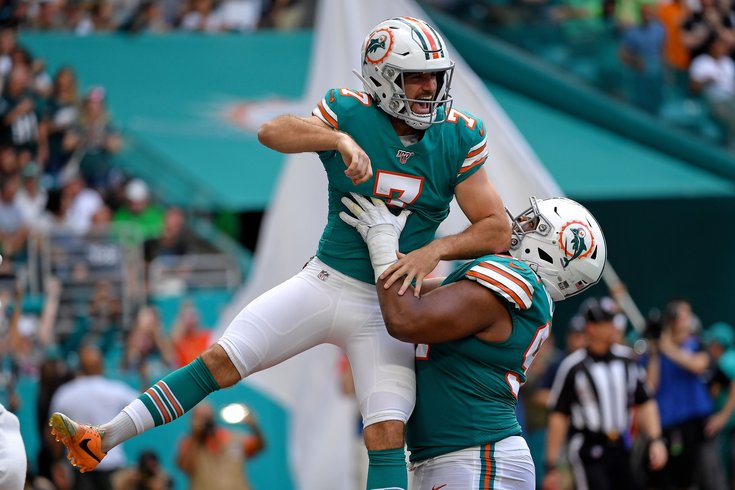 The Eagles are a bad football team, and they did what bad football teams do against the Miami Dolphins, playing down to terrible competition. Giving up more points than any team has to Miami all season, the Eagles will be heading home from South Beach with their heads hanging in shame following a 37-31 loss.

This is the sort of loss that inspires major questions about the team's foundation. Here's what I saw.

• Before we get to the fire and brimstone, some quick hitters...

One of the only reasons reason I think you can be optimistic about the long-term for Carson Wentz and the offense is that they've been able to (and have had to) manufacture long, methodical scoring drives in the absence of any sort of deep threat. If you get a burner on this team who can take the top off, I do believe they will become a lot more dangerous. Unfortunately, that's firmly in the next season category, so they have to get by with what they have, so play design is going to be critical.

• This has been far from a special season for Alshon Jeffery, but the separation between him and the rest of the healthy Eagles receivers is immense. The offense looks quite different with a big, tough target for Wentz to throw to, and it was not just the second-half touchdown where Jeffery shined on Sunday. Philadelphia's vet wideout hauled in some tough catches along the sidelines, living up to his reputation as a contested-catch master that has faded a bit this year.

In fact, with some better throws from Wentz, it would have been an even bigger day for Jeffery, who seemed to be getting open at will against Miami's corners. He should be primed for a big stretch run, assuming he can stay healthy.

• I was skeptical of Miles Sanders in the early portion of this season, but after working through some rookie struggles, he has been one of the offense's best players. Hard to know who or what to credit here — the benefits of film study, improved line play, etc. — but he has been decisive with the ball in his hands, and that has led to a marked improvement for the rookie back.

Volume was really the only thing holding him back against Miami, but Sanders' improvement gives the Eagles more options when Jordan Howard returns to the lineup. With teams now having to fear Sanders between the tackles, it makes play-action calls more dangerous with him on the field. The whole playbook is available with Sanders.

• DeVante Parker just absolutely abused the Eagles' secondary on Sunday afternoon. There was nothing all that fancy or complicated about it, Miami just threw him the ball with a chance to win one-on-one battles and he came through over and over again. Ronald Darby was the victim of a couple of great Parker catches in the first half, and Jalen Mills joined his teammate in the second half after getting beat for a touchdown that kept Miami in the game.

Wouldn't it be nice for the Eagles to have a guy who could change a game at receiver? Where do you get one of those? Ah wait, I seem to be getting a message on this from the voices in my head.

DeVante Parker was available for almost nothing in a trade each of the last two years. Eagles traded a 3rd for Tate and a 4th for Avery.

• Are we sure Congress did not pass a law stipulating it is illegal for the Eagles' defense and offense to play well at the same time? It is easily the most frustrating thing about watching Philly from week-to-week. With the offense finally finding its footing after a brutal stretch, the defense took a step back against one of the league's worst teams, allowing them to hang around far longer than should have been possible.

I've said this 100 times this season, but that's the sign of a bad football team, or at least not a good one. The lack of consistency lets you know you shouldn't trust this group, and I think everyone would save themselves some anxiety if they adjusted their expectations accordingly.

Frankly, I didn't even understand what the Eagles were doing on some of the big conversions for Miami. Even as an advocate for variety in scheme, dropping Josh Sweat and Derek Barnett into zone coverage on a passing down is pretty mystifying. Ideas should make sense on paper even if they aren't executed well, and the Eagles were miserable in both respects on Sunday. That's how you end up giving up a season-high in points for the Dolphins before three quarters are even over.

Letting the Dolphins score touchdowns on five straight drives is arguably the most ridiculous display of ineptitude they've had all season, and that is really saying something. Use any adjective you'd like to call out this performance: embarrassing, ridiculous, unacceptable, bush league, they all fit. Jim Schwartz and his guys should be ashamed. It's effing Ryan Fitzpatrick.

• By the way, Doug Pederson deserves a lot of heat for this performance as well, even if defense was the primary issue and Schwartz has a considerable amount of power there. It's one thing after another after another with this team, and the guy who is supposed to connect all the dots and bring in the right people to put out fires is Pederson. If a football team is a reflection of the head coach and quarterback most of the time, it doesn't look great for those parties.

That doesn't mean Pederson has to be fired, which is everyone's first reaction when a coach's competence is brought up, but it does mean the Eagles need a stronger and better infrastructure around Pederson to win with him as the head coach. The task in front of Howie Roseman and Pederson is figuring out which buttons to push, which guys to kick to the curb, and which guys can be a part of the next good Eagles team. There is a lot of work to be done this offseason.

And hell, let's talk about Roseman for a second too, because the team has squandered picks and opportunities like it has been going out of style lately. It seems like every week there is a guy who they could have acquired for a modest price tearing them up or tearing some other team up, while the Eagles have burned picks on guys who can't or don't play. I would have to check the numbers after the game, but Roseman traded a fourth-round pick for Genard Avery, who played 15 snaps in the three previous games combined.

I think a drastic move could be coming this week. It will have been earned

• It wouldn't be fair to pin the blame on the offense with how terrible the defense was against the Dolphins, but I will say I didn't really understand the decision to go away from the running game on a day where Sanders was absolutely cooking and the game was never in "must throw" territory. You have a guy who is averaging nearly five yards per carry and has been your most consistent offensive player through the good times and the bad. Using him feels like it would be a smart thing to do.

And as much as Wentz improved this week vs. the last two, he left a lot of throws on the table against a terrible defense. Alshon Jeffery was abusing matchups on the outside, only for Wentz's throws to sail too far in one direction or the other, dropping harmlessly to the turf or drifting out of bounds.

Picking up three touchdowns is huge, but again, the bar is and should be set high for him, and he is missing throws that a franchise quarterback has to make. Even if he's not the primary problem, he's not the guy pulling them out of the muck, and that's what he got paid to do.

• Speaking of plays that have to be made, Zach Ertz came up small on Sunday. After falling down on what looked to be a sure touchdown in the first half, he had an inexplicable drop in the second half that led to a drive stalling out, and then a third one late in the game with the Eagles in desperate need of a touchdown. Ertz is a favorite target of Wentz's and a guy who has done great things for this offense, but defenses have done a better job than ever at shutting him down.

There's a case to be made they should be exploring trades for him this offseason in an effort to try to add more explosive pieces to the offense. Perhaps that window has already shut — his value would have been much higher before this season than after it, but hard to play the hindsight game there, considering where people thought this team would be vs. where they are.

• Jay Ajayi looks absolutely cooked. No decisiveness when he runs and his pass blocking was poor when he was asked to contribute in that department. They need Jordan Howard back pronto.

• After praising Jake Elliott in the first half for being a model of consistency, I take full responsibility for him missing a second-half field goal that kept the game within reach. Fair is fair.

• I thought the officials were piss poor for basically the entire game. Not the reason the Eagles lost or really anywhere close, just had to make sure that was noted here somewhere.

• Ronde Barber evidently is not capable of recognizing the difference between Mahjong and dominoes, as he confused the two games during Fox's standard local street shot to begin the fourth quarter.

By the way, this was tweeted three-and-a-half years ago and still remains true. The Kenny Albert Curse is real!